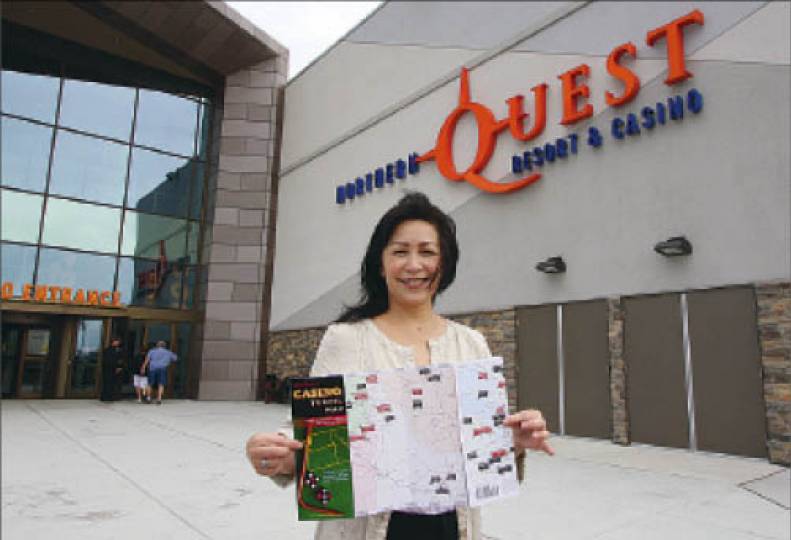 -—Staff photo by Kim Crompton
Vicki Dar, pictured at the Northern Quest Resort & Casino, expects to augment her map and Web site with a monthly magazine.

Ever watchful for promising opportunities, it took entrepreneurial Spokane publisher Vicki Dar little more than a chat with her daughter to come up with her latest product, the recently introduced Northwest Casino Travel Map.

The six-panel folding chart, printed on heavy stock with a plastic-like coating and priced at $6.95, shows the locations and some of the amenities of the more than 50 tribal casinos in Washington, Oregon, Idaho, and Montana. It also lists addresses, phone numbers, and Web sites for the casinos, and offers a few tips for creating an enjoyable gambling trip.

Dar is producing the map through her 24-year-old Spokane-based company, Eagle Publishing, which has served as her launching pad for several other publications she no longer owns, and has set up a Web site, ILuvCasinos.com, to support its distribution.

She says she hopes to begin customizing the maps soon for tribes that want to have their casinos featured prominently on its cover, and expects to launch by early next year a monthly magazine focused on Northwest casino happenings.

Her new venture is targeted at tribal-gaming enthusiasts who also like to travel, yet Dar admits she's never been to the gambling mecca of Las Vegas and "had hardly stepped into a casino" until a few years ago.

"I have this publishing illness," she says, smiling broadly while reflecting on a career-long pattern of starting one resource-oriented publication, then moving on to launch another.

Coming up with an inspiration and then transforming it into ink-on-paper reality is what energizes her, rather than the more mundane, long-term management responsibilities that are required once a publication has matured, Dar confesses.

"It's the fun part, it's the interesting idea—seeing it in print and having it work," then doing it all again, she says.

Dar operates Eagle Publishing from a 100-year-old home at 328 E. Indiana that she restored, and lives there part time. She currently is the company's only employee, though she contracts with other people for some services. She also has an office in Redmond, Wash., in a building occupied by a textile company that is one of Eagle Publishing's clients, and stays in a condo while working there.

"Our operation is pretty much 'virtual,' and I like to spend time on both sides of the mountains," she says. "My graphic designer operates from Portland, and my salesperson is here in Spokane, but has a home office and travels a great deal."

Before her current endeavor, and in a pattern that largely reflected her own experiences and primary interests at the time, she published a parenting guide from 1986 to about 1994, a magazine called Inland Northwest Family from 1993 to about 2000, and Northwest Woman magazine from 2000 to 2004.

"My publishing has sort of followed my life," she says.

Northwest Woman still is operating under a different owner, she says.

All of her publications except for one—a teen-focused magazine that proved difficult to distribute effectively and that she shut down after just two issues—were profitable from the start, partly because of her intensive hands-on operating style and lean budgeting, she says.

"I never operated extravagantly. I guess that wasn't the goal. The goal was to do what I loved," she says.

For a time, between about 1995 and 2000, Dar also operated a business that conducted corporate book fairs—fundraising events that involved setting up temporary bookstores at client companies' locations and giving back a part of the sale proceeds for donation to a designated charity. She discontinued that venture, though, around the time she started Northwest Woman, she says, because it was diverting too much of her attention and energy from publishing, which remained her primary interest.

Over the last five years, while she has been mulling new publishing ventures, her company has continued to generate revenue by producing a quarterly, globally distributed magazine called Asian Fabric for a Redmond-based client, which produces colorful cotton fabrics used mostly in quilts. Her involvement with that company, where she keeps her West Side office, has provided her "a whole different experience in publishing" and has enabled her to do some traveling to Asia, she says.

Dar got the idea for the casino travel map last year when her 23-year-old daughter, Carly, wanted to take a trip through Washington and Oregon visiting casinos, but couldn't find a good overall resource to use in planning her trip. Dar began doing research for her new venture, and says she has taken a liking to blackjack because it's a game of strategy.

She had 3,000 of the maps printed in an initial press run, and is deriving revenue for now just from map sales, since the maps don't contain any advertising and she doesn't charge the casinos for the listings. Customizing the maps for casinos, though, once she gets that part of the business rolling, will provide an additional source of revenue, she says.

Dar initially had some misgivings about pursuing a printing venture focused on a pastime that can contribute to some people's financial woes, if not enjoyed responsibly. She says she realized, though, that some people who shouldn't gamble are going to gamble anyway, and that she hopefully could do some good by including language in her map that encourages people to gamble responsibly and offers tips on money management at the casinos.

"I think that educational part is very important," she says.

Though Dar is quick to acknowledge the negative aspects of gambling, she notes that she grew up on a farm in Wapato, Wash., near Yakima, on the Yakama Indian Reservation, and says, "I'm both honored and proud when I see what the casinos have meant to the Northwest. They have allowed tribes to give back to their communities—funding education, health clinics, and more. The casinos have made a difference in our local economy."

Dar isn't Native American herself, but says her dark hair and complexion—a product of her Filipino and Irish-German heritage—make it easier for her to mingle and fit in with tribal members.

Her casino maps, along with being sold through her Web site, have been picked up by Unitime Imports Inc., a Spokane-based wholesale company that distributes products to convenience stores and other retailers, she says, and she is exploring other distribution channels as well.

"My interest in publishing is my interest in information. I was one of those kids who would spend hours reading the encyclopedia," she says, adding that she considers sharing information with others to be "like a gift."

Dar's interest in being a disseminator of information surfaced at an early age. She says she tried to publish a newspaper when she was in the sixth grade. It lasted just two issues, but showed that publishing "apparently was something I was meant to do," she says.

She worked on the Wapato High School newspaper, simultaneously pursued an interest in art, and majored in fine arts at Central Washington University, in Ellensburg. While attending college, she worked at an Ellensburg print shop, learning a lot about the printing business, she says.

Later, she worked in Olympia for the public policy-focused Washington Research Council for a couple of years, producing everything from newsletters to a 450-page book, and then became membership director of the Yakima Chamber of Commerce. She left that organization in 1986 to start Eagle Publishing, began producing her parenting guide that year, and moved to Spokane in 1992 when her then-husband was transferred here.

Despite transitioning from one publication to another, Dar says her company has remained financially solid. "Publishing has never made me wealthy," she says, "but it's allowed me a comfortable life, and the ability to put my kids through school and to do something I love."