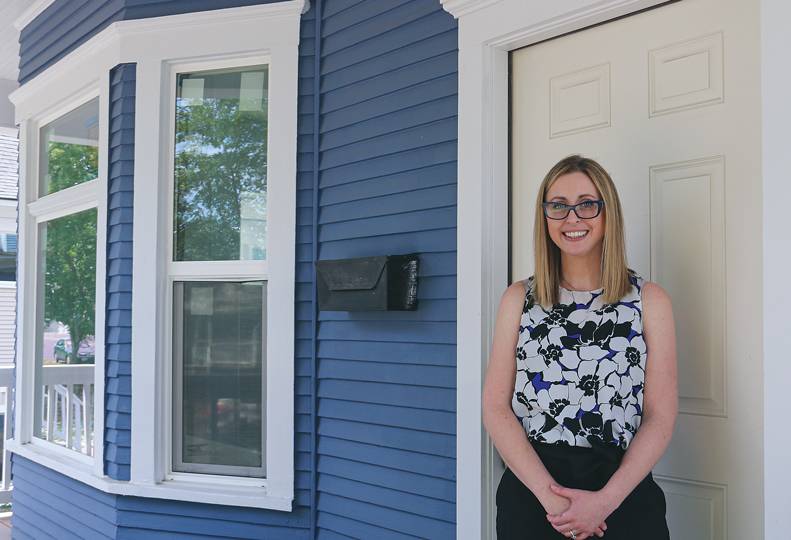 -Virginia Thomas
Habitat for Humanity-Spokane CEO Michelle Girardot says the organization recently completed a renovation of this house in the West Central neighborhood, into which a family will move soon.

Habitat for Humanity-Spokane has pivoted from constructing new homes to rehabilitating existing homes as availability of construction materials and labor tightens and costs rise.

Michelle Girardot, CEO of Habitat-Spokane, says though the organization historically has been involved in building new homes, rehabilitation projects have been essential to continuing to provide affordable housing as construction materials and labor costs skyrocket.

Through Habitat-Spokane, a family with several children will soon occupy a renovated Victorian home on west Sharp Avenue, in Spokane’s West Central neighborhood.

As she sits in the living room of the four-bedroom home along Sharp, Girardot recounts some of the work the structure needed.

“There were holes in the roof,” she says. “You had to use a ladder to climb up onto the porch.”

All of the repairs, in addition to the cost of purchasing the derelict house, were more affordable than a new construction project, Girardot says.

“Prior to this crazy bubble we’re in, building new was much cheaper to do than a rehab like this,” she says.

With a tight market for new housing, the organization turned to renovating existing homes through the Derelict Housing Acquisition and Homeownership Pilot Program.

“These rehabs, at least in the past 15 months of COVID, were how we were able to stay afloat,” Girardot says. “We’re able to serve more families. We’re able to reduce gentrification. We’re able to keep some of these beautiful old homes … within the current housing stock slated for affordable housing and homeownership.”

Girardot says most of the derelict homes Habitat-Spokane has rehabilitated are located in the West Central neighborhood, though it also has acquired and renovated some homes in the East Central and Hillyard neighborhoods.

Derelict homes -- also sometimes known as zombie homes -- are abandoned, typically run-down houses. Such homes can become a nuisance property, an eyesore that serves as a hub for criminal activity. The consequences, Girardot says, include lower property values and increased city expenses through a higher demand for code enforcement.

Solutions such as Habitat-Spokane’s derelict housing program create a positive situation for everyone involved, Girardot asserts. The neighborhood no longer has to deal with a derelict property, and a family in need finds permanent housing.

Girardot says that because building new homes has become more difficult due to costs, the market for existing homes--even derelict homes that need a great deal of work--has tightened in 2021. Sellers may be less inclined to consider Habitat for Humanity or another low-income housing organization, if they know they can make more money by selling to a private buyer, Girardot says.

“It’s been very difficult this year,” Girardot says. “We have acquired one unit, and we’re hoping to acquire another, both in West Central. But the tricky part now is, you can make a lot of money on many of these homes.”

“We often hear that we need infill. It’s difficult to do infill if it’s zoned for only one single-family home, and the cost of the lot in West Central, for example, could sell for over $100,000,” Girardot says. “We need to be able to build more densely so that the cost goes down, so that people can have a safe, decent, affordable place to live. If it’s a home they own, they also have the opportunity to build an asset.”

Until zoning laws change, however, the organization is continuing to hone its derelict home acquisition and renovation skills.

Girardot says that at the national level, Habitat for Humanity became more invested in rehabilitating existing homes after Hurricane Katrina devastated many neighborhoods in the Southeast.

Locally, Habitat-Spokane had been experimenting since 2012 with acquiring derelict homes directly from national banks. Now, however, it’s beginning to work with the city under its derelict housing pilot program.

Habitat for Humanity-Spokane bought the home on west Sharp Avenue for $40,000 from the city of Spokane. It’s one of a handful of Spokane homes the organization, which builds or renovates homes for people in need, bought from the city in 2019 with the intent to renovate and sell to low- or middle-income families.

The home on west Sharp Avenue and its neighbor to the east were initially saved by the West Central community, Girardot says. The structures had been slated for demolition by Sarff Investments LLC, of Spokane Valley, the company behind the Mega Wash, at 1111 N. Maple.

West Central community members struck a deal with Sarff Investments in which the company agreed not to demolish the homes if the community could find and pay someone else to move them.

“The community wanted to make sure that this piece of their history is preserved, while also serving more community members through affordable housing,” Girardot says.

Community leaders formed a nonprofit called Grove Community to save and relocate the homes. However, one of the early contractors tasked with moving and renovating the homes allegedly stole most of the $650,000 loan the nonprofit had received from a local church.

It took a year for Grove Community to find a new contractor. In that time, the properties became magnets for littering and squatting activity. In late 2018, Spokane Code Enforcement declared the buildings substandard and ordered that they be demolished within 90 days if Grove Community couldn’t come up with a new plan.

Eventually, the homes were placed into a receivership with the city of Spokane.

The city chose to offer the west Sharp Avenue homes in an auction open only to local nonprofit organizations, and on the condition that the homes be dedicated to affordable housing stock.

Girardot says Habitat-Spokane moved quickly to bid on the homes.

“The strings attached--committing to making sure that this is going to serve a low- to moderate-income family--that’s our bread and butter,” Girardot says.

Most of the local low-income housing organizations said they were financially unable to buy and renovate the homes, Girardot says. Habitat-Spokane, however, has access to larger federal and state programs, such as U.S. Housing and Urban Development Community Development Block Grant programs, and was able to acquire some homes.

Girardot says the pair of homes on Sharp have ground leases, meaning each homeowner can earn equity on their home without adding the cost of the land to their mortgage.

“Because there is a deed restriction on this land that it must be sold to another low-income buyer, whatever equity they do gain will be plenty for them to put a down payment on another home, while also ensuring that this next family will have the same opportunity,” she says.

Habitat-Spokane serves families earning below 80% of area median income. In 2019, that was about $71,700 for a family of four, meaning a family of four that makes $57,360 per year or less can qualify for a Habitat home after putting in 250 hours of “sweat equity.”

“In return, they pay no more than 30% of their monthly income toward their mortgage. That includes taxes, insurance, utilities, and interest,” Girardot says.

“They were ready: they had a safe place to shelter, they had space for their kids to study,” she says. “It’s affordable to maintain their unit, so they weren’t paying exorbitant utility costs.”

Girardot says she expected Habitat families would fall behind on mortgage payments last year. However, the rate of delinquency for Habitat-Spokane families has fallen to 1.6% from an average of about 5%.

“They were able to nest egg a little bit to get them through,” she says. “You just have so much more flexibility if you own your own home.”