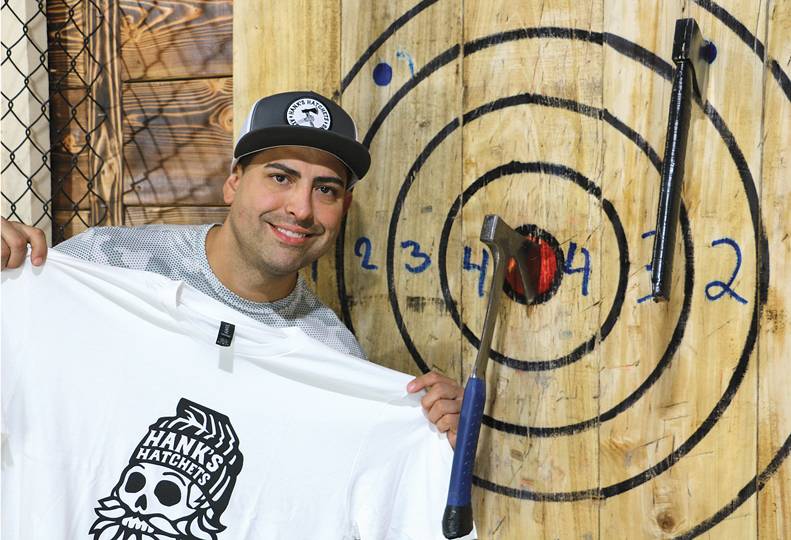 -Kevin Blocker
Mark McCullough has started Hank’s Hatchets Axe Throwing on Spokane’s North Side and plans to open another location in Coeur d’Alene either later this year or in early 2021.

Located in a roughly 3,000-square-foot building on the northeast corner of Division Street and Empire Avenue, Hank’s is located in the former home of the Puffin Glass Studios smoke shop.

Mark McCullough, who manages Hank’s here, says the company also plans to open an axe-throwing range in Coeur d’Alene either later this year or early next. The company has filed a permit with the city of Coeur d’Alene to put Hank’s at 2506 N. Fourth. Later in 2021, company owners have their sights set on opening a range in the Tri-Cities area, he says.

A full-time, independent construction contractor by trade, McCullough says he was looking for a second job which would allow him to have some fun.

“What I didn’t realize is how much of a stress reliever this sport really is,” he says. “I’ve started throwing myself because it’s therapeutic.”

Snacks and soft drinks are available for purchase, and outside food and non-alcoholic beverages are allowed inside. Families and children as young as eight years old are allowed to throw, and the venue also can host private parties, he says.

Hours of operation are Tuesday through Saturday from 5 p.m. to 10 p.m., and Sunday from 1 p.m. to 6 p.m. The space also can be reserved outside normal business hours for private parties, he says.

“As far as private parties go, so far, what we’ve seen is that this is a very popular thing to do for bachelorette parties,” he says.

Jumping Jackalope will take on a more formalized approach than Hank’s, as it will host team-building events and league nights. The goal, he says, is to get local axe-throwers competing across the state.

A coach and trainer as well, Tamburini says axe throwing is growing more rapidly among women than men.

“I think there’s an empowerment that women feel,” he says. “You can literally see some change right before your eyes. Some come in intimidated. In less than an hour, some are hooked.”