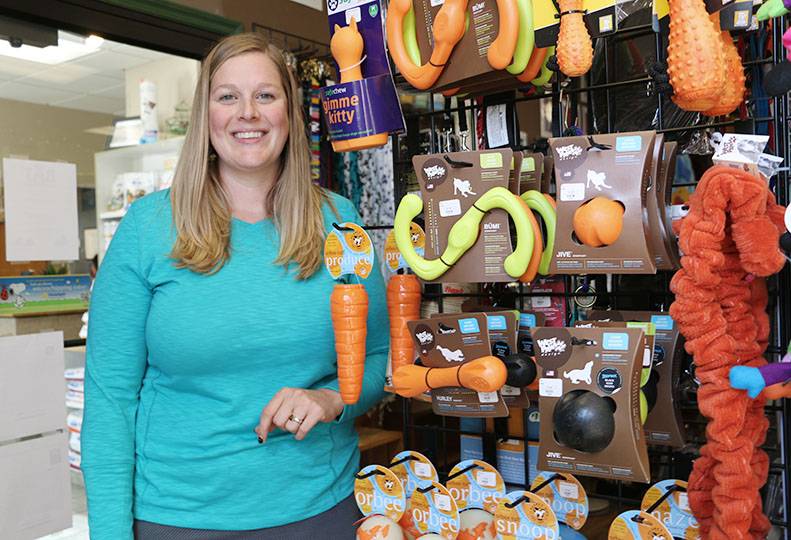 “Our house is a zoo right now,” she laughs.

“They’re wild little things,” Barker says. “They’ve added so much joy and really changed the dynamic of our house.”

Along with the kittens, the two have a 15-year-old tabby cat named Griffin, an almost eight-year-old Samoyed named Piper, and a 15-week-old Nova Scotia Duck Tolling Retriever named Declan.

“The kittens and Declan are growing up together, and they wrestle around; it’s so fun,” she says.

Prairie Dog also will soon be relocating. The store is planning to move to a 2,000-square-foot space in a new building at 5608 S. Regal around the end of October, Barker says.

Prairie Dog is moving because the South Care Animal Medical Center next door, which owns the space Prairie Dog currently occupies, is planning to expand.

Barker has one other full-time employee and five part-time workers, she says. Pringle also works as the managing librarian of the Hillyard branch of the Spokane Public Library. The two purchased Prairie Dog in November of 2013 from original owners Don and Cyndi Cutler, who opened the store in 2009.

“This was supposed to be Don and Cyndi’s retirement business, and it just became a bigger project than they wanted,” Barker says.

Barker, who has a background in professional photography, first started working at Prairie Dog in 2010, she says. Before that, she worked at another South Hill pet shop, The Urban Canine, for about eight months.

Barker says she tries to offer as many regional and U.S. products as she can at Prairie Dog.

“One of the things I try to focus on is local products,” she says. “One of the toy lines we move the most of is West Paw Design, out of Bozeman, Mont.”

Some of the toys in the store are made in China, Barker says, but she adds, “For our treats and food, nothing we sell was made in China.”

Barker maintains strict standards for the food and treats sold at Prairie Dog, she says. None of its products contain animal by-products, corn, wheat, or soy.

“What goes in can make a huge difference healthwise for an animal,” she says. “I wish we could do more organic, but it’s actually difficult. Our thing is natural and holistic.”

The store also sells prepared raw food, which contains raw ingredients such as organ meat, ground-up bones, fruits, and vegetables. Proponents of raw food claim it has certain health benefits, such as healthier teeth, coat, and skin, because it’s closer to what dogs ate before they were domesticated.

“Raw food is one of the things I really want people to know about,” she says.

All the employees at Prairie Dog do research on the latest in pet nutrition and training, Barker says.

Barker, who is certified as a professional dog trainer through the international Certification Council for Professional Dog Trainers, also teaches several classes at Spokane dog training school Diamonds in the Ruff, which was featured in the Journal on Aug. 14.

Barker became a certified trainer in 2012, she says. Her journey to becoming a trainer began in late 2003, when she adopted Loki, a troublesome five-month-old Husky-Malamute mix.

“He was dog-aggressive and people-aggressive,” she says. “He became the project of my life.”

In addition to having aggression issues, Loki didn’t learn proper boundaries as a young puppy or how to control himself when overexcited, Barker says. As a result, the 90-pound adult dog would often break Barker’s skin through her jeans or otherwise injure her while overstimulated. Barker and Pringle thought about returning Loki to the shelter, she says, but in the end decided to keep him.

Having a dog with behavioral issues can be very embarrassing and frustrating for the owner, Barker says.

“It’s like every time your dog does a behavior you don’t like, you’re almost re-grieving the loss of the dog you thought you had,” she says.

After taking Loki to classes at Diamonds in the Ruff, Barker was asked to start teaching.

“Carol Byrnes, co-owner of Diamonds, said to me, ‘You’re getting pretty good at this. Do you want to start teaching?’” Barker says. She then began pursuing her certification.

“We went the vet route and they gave us a prescription food,” she says. “It was like $80 a bag, and we were feeding him seven or eight cups a day, and he wasn’t gaining weight.”

Barker was working at The Urban Canine at the time, and says she asked owner Deborah Olmsted for advice.

“She pointed us towards some better food,” Barker says. “So we tried something different that actually had some protein in it.”

Vet-recommended foods are often low in protein, she says. Barker began doing research, and eventually began feeding Loki a raw diet, she says, which helped him put weight back on.

Sadly, Loki was euthanized at about seven years old, Barker says, due to his aggression issues.

“No one ever gets a dog with these things in mind,” she says. “It’s a very personal decision.”

However, Barker’s experiences with Loki have allowed her to connect with customers and offer them training advice, she says.

“It’s sad what happened, but because of it, I’ve been able to help a lot of clients with similar dog issues,” she says. “I have customers come in, and because I have this behavioral background, they ask me about things.”

At Prairie Dog, Barker and the store’s employees also focus on giving customers a personalized experience, she says.

“Instead of going to a big box store, people can get a more personalized experience here,” she says. “We really try to focus on knowing as much as possible about our products.”

Customers are always encouraged to bring their friendly dogs into the store with them, Barker says.

“We have lots of customers who come in and work with their dogs here,” she says. “It helps the dogs and it helps the community.”

“We do overlap a bit,” Barker laughs.

Barker also gets support from her family, she says. Along with her mother, who helps out in the store, her father helps keep the books for Prairie Dog, and husband Dan runs the website. Former Prairie Dog owners Don and Cyndi also helped Barker and Pringle make the transition to first-time business owners.

“I wouldn’t be able to do this without out the support of friends and family,” she says.

Looking toward the future and the store’s upcoming move, Barker says she’s researching new food brands to bring in, as well as considering teaching a puppy class for Diamonds in the new store after hours.

A big new PetSmart outlet is going in across the street in the Regal Plaza shopping center, but Barker says she is confident she can provide customers a different enough experience and product mix to compete well against that store.