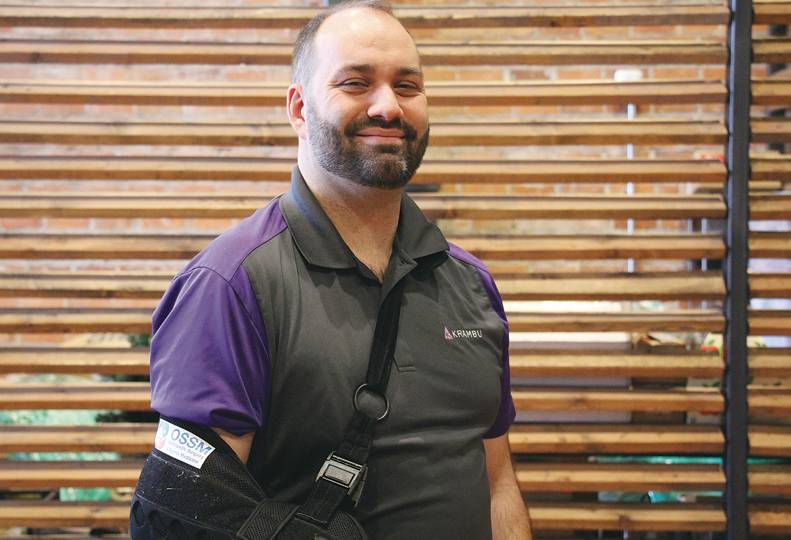 A 3-year-old startup based in Dalton Gardens has been making waves in the supercomputing industry, growing so rapidly in its short existence that it has expanded with a new location in northeast Washington.

Krambu Inc. survived the “crypto winter of” mid-2018 to 2019 — when the cryptocurrency industry experienced price corrections, investors panicked, and many companies similar to Krambu folded — by focusing on both blockchain and artificial intelligence technologies.

With most competitors out of the picture, Krambu made millions in sales over the course of a few months. Demand quickly outpaced the company’s production capacity. Krambu CEO and chief technology officer Travis Jank says that’s when the executive team decided to expand with a data center— a large group of networked servers — in Newport, Washington.

Krambu is headquartered at 7560 N. Government Way in Dalton Gardens, with a second office space in the Innovation Den, at 418 E. Lakeside, in Coeur d’Alene, and a data center in Newport, at 240 N. Union. The company has about 20 employees, Jank says.

Krambu offers proprietary hardware and software for blockchain computing and artificial intelligence, as well as hosting and colocation services, in which Krambu maintains servers owned by other companies.

Jank says Krambu’s products and services can be used in a variety of industries, and the company has been in talks with entities like JPMorgan Chase & Co. and the U.S. Navy.

Krambu Inc. was formed in 2017 with the goal of creating compact, efficient, powerful computers primarily for use as servers, or computers that provide data to other computers.

Krambu’s servers originally were designed for use in blockchain computing. Blockchains are secure distributed databases that preserve ordered lists of records; each block has its own timestamp and links to earlier blocks, which can’t be altered. In other words, a blockchain is a data structure that enables users to create a digital, shareable ledger of data.

But Jank says he and the other founders knew that blockchain computing was only one application for Krambu’s servers.

Servers capable of artificial intelligence are often far more expensive than others, Jank says, so Krambu decided to integrate such capabilities into its own server, for a more affordable price — about a tenth the price of competitors’ products.

That decision may have saved Krambu from the detrimental effects of the crypto winter. Jank estimates some 98-99% of cryptocurrency and blockchain-based companies dissolved over the course of about a year.

But because Krambu was no longer solely focused on blockchain technology, which is the network that cryptocurrency depends on, Jank says, the company was able to stay afloat — and even thrive — during the crypto winter.

“Once the weak companies and once the insolvent companies dissolved, it left a larger market share, a larger piece of the pie for the companies that remained,” Jank says. “The blockchain industry had a huge shortage of equipment. In late 2017, we did like $1.2 million in sales in about two months. For a company less than 6 months old, that didn’t even seem possible.”

The increase in demand catapulted the company to success almost overnight, Jank says.

“The second half of 2019 was amazing for us; every quarter, revenues kept going up and up,” Jank says.

“We didn’t expect orders to come in for at least a couple of years,” Jank says. “We sold out of our inventory. Finally, we just hit our limit. We couldn’t scale any more in the facility we had, we had multiple locations at that point. We ended up starting to look at a third location, and that’s where Newport came up.”

Krambu’s executive team decided to expand to Newport for a couple of main reasons, Jank says. Power in Newport is inexpensive, derived from a nearby hydroelectric facility. And Newport is fully outfitted with a fiber optic network, meaning internet speeds are fast and access is inexpensive.

Jank says the Newport facility is expected to be up and running soon, and the company intends to offer tours of the data center.

While the Newport data center was under construction, Krambu sought to file for several patents.

“Every hurdle that we had to overcome, we would look at as an opportunity for patenting intellectual property,” Jank says. “If we came up with a solution, the idea was that we should patent it, because we had to invent something to solve a problem.”

Krambu’s founders had “bootstrapped” the funding to launch the company, Jank says, but when they decided to file patents, the company had to seek outside funding, Jank says.

“We did a friends-and-family offering, and we raised pretty close to $1 million for the company,” Jank says. “That allowed us to (file) some patents, and we ordered more inventory.”

Jank claims any organization that needs a lot of computing power could find solutions in Krambu’s products.

“There are quite a few financial institutions that have reached out to us because they’ve been working on something in the blockchain space, which requires a large amount of computational power,” Jank says. “They want to do it cost-effectively, so they typically create their own blockchain solution to handle financial transactions in a digital ledger.”

Krambu has also been in talks with Texas-based software company HerdX.

“They recently got approval from the U.S. Department of Agriculture on using a blockchain system to monitor (agricultural) herd movements and activities,” Jank says. “They’re able to administer antibiotics and treatments directly to animals that need it, instead of whole-herd inoculations, so you don’t have overprescription of antibiotics.”

“If there’s a problem with meat, there’s a recall, but it takes a while for the USDA and Food and Drug Administration to get involved and figure out ... where it came from,” Jank says. “If you look at the method that HerdX is using, and the system that we have implemented, these enforcement agencies (would) have immediate transparent access to all of this data and would be able to pretty much instantly identify and stem outbreaks.”

Jank claims the company set a world record for the fastest recorded central processing unit speed by creating a tiny but powerful server.

“We took 19 compute units and put them into a 3U server, which is about 5-and-1/4 inches tall,” Jank says. “Then we were able to deliver 8.8 kilowatts of power — so you’ve got almost a dozen hair dryers’ worth of power in this small box. Then we had to perfect power delivery, because we’re delivering so much power in the server — we invented some new methods of power delivery, and we got a patent on that technology a few months ago.”

“We filter the air that comes in the data center, then we take that filtered air, pass it across the servers, and exhaust the heat out,” Jank says. “That means we do not have to spend money moving heat.”

Jank says Krambu’s servers also are cheaper than those of competitors. The company can build a data center for about $3.5 million, that would cost $30 million for a conventional data center.

Jank says he started building hardware for supercomputers in the late ‘90s, but quickly found that most software was unable to match the power of the hardware. Then he met Ben Meyer, now chief information officer of Krambu, who specializes in creating software for powerful computers.

“I remember meeting him and just thinking this is the missing piece,” Jank says.

Jank and Meyer teamed up with COO Lawrence Sowell, and the three officially formed Krambu.

“The idea was that we could develop hardware and software solutions in parallel,” Jank says. “We can make the software take advantage of the hardware, and we can keep pushing the hardware if the software is capable of higher performance.”