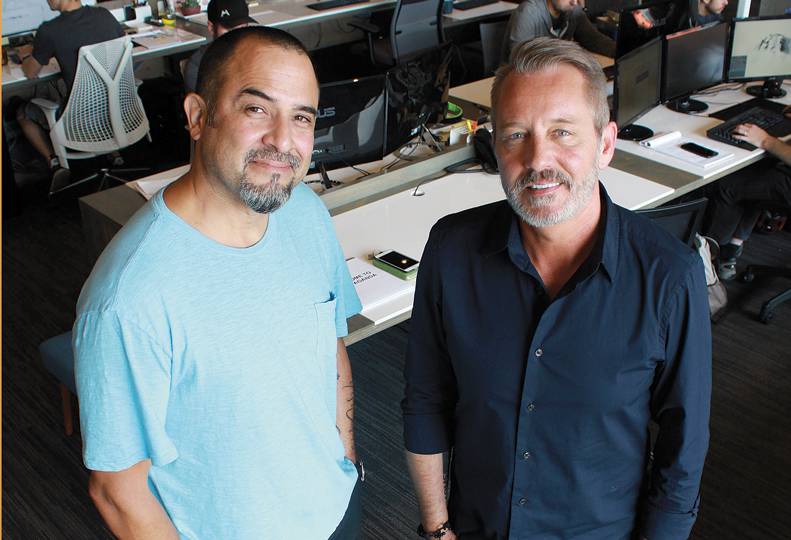 -Sandra Hosking
Hissong Design Group LLC founders Armando Hurtado, left, and Joshua Hissong started the firm in the depths of the Great Recession and have grown it since then.

Armando Hurtado and Joshua Hissong knew they were taking a risk when they started Hissong Design Group LLC in 2010, during the throes of a recession.

Being a startup in tough economic times taught them to operate leanly and motivated them to take on a variety of projects, they say.

“We started in the recession, and at that point, Josh had a lot of contacts in the restaurant industry, Josh being a restaurant owner. That became the catalyst for our designs,” Hurtado says. “That started to create some momentum in other avenues.”

Today, the company, which does business as HDG Architecture, designs restaurants, apartment buildings, financial institutions, offices, residences, and more. It gains its projects largely though referrals and repeat business.

“Now, fortunately, we’ve gotten to a point where we’re able to pick and choose what sorts of projects we do,” Hissong says. “They all have a layer of the type of architecture we enjoy doing.”

While Hurtado and Hissong decline to disclose revenues, they say HDG has nearly doubled its earnings each year since 2013.

In 2016, HDG purchased and renovated property at 230 S. Washington in downtown Spokane. HDG occupies about 3,900 square feet of the space, which it shares with Propaganda Creative LLC. Paradigm Skate, Right Mind Printing, and Twisted Raven Tattoo lease the additional space in the 6,800-square-foot building.

HDG has worked on about 70 projects so far this year, with about three dozen currently active. The business already has exceeded the number of proposals it did in 2018, Hissong says.

Spokane-area projects HDG has designed include Nudo Ramen House and Sweeto Burrito restaurants and the College Avenue Apartments. It also has worked on renovations for the Steam Plant, DCI Engineers Inc., and a Red Lion Hotel, in Wenatchee, Washington. It has designed a number of projects outside of Spokane, including in California, Pennsylvania, New York, and Hawaii.

The company recently landed a contract to redesign some interior space at the Northwest Museum of Arts & Culture, in Spokane. Details about that project have not yet been set, Hissong says. HDG also is working with the Kalispel Tribe of Indians to redevelop part of the Northern Quest Casino site in Airway Heights.

In addition, HDG is working on an expansion of the Unitarian Universalist Church, at 4340 W. Fort George Wright Drive in Spokane. The church was designed by Moritz Kundig and opened in 1961.

Kundig also designed Hissong’s residence, which was built in 1971 and which Hissong recently remodeled, keeping the original nature of the structure. The home and project are featured in the July-August issue of Dwell magazine. The article features interviews with Hissong and Kundig, who is now in his mid-90s.

Hissong and Hurtado describe their design as contemporary and uncluttered. Their buildings can be recognized by their modernist lines and blend of metals and warm wood grains.

“It’s going back to that incredible time where the lines weren’t skewed by 27 different materials as they were in the ’80s, ’90s, and 2000s,” Hissong says.

“We do have the unique ability, especially in the commercial environment, to take a client from notion to open, all the way through the process,” Hissong says.

HDG and Propaganda worked with Spokane Federal Credit Union, which has recently been renamed Canopy Credit Union, to create a new identity in order to reach a broader market.

“There’s a true connection between their branding and their identity. I think the opportunity to create their identity and physical space in tandem is kind of unique,” Hurtado says. “For us, the advantage being the branding company and the architectural company is we are sitting side by side, so we’re able to communicate on the fly about what each is doing.”

HDG designed the credit union’s new branch, which is under construction and expected to be open this fall. The building, located at 13015 E. Sprague, in Spokane Valley, is being built by Spokane-based Baker Construction & Development Inc. The site had previously been occupied by Cars Northwest.

The 4,500-square-foot building will feature a long bank of glass windows with a large white face above. Like much of HDG’s work, it boasts clean lines with a mid-century modern look.

Hurtado and Hissong attribute their success to the strength of their partnership. They are aligned on most of the larger issues, they say, and disagreements often are solved with the flip of a coin.

“Any partnership has disagreements, but we’ve always had the same mindset of where we want to be, who we want to be, and what we want to be – having the ability and the trust in each other to have that flip of a coin,” Hurtado says.

If they do disagree, usually it’s over something smaller, like whether they should use black or gray, he says.

They tend to divide the workload by playing to each other’s strengths. Hurtado typically handles the technical design and project management side, while Hissong focuses on marketing, company advancement, and maintaining client involvement, in addition to design.

Hurtado, who holds a bachelor’s degree from NewSchool of Architecture & Design, in San Diego, was drawn to the field by the artistry. “I love design, physical space, the artistry behind it. It’s one of the grandest forms of artistry that evokes all the motions, varied emotions and even the sixth sense.”

Hissong “fell” into architecture. When the Coeur d’Alene native bought a loft, the developer suggested he hire an architect to design it. Instead, Hissong bought software and taught himself. He later took classes and worked for a restaurant designer.

Both Hissong and Hurtado emphasize the importance of creating an ideal work environment for their employees. Their office features open workstations, several conference rooms, a loft with a row of couches, and a nap room. A bank of windows on the east side provides a generous portion of natural light. White accents add to the brightness.

Quotations appear in every room and act as reminders of their values: “If not now, when?” “Make it matter.” “Make many mistakes.” An outdoor courtyard features a large sign painted on one wall that reads, “Relax.”

Hurtado calls the sayings guides. “When you’re losing steam, and you’re starting to compromise, the ‘make it matter’ is that guardrail,” he says.