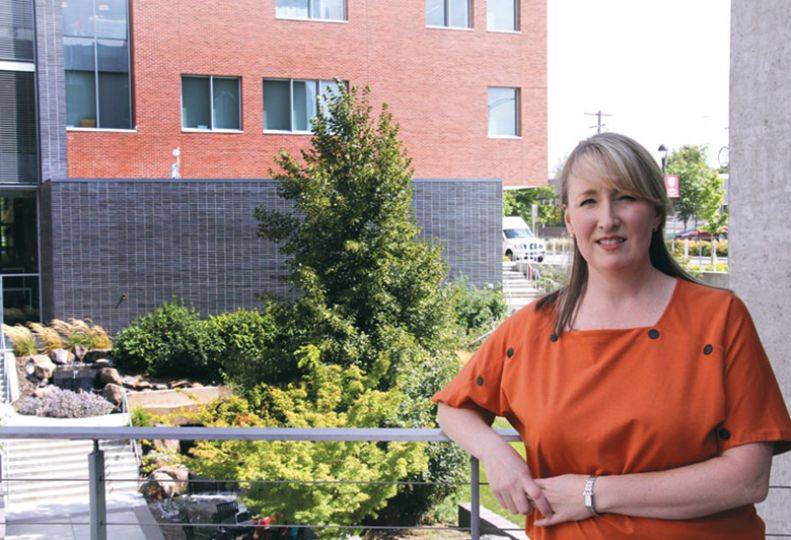 Anne Mason is the director of Washington State University’s doctor of nursing practice program and a clinical associate professor at the College of Nursing. She says the program has seen significant growth in the number of nurse practitioner applications during the last three years.

“There’s a slight discrepancy this year, as we lost some faculty at our Tri-Cities campus and weren’t able to accept as many students,” Mason says. “But last year, the program graduated 33 DNPs, the largest class since we started in 2012.”

Advanced practice nurses, also known as nurse practitioners, are registered nurses with additional education that enables them to perform some of the same duties as a physician. Those include taking patient histories, performing physical exams, ordering labs, analyzing lab results, prescribing medications, authorizing treatments and educating patients and families on continued care.

Mason says nurse practitioners usually specialize in one area but can also work in research or academia.

“Unlike a registered nurse, who implements the orders of an advanced practitioner, DNPs are able to diagnose patients and give care orders,” she says. “They have an expanded scope of practice.”

According to U.S. Bureau of Labor Statistics data, 2017 median pay for nurse practitioners was $110,930. Bureau data show the employment outlook is for a 31 percent growth in the number of nurse practitioner jobs between 2016 and 2026.

“Those numbers are consistent with what we see for family nurse practitioners,” says Mason. “Pay does vary by specialty, with psych mental health nurse practitioners having higher salaries due to greater demand. It’s not uncommon to hear those program graduates being offered between $115,000 and $135,000.”

Comparatively, bureau data on registered nurses show a 2017 median pay of $70,000, and an employment outlook of 15 percent growth in registered nursing jobs between 2016 and 2026.

Unlike physicians, pharmacists, and physical therapists, Mason says nursing is one of the last health care professions to develop a doctorate level degree.

“In the early 2000s, nurse practitioner education was redefined by the Association of Nursing Colleges, and it was decided to move from the master’s degree being the terminal degree, to a doctorate,” she says. “There are still master’s programs offered, but overall the doctorate is preferred.”

“The master’s level had an inflated number of credits in order to achieve, and it was missing key components like leadership and quality improvement initiatives,” she says. “The DNP really speaks to those aspects, and we see more and more employers seeking DNP prepared practitioners.”

To become a nurse practitioner, students must first become a registered nurse, which is typically accomplished by obtaining a bachelor’s degree.

After that, students need to study toward a master’s degree or a doctorate in nursing, a process that takes between two and three years of study followed by a certification and obtaining a state-specific license.

Mason says the main differences between a physician and a nurse practitioner are the amount of formal education required and the fact that physicians don’t need to stay in practice in order to maintain their license.

“Medical students are new to the clinical setting, whereas nurse practitioners have already worked as registered nurses treating patients, so they bring that background to the role,” she says.

Mason says all DNP students share initial core courses together, then split off into classes that focus on their specialty area.

Students come together again the last four semesters of their studies to work on their capstone courses and final projects that are designed to improve health care and patient outcomes.

Mason says Washington is one of 23 states that allow nurse practitioners to operate an independent practice in which they diagnose and treat illness, order and interpret diagnostic tests, and initiate and manage treatments. In other states, nurse practitioners make a collaborative agreement to work with a supervising physician.

“Part of the reason we allow nurse practitioners to have their own practices, is because here in Washington we continue to see significant demand for primary care,” she says.

“Many of our counties have been designated as health professional shortage areas by the U.S. Health Resources and Services Administration (HRSA) and the state Department of Health, and a lot of them include rural areas where residents have little access to health care.”

Mason says that in 2017, the WSU College of Nursing received a federal grant, called ANEW, for advanced nursing practice in rural Eastern Washington, to help train nurse practitioners and address the shortage of primary-care providers in Eastern Washington rural areas.

First, she says, the grant created a formal partnership between the WSU College of Nursing and the Community Health Association of Spokane that allows for one nurse practitioner to serve as faculty in residence at the college, bringing real-world clinical and organizational challenges to its curriculum.

Also, the grant has provided training, including tuition reimbursement and stipends, to 15 full-time nursing students each year, if they’ve agreed to be trained primarily in rural health clinics or clinics providing care to underserved populations.

“There continues to be a great need for primary care providers in rural and underserved areas,” says Purath. “It’s generally thought that nurse practitioners can help fill some of those shortages, so that is the focus of this particular grant.”

Although the WSU-ANEW grant expires in June of next year, Purath says WSU will continue to look for funding to support nurse practitioner students.

“Our mission as a college is to provide well educated nurses and nurse practitioners, increasing the workforce in the state,” she says. “So, we will continue to seek funding, and explore new education initiatives with our partners at EWAHEC.”

As the role of a nurse continues to expand to delivering patient-centered care that’s efficient and cost-effective, more students are gravitating toward obtaining an advanced nursing degree Mason says.

“I’ve heard just anecdotally from students, that they prefer the DNP degree, as being a registered nurse in an acute care setting can be very demanding emotionally and physically,” she says. “The nurse practitioner role allows for a greater focus on one patient at a time, making it easier to focus on individual care.”

Not only are students attracted to the career because it allows them greater freedom to use their skills and knowledge, but it’s also more lucrative.

“Advanced practice nurses get a pay increase due to their added education, and occasionally a productivity re-imbursement, so it’s definitively the more lucrative option,” Mason says.

Mason says one factor that continues to drive demand for primary care is the aging baby boomer generation.

“We have a lot of older people that will need care,” she says. “Additionally, we haven’t made much advancement in addressing chronic conditions like diabetes, so we’ll need health professionals who treat those conditions.”

Mason says she anticipates there also will be people getting sick at younger ages who will need medical providers who can help them to adjust and make healthier lifestyle choices.

“That’s kind of a nurse’s trademark niche,” she says. “Being able to understand the individual in front of them, not just their medical history, but how their culture and lifestyle is impacting their health.”

While there’s still a significant nurse and physician shortage, Mason says the shortage of academic faculty is even greater.

“Many of those who were teaching nursing courses have or will soon be retiring,” she says. “Another aspect is that academic salaries aren’t commiserate with those offered for clinical positions.”

“It’s challenging to find clinics that allow for student shadowing, as many are focused on productivity goals and maintaining their overhead,” she says.

Mason herself attended WSU’s master’s program, graduating in 2005. She later completed a post DNP degree from the University of Colorado.

In addition to her teaching role, Mason also continues to practice, serving as a nurse practitioner at Family Essentials Counseling Center, in Spokane Valley.

“I always wanted to marry the academic, research, and scholarship aspects of being a nurse practitioner,” she says. “I really value my ability to bring fresh clinical experience to the classroom to help educate future nurse practitioners.”