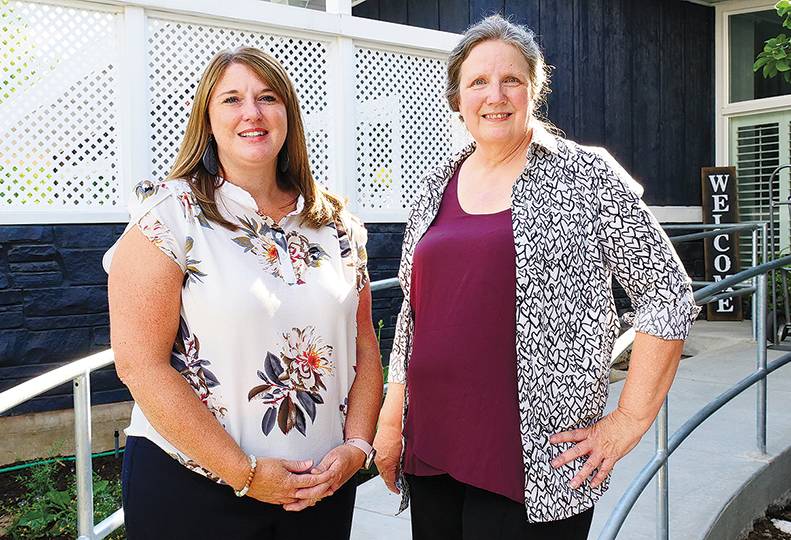 -—Virginia Thomas
Tara Newman, left, and Beth Ann Johnson say the Spokane facility is treating up to six patients currently but will have the capacity to house 12 eventually.

A new care facility for medically fragile children and teenagers will begin caring for patients this month on Spokane’s South Hill.

The Spokane facility, called Ashley House NW, initially will accept up to six children, says Tara Newman, clinical program administrator for the facility. Eventually, the facility will care for a total of 12 children.

Newman says most children at Ashley House have congenital disorders such as bronchopulmonary dysplasia, short gut syndrome, seizure disorders, or spina bifida. Some children come to Ashley House after an organ transplant or following hospitalization after a car accident or other traumatic injury.

Ashley House NW provides transitional, long-term, respite, and end-of-life care services. Newman says most children are at Ashley House for a short time, sometimes a few weeks. During that time, health care providers at the facility teach family members how to care for the child.

“The ultimate goal of Ashley House is to get kids back home with their family,” Newman says.

Even families that can afford private nursing in their home for their medically fragile child may be forced to provide care themselves due to a shortage of traveling nurses, Newman says.

Beth Ann Johnson, director of donor relations and grants, says Ashley House provides many of the same services children would receive in the hospital, but at a lower cost. Services typically are covered by private insurance and Medicaid.

“A hospital stay today for a medically fragile child can be anywhere from $5,000 to $25,000 a day, depending on their needs. Our costs, for the same child, run roughly $1,500 to $2,000 a day,” Johnson claims. “This actually is a money saver for insurance and Medicaid, because we don’t have all the overhead costs that a hospital does.”

Johnson says the 501(c)3 charitable organization had been eyeing Spokane for a potential Ashley House location for several years. When a similar organization in Spokane called Weeping Ridge closed in mid-2019 after the Washington state Department of Children, Youth, and Families suspended the organization’s license, Ashley House hastened its plans, Johnson says.

“The families of the residents had about 48 hours to find new accommodations for their children,” Johnson says. “Some took them home. One child ended up at Seattle Children’s. Several ended up in the Tri-Cities and in Yakima. Those were the closest alternatives.”

In May 2020, the Ashley House organization found and purchased a 4.200-square-foot former single-family home located at 4118 S. Cook, a few blocks west of the Ferris High School campus and four miles from the Providence Sacred Heart Children’s Hospital.

“We like to be within reasonable travel distance to the hospital,” Johnson says.

Renovations on the structure began in June 2021. Johnson says renovations cost about $500,000. Some costs were alleviated by time and equipment donated by some of the businesses Ashley House worked with to renovate the home, as well as a grant from the Washington state Department of Commerce.

Much of the remodeling brought the building up to state code for a health care facility, Johnson says.

“There have to be sprinkler systems and ramps and fire exits,” she says. “We had to widen hallways. There used to be a fireplace in the living room; there’s no fireplace anymore because we don’t use fireplaces in houses where we use oxygen tanks.”

Two bathrooms were combined to create a larger bathroom with enough space for a wheelchair, as well as a bath chair lift to get children into the bathtub.

The Ashley House organization was formed in 1989 by a group of people who saw a need for a health care setting for children that could help them transition from hospital to home.

“Kids who needed extended care beyond the hospital often were stuck in a hospital for a lot longer than they needed to be, or occasionally they were sent to a nursing home,” Johnson says. “Sometimes they were sent out of state, because there was no provider to bridge from the hospital to home.”

Johnson says that more than 900 children have lived at an Ashley House since the organization began.

Ashley House also has pediatric facilities in the Western Washington cities of Auburn, Tacoma, Kent, Shoreline, and Olympia. A facility for adults ages 18 to 30 is located in Edgewood, Washington, near Tacoma.