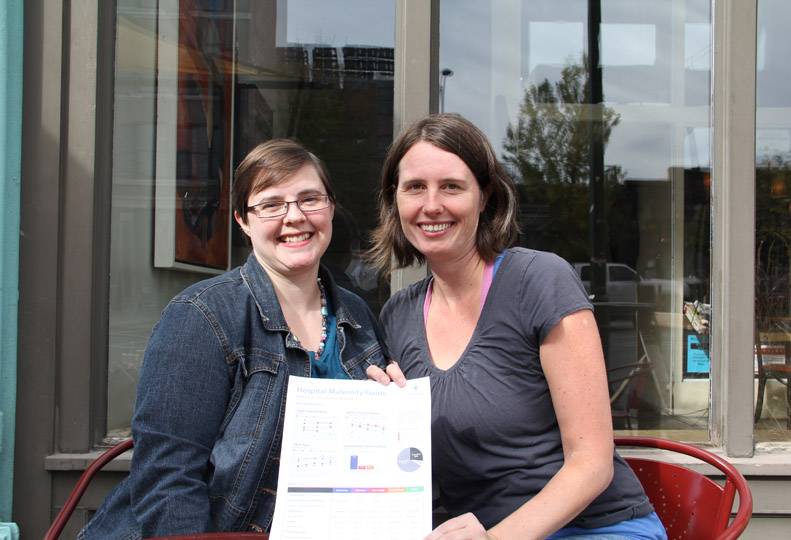 Weaver, who is also a doula and family educator with Spokane Birth Support, says the purpose of the maternity guide is to give as much information as possible to prospective parents.

“Basically, we wanted to create a resource where parents could look at all of their options side by side for in-hospital birth options, locally,” she says. “Different things are important to different people.”

The two also wanted to make it as easy as possible for prospective parents to get the information, Weaver says.

“If it’s cumbersome for them to get that information, you’re already closing down their options,” she says.

Reese says it took some time to compile the data and create the guide.

“It took about a year from when I first thought of it in the shower,” she says. “I just saw it all of a sudden in my head.”

One of the reasons it took so long is that the two saw another maternity guide, for the Portland, Ore., area, and wanted to include some of the information that it contained, Reese says.

“We saw it on a blog. They had created an online one for 12 hospitals,” she says. “It had a few pieces of information we didn’t have on ours.”

Reese, who also owns an online marketing consulting business called Sixth Man Marketing LLC with her husband Edward, says Bloom Spokane provides information and resources focused on pregnancy, childbirth, and postpartum topics. The organization, which was founded in 2009, is locally focused, she says, and currently is run by a staff of five volunteer moms.

“We try to make it really relevant for the Spokane and Coeur d’Alene region,” she says.

BirthNetwork National is a nonprofit organization that was founded in 1999 in Birmingham, Mich.  The network offers support and information to people seeking resources or information about maternity care. The organization focuses on promoting mother-friendly maternity care, which aims to empower women to make informed decisions about their pregnancy and birth experiences.

The free guide that Bloom Spokane created can be taken on hospital tours, Reese says, as a way to open dialogue between expecting parents and providers.

“It prompts conversations,” she says.

Weaver says the guide contains the five hospitals’ policies on several aspects of the birthing process, including C-sections and options for low-risk and high-risk deliveries.

“It’s really important for patients to know what’s hospital policy and what’s not,” she says.

The organization also recently launched an online presentation version of its Birth Options class. The presentation details the childbirth options in the Spokane area.

“We said, ‘Let’s create just sort of a broad-brush info class on birth options,’” Reese says. “The parents can then walk away with a game plan.”

As with the maternity guide, Weaver says, the presentation is designed to help prospective mothers and fathers make decisions about what kind of birth experience they want.

“Really, what it comes down to is feeling like nothing was done to you,” she says. “Having that autonomy is very important.”

“We realized we weren’t reaching enough of the community with the physical class,” she says. “We really felt like it was important to have the content of this class available online.”

Reese says the organization will offer the physical class a few times a year.

Weaver says she hopes that childbirth educators, doulas, and midwives in other areas will use the online presentation to teach in their own communities.

“They could show the online video, and pause it and answer questions,” she says.

Along with the Birth Options class, Reese says part of the reason she and the others at Bloom decided to create the guide was because they didn’t know all the available options when they were having children.

“Almost everything we do at Bloom is because one of the five of us was like, “I wish I would’ve known this,” Reese says.

The guide also has a section of definitions and evidence for maternity care practices, Weaver says. Two of the terms in the guide are evidence-based care and patient-centered care. Practitioners who use evidence-based care use the latest available research, as well as the mother’s wishes, to help guide maternity decisions. Patient-centered care encourages the participation of the patient and family in making decisions.

“People who are having babies for the first time don’t always understand that they have options,” Weaver says. “They think they need to get an obstetrician, go to the hospital, and do what they say. We want to have care providers who are knowledgeable and listen to the patient, but it all comes down to evidence-based care and patient-centered care.”

Reese says that some hospitals here began looking into expanding their birthing options as Bloom began to gather data for the guide.

“The coolest part about this was, when we first sent out questionnaires to the hospitals, they didn’t know what it would look like,” she says. “Once we sent them draft copies, the gears started turning and they started changing some of their options.”

“We showed them where they could order hospital-grade birthing stools,” Reese says. “We’re really proud of our local hospitals. They have some stuff to work on towards evidence-based care and patient-centered care, but we have so many legal, well-supported birth options here … our C-section rates are really low (also).”

C-sections come with certain risks to both the mother and infant, Reese says, and also put women at a higher risk for developing complications during later births.

“Even though they’re relatively safe, there are still inherent risks with any surgery,” she says.

Reese says that C-sections have been increasing nationwide since the 1990s, and it’s currently estimated that about a third of all births are C-sections.

Weaver says that Bloom is hoping to raise awareness about one statistic reported in the guide in particular, the rates of vaginal births after C-section (VBACs). Traditionally, once a woman has had a C-section, any subsequent births are C-sections as well.

“The practice of ‘once a C-section, always a C-section’ creates more dire circumstances for later pregnancies,” Weaver says. “The concern is with the scar and how it would tolerate labor. If the woman has another C-section, they’re going through the same scar, and building more scar tissue … now, according to evidence, it’s safer to VBAC.”

Reese says that, moving forward, the organization plans to update all the information in the guide once a year, unless a hospital has a major shift in policy.

“If big changes happen, we have the ability to change it,” she says.

Weaver says she expects the number of midwives available to attend births at the hospitals to rise.

“Holy Family will be getting more midwives,” she says. “Sacred Heart had two (when the guide was made) and I know they’re hiring a third.”

In the future, the guide also could include information about newborn procedures, options such as using nitrous oxide during labor, and perhaps a separate guide for out-of-hospital births.

“Everything involved in a home birth, versus a hospital birth, is very different,” Reese says.

Weaver and Reese say that next year’s guide might not include the total C-section numbers for each hospital. Reese says the Washington state Department of Health will no longer be collecting that data.

Weaver says that overall C-section rates aren’t a good indicator of a hospital’s procedures, because that number includes high-risk deliveries as well as low-risk deliveries.

For a better indication of how many potentially unnecessary C-sections a hospital is doing, a person should look at the rates for what’s known as an NTSV C-section. An NTSV birth means a nulliparous, or first-time, mother giving birth to a full-term, single baby in the vertex, or head-down, position.

“Hospitals with NICUs (neonatal intensive care units) will probably always have higher total C-section rates because they serve a high-risk population,” Weaver says. “But they shouldn’t have high NTSV rates.”

While Bloom Spokane has had relationships with local medical providers, who often are professional members of the organization, it hadn’t developed strong relationships with the area’s hospitals before creating the guide, Reese says.

“We’ve developed some good relationships with the hospitals,” she says. “We wanted all the information to be approved by them. We also wanted it to be a vehicle for the hospital to be like, ‘Here’s what to expect.’”

Bloom Spokane already offers a printed provider directory, which is also available on its website, Weaver says. The directory has information about all the roughly 100 Bloom Spokane and BirthNetwork National professional members in the Spokane area.