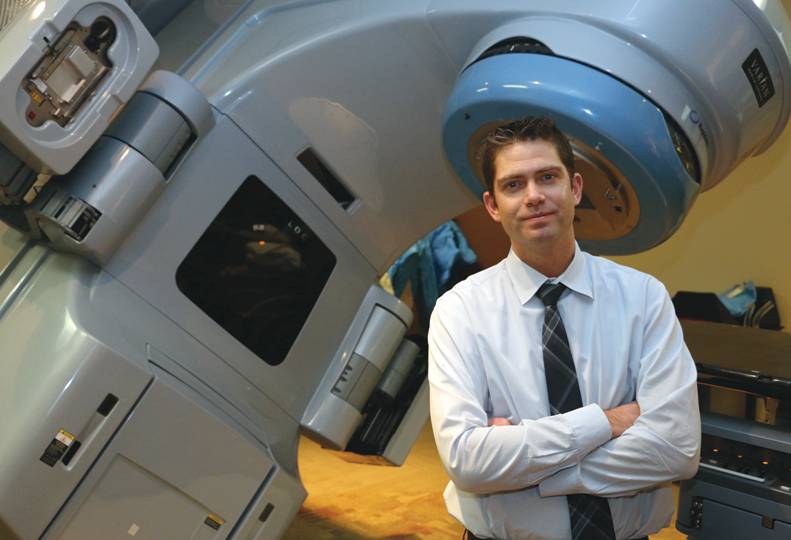 The Alliance for Cancer Care is in the final stages of a two-year push to upgrade its stereotactic ablative radiotherapy equipment, which provides a more targeted method of administering doses of radiation.

The equipment employs technology that, according to alliance medical director Dr. Aaron Wagner, is more efficient and is improving patient survival rate.

“(SABR) is a very focal, highly precise treatment aimed at basically killing whatever you hit,” Wagner, who is also the medical director for radiation oncology for Cancer Care Northwest, says. “Think of it as doing surgery without actually doing surgery.”

Whereas regular radiation therapy would take between five to seven weeks, SABR can be completed in three to five treatments, with control cases seeing a 90% to 95% effectiveness rate, Wagner says.

The alliance has purchased seven machines, he adds, that are spread between five clinics. It expects to acquire one more at the start of next year.

He notes that effectiveness is dependent on the type of cancer, with sarcomas typically showing more resistance to treatment over other tumors.

The SABR technique has been around for nearly 15 years, he says, but technological advances have made the treatment both safer and faster, Wagner says.

Typically, a treatment can be delivered in less than five minutes, versus the original 30, which is beneficial to patient comfort and increases the accuracy of the treatment, he says.

“It turns out these tumors can move with time,” Wagner says. “Your body’s obviously not entirely static.”

The imaging capabilities of the Elekta Linear Accelerators, the newest tech in SABR treatments, allow the physicians to take “four-dimensional” CT scans that incorporate time, Wagner says, so doctors can track a patient’s breathing pattern and movements for pinpoint accuracy when treating tumors.

These scans now can be done in real time just before a patient receives the treatment, a benefit when breathing patterns can change from day to day and week to week, he adds.

“The ability to do that is new in the world within the last two years,” Wagner says.

The Elekta also comes with hexapod couches, he adds, which are the platforms patients lay on when receiving treatments. The tables can be adjusted six ways to ensure body-position accuracy, he says.

“It’s changed how we end up treating cancer these days,” Wagner says. “Those capabilities didn’t used to exist, and now there’s whole new realms of cancer treatments that weren’t available to us before.”

He adds, “Not only is it a cool new toy and a new technology that lets us do good treatments, it’s also having a big impact on the way we treat patients, their survival rates, and the type of cancers that we treat that before we would say, ‘We don’t have any more options.’ Now, sometimes, we do.”

Such options include new treatments for metastatic cancers and oligometastatic disease in cases in which chemotherapy might not be enough to get rid of the cancer cells, or when surgery isn’t a viable option.

The SABR machines also are matched, Wagner says, meaning a patient can start treatments at the North Spokane clinic, get admitted to an alliance hospital, and receive the same treatments.

Wagner claims the alliance is one of the earliest adopters of this technology in the Spokane region.

Wagner contends that without the pooled resources between the alliance members, upgrading the machines wouldn’t have been possible.

“We wanted to pool the resources of two of the three major hospitals, as well as Cancer Care, to try to unify that for patients,” he says. “Anytime you can pool the physics resources, physician resources, research resources, that allows for better patient care.”

Wagner says the SABR treatment with precision technology is already growing around the world, and he anticipates continued growth globally and in the ways the treatment can be used.

Elekta Instrument AB, the company behind the Elekta Linear Accelerator, is a Stockholm-based company founded nearly 50 years ago that provides technology and solutions for cancer care. It has nearly 4,000 employees worldwide, according to the company’s website.