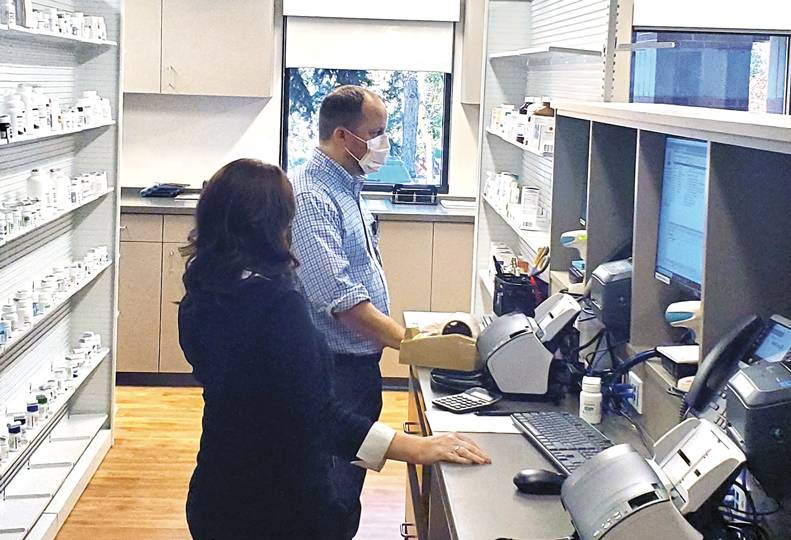 MultiCare Health System has added its own pharmacy at its clinic east of downtown Spokane in a move that it says will streamline medication services for patients.

MultiCare has in-house pharmacies at eight of its clinics in Washington, seven of which are located on the west side of the state. The health system previously contracted with Walgreens for standard pharmacy services at its Rockwood location.

Tim Lynch, Tacoma-based system vice president of clinical support services and chief pharmacy officer for MultiCare, says the health care network has been working to bring the pharmacy to its downtown Spokane location for about a year.

The in-house pharmacy will allow for more streamlining of the prescription process, as well as acting as a resource for health care professionals to coordinate patient care, he says.

“One of the goals of putting a pharmacist in that location is becoming a partner with the providers in that location, making sure that they have a drug expert on staff who can help them,” Lynch says.

A pharmacist can walk to one of the clinics in the building with questions about a patient’s medications, he says.

“Care of patients is a team sport in today’s world,” Lynch says. “It takes people with expertise in a lot of different areas.”

Kevin Maloney, MultiCare’s Inland Northwest media relations manager, says the Meds to Beds program hours are the same as that of the pharmacy.

“We’re working with care delivery teams to make sure we understand what medications a patient is going to be discharged on, and then delivering to those facilities so that the patients don’t have to make another stop after the hospital to get medications,” Lynch says.

Meds to Beds helps patients to understand their prescriptions more clearly, Lynch asserts. After medications prescribed upon hospital discharge are filled and delivered, the patient receives bedside counseling on the medications.

“We dispense those to the patient, provide education and training on how to use the medications, and then they’re able to leave with their medications in hand, along with all of the other information that they have at discharge,” he says.

The downtown Rockwood pharmacy also offers same-day prescription delivery for a $10 service fee, regardless of the number of prescriptions a patient receives in a single delivery.

Rockwood has partnered with Irvine, California-based Phox Health Inc. to provide medication delivery services to patients. Deliveries can be made to patients located within 40 miles of the Rockwood pharmacy.

Lynch says some patients don’t feel well enough to pick up prescriptions after a doctor visit, while others simply appreciate the convenience.

“If you’ve got young kids and you want to get home and not sit in the car or wait around for something, you can go home and we can deliver it right to your house,” he says.

Maloney says prescription medications at the Rockwood pharmacy are competitive with other pharmacies, meaning patients can expect to pay roughly the same for their prescriptions as they would elsewhere.

Lynch says a pharmacist currently is the sole employee at the Rockwood pharmacy. MultiCare is working to hire a pharmacy technician to assist the pharmacist and to work in the Meds to Beds program.

All specialty medications are delivered to patients at their homes.

Specialty medications include those that require special handling, administering, or monitoring. They also include high-cost medications and self-administered injectables, such as insulin for diabetics.

“There are medications that are very critical in terms of how they’re used, and they’re often very expensive medications, so it’s really important that patients know how to use them and how to get the most out of those,” Lynch says.