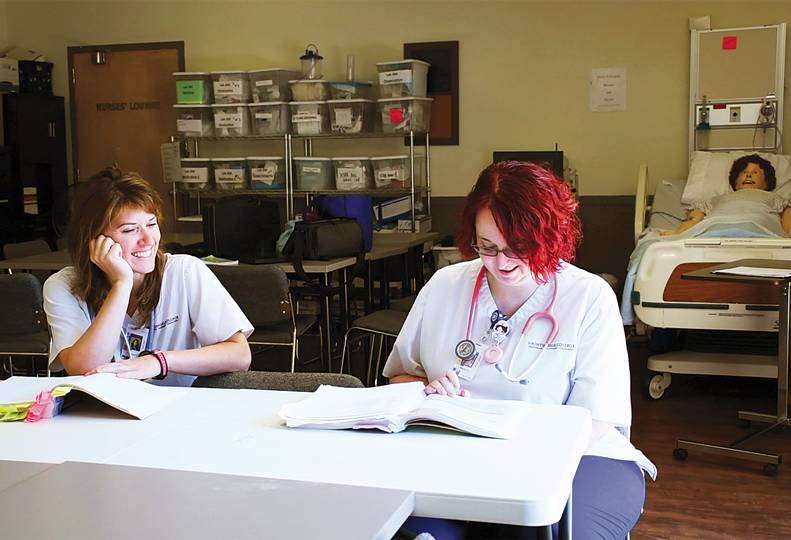 The college is a hybrid-learning nursing program, says Jonathan Tanner, senior vice president and chief partnerships and business development officer for the college. Its Coeur d’Alene health care partners will act as the regional hub for the school, says Tanner.

“Coeur d’Alene will be a very important geographical hub for Nightingale, not only for that section of Idaho, but for many learners that have been requesting access to our program for many years,” he contends.

The program started in the Coeur d’Alene area last August and has 20 students.

Coeur d’Alene is an area the college had long eyed for one of its programs, he says, adding that Nightingale had received requests from several health care providers in the area that expressed interest in partnering with the college.

“We’ve looked at Coeur d’Alene for many years as we’ve expanded our offerings in Idaho,” says Tanner. “We were receiving quite a lot of requests from in and around the Coeur d’Alene area and even into Washington and Spokane, hoping we would increase access to that part of Idaho.”

Idaho was the first state beyond Utah to which the school expanded its program, having partnered with health care providers in Pocatello and then Twin Falls, adds Tanner.

The program uses both on-the-ground and online learning components, in which students will take classes online before working with Nightingale’s Coeur d’Alene-based health care providers to provide clinical rotation hours, where students will shadow working nurses and get hands-on experience, he says.

In addition to the health care partners, the college also has hired a local faculty member to assist students.

The 12-month practical nurse program costs around $20,000 a year, or about $455 per semester credit, while the Bachelor of Science in nursing is about $594 per semester credit, he says, totaling just over $79,000 for the 32-month program. That program takes a little under three years to complete.

The school recruits geographically, with the goal of finding students who want to remain in the area in which they’re trained after graduating, Tanner asserts.

“It’s always been at the center of our mission that we try to educate locally so they stay and work locally for the partners that help participate in the education process,” he says.

He adds, “Nursing shortages are felt throughout the country, but they’re not felt the same in specific geographies. If you look at Boise, since we’ve been there, there’s quite a few nurses who are being produced for the Boise environment.”

Most nursing programs are based in urban settings, and students who leave a rural area to train in an urban school tend not to return to work in that rural area, contends Tanner.

“Many were not going back. That was a great concern of ours because that was the region that needed the nursing supply,” says Tanner. “What we’ve found is if we could educate them locally, then more importantly they would stay local and serve those local communities and elevate those communities.”

According to the National Nursing Workforce Study, more than 1 million nurses are expected to retire by 2030, as over 50% are age 50 and older.

“Nightingale College from the beginning has been about access … to underserved communities,” Tanner claims. “It is not only a learner-center nursing program in college, but it’s also an employer-centered nursing college that has very close relationships with the health care partners in those regions.”

Prior to COVID-19, the college established full simulation labs in partnering health care facilities for students to train at, but the pandemic forced the school to pivot to a virtual simulation lab, says Tanner.

Since making the shift to a virtual simulation model, the students’ skills and critical thinking outcomes have improved, as students now have the ability to practice certain skills as often as they wish, Tanner claims.

Previously, students engaged in an in-person simulation lab located at a partner health care facility, where they would get to practice a specific simulation only once or twice, he contends. With the virtual simulation lab, the school sends each student an at-home kit to use to practice each simulation, he adds.

With the move to virtual learning, the school also can now widen its geographic recruitment area in Northern Idaho and into Washington, because students won’t have to travel to participate in simulation training Tanner says.

Starting next year, the college plans to roll out a step program that will allow students to start at a practical nurse level and work toward a bachelor’s in nursing degree. The program will enable nurses to work while advancing their skills and earning a degree, Tanner says.

“We’ve introduced this step program to help those areas that do need to build their workforce now,” he says.

Nightingale has over 300 health care partners across the county, with over 1,600 students currently enrolled.