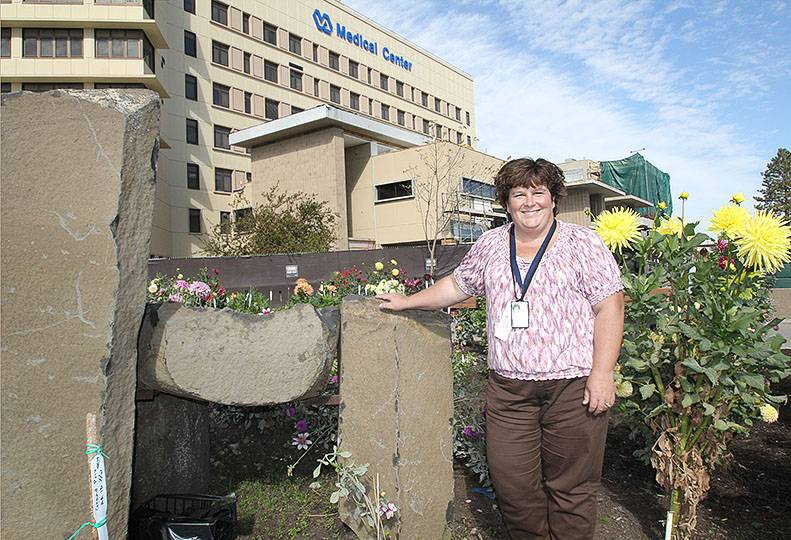 In 2008, when Cindy Jayne, 52, retired after serving 22 years in the U.S. Naval Reserve, she was angry, depressed, drinking heavily, and had threatened suicide more than once. She wasn’t technically homeless, she says, but she spent the better part of a year couch surfing—staying with friends and bouncing from couch to couch.

Then, the veteran who had been deployed to Kuwait twice—once for nine months and the second time for a year—spent a night in jail after beating up her boyfriend. That, she says, was when she hit rock bottom.

Jayne, who now lives in Coulee Dam, Wash., is one of Washington state’s 68,000-plus women veterans and one of 2.3 million women veterans in the U.S. who have transitioned from military service to civilian life with health problems such as post-traumatic stress disorder, military sexual trauma, and depression. Other issues such as unemployment, homelessness, and problems with reintegration, particularly if they have been deployed overseas, are also common for female vets.

The Mann-Grandstaff Veterans Affairs Medical Center, located at 4815 N. Assembly in northwest Spokane, is part of a military-designate area called a catchment area, that covers 64,000 square miles and 17 counties in Eastern Washington, North Idaho and western Montana. Along with the main medical center, the Mann-Grandstaff catchment area is served by two outpatient clinics in Coeur d’Alene and Wenatchee, as well as five rural clinics.

Bret Bowers, public affairs officer at the medical center, estimates that Veterans Affairs health facilities serve about 100,000 veterans, both men and women, in the three-state region. About 10,000 of those are female veterans, he says, and of those, area clinics serve about 1,850 women veterans—1,100 of those in the Spokane area. VA health facilities serve all branches of the military including the U.S. Marines, U.S. Navy, U.S. Army, the U.S. Coast Guard, the U.S. Air Force, and the reserves.

The Mann-Grandstaff VA Medical Center employs about 900 people at all of its facilities, and about 500 of those are employed at the 37-acre complex in Spokane, Bowers says. About half of those 500 employees are themselves veterans.

Liss says the three top health care issues women veterans in the Spokane area face include hypertension, depression, and PTSD. “And that’s consistent across the U. S.,” she adds.

Jayne says she knew she needed help but didn’t make a call until someone asked her if she had been to the VA hospital in Spokane. That help began with an intake interview and eligibility review. Jayne was set up with psychiatric care through the hospital, a primary care physician, and was assisted in filing a disability claim, she says.

During Jayne’s second deployment to Kuwait, she says she was sexually harassed for months, isolated, humiliated to the point where she ultimately became physically ill, and was removed from her position by a training officer. Complaints to higher-ups about the sexual harassment went unheeded, she says.

“I didn’t know I had PTSD,” she says. “I knew there were issues … I wasn’t sleeping, I was hypervigilant, and I was having panic attacks.” She told her therapist that because she hadn’t been raped and she had all her body parts, she didn’t want to take anything away from other veterans who needed help.

Liss concedes that the whole VA system can be a bit overwhelming. Part of her job is to serve as kind of a tour guide for women veterans navigating that system, she says.

She says military sexual trauma is a common reason for women to seek treatment at the VA Hospital.

She recalls meeting a woman recently at a rural outreach event hosted by the hospital who needed an identification card. Liss says that during the course of their conversation, the woman, who was in her 60s, confided that she had been raped while she was in the military and had never told anyone about it.

“She had a child as a result of the rape, and had never told the child they were a result of rape. She had never shared it with her spouse,” Liss says. “She decided it was time to deal with it.”’

Liss confides, with tears in her eyes, that the stories are difficult to hear.

A change in policy requires her to ask women if they have ever been sexually traumatized.

“The question is asked at least once when they enter care,” she says, because if they aren’t asked the question, they typically don’t volunteer the information.

She says many times, women won’t confide in her until trust has developed. Then women will come back and disclose that they have been traumatized.

“There is no wrong door for people to come in to see us,” she says, adding that a number of programs exist to reach out to women, especially in rural areas. But she says the VA can only help those veterans who seek help. “We don’t know they’re out there unless they come to us.”

“Often, these women are young and pregnant for the first time and seeking out maternity care,” she says. “Other women come in because they’ve found a lump in their breast.”

The 5.3 million male veterans who used the VA system in fiscal year 2013 far outnumbered female patients, says the Veterans Administration website, but the number of women receiving care through the VA has more than doubled since 2000. The tens of thousands of predominantly young, female veterans returning home has dramatically changed the VA’s patient load, and the system has yet to fully catch up, a 2013 VA report says. Also, as the total veteran population continues to decrease, the female veteran population has been increasing year after year, according to the report.

All enrolled veterans can use what the VA describes as its “comprehensive medical benefits package,” though certain benefits may vary by individual and ailment, just like for medical care outside the VA system. The VA typically covers all female-specific medical needs, aside from abortions and in-vitro fertilization, according to the website.

She sees patients who have experienced any kind of trauma. She says 15 percent of her caseload is women veterans, and “probably 90 percent” of those women she sees have had a sexual trauma, whether it’s trauma experienced in the military or outside of it.

There is no eligibility requirement if military sexual trauma is involved, Gray says.

“If a female has any mental or physical issue associated with MST, they automatically get free services. Of course, they have to be a veteran with honorable discharge,” she says.

Gray says examples of her caseload involves treating a woman with PTSD whose truck was blown up on patrol, with several of her fellow soldiers injured in the bombing, and seeing a woman who witnessed a woman being raped in Okinawa by two fellow service members. She says another recent case involved a female officer who said she experienced sexual trauma and then sexual harassment by her superior officer afterwards.

“Another woman was shot while on a gun truck and while she was recovering in a veteran’s hospital overseas, found out her husband was leaving her,” Gray says.

“These women have learned to be tough and to a certain extent numb, because it’s important not to fall apart while they’re in combat,” Gray says.

She says for women soldiers reintegrating into civilian life, role reversals can also be challenging.

“Before they left for war, they had been mothers, juggling all duties at home. Then when they return, they find that their partners have assumed those roles. The husband has become very competent, and the women can have a hard time readjusting to not being in that role.”

Distress also comes when veterans return and have to look for employment.

“And if they’re lucky enough to have a job waiting for them, lots of time they have a hard time readjusting to roles where they are not in leadership at work and they were in the military,” Gray says.

She says some women veterans have a sense of disgust with civilians and may feel like they don’t fit in anywhere. “They think, ‘You have no clue about me, and I really can’t fit into your world again after what I’ve done and seen,’” she says.

Gray says it takes at least a good year to readjust, and in some cases, much longer.

She adds that it’s even harder on women who leave children behind when deployed.

“Fifteen months is a long time to be away from family. And it’s harder than it is for many guys because wherever they are, they have to be comfortable serving in an all-male environment,” she says.

Liss says part of her responsibility as a women’s veteran program manager is asking nosey questions such whether they feel safe where they’re living, whether they’re going to school, and whether they need legal resources.

She says getting people plugged into resources is her biggest priority. Women veterans are assigned a primary health care provider and any specialists they may need. Vets get help from community partners with housing, education and in many other areas of their lives, she says.

It’s hard for civilians to understand some of the complexities these women face, she says.

Women vets in general, Liss says, don’t want to distinguish themselves from male counterparts. “A lot of women struggle with identifying themselves as veterans. It is a challenge to self-identify as a veteran,” she says.

Ultimately, she says, women need to make health care a priority in their lives.