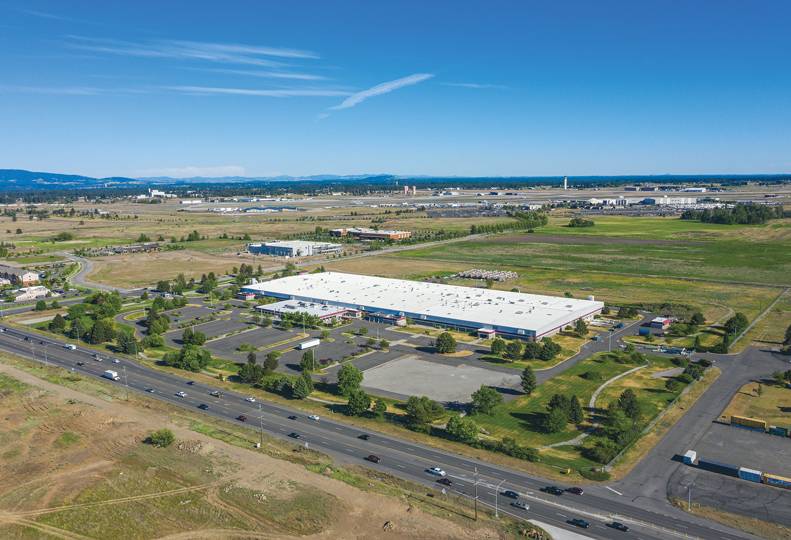 Now that Triumph is occupying about a third of the building and planning to move out within two years, Hemmingson and Lakeside Capital Group LLC’s executive team envision a sprawling manufacturing hub that would house multiple businesses staging their operations on the site.

“I just feel we can develop it into something amazing if we take our time,” says Hemmingson, who turns 68 this month. “We’re going to be patient about how we approach that. It’s an amazing asset for the community, and we’re just in hopes that we can make sure it houses good jobs.”

Through his Spokane-based investment company Lakeside Capital Group LLC, Hemmingson acquired the property and warehouse at 1514 S. Flint for $13 million earlier this year, according to the Spokane County Assessor’s Office.

Hemmingson says Triumph will continue to lease the remaining 100,000 square feet of space it still occupies as it winds down its operations there. The airplane-parts maker is expected to cease all operations at the site within the next two years, he says.

“I have hopes that it doesn’t turn into another warehouse. The attribute of this building is that it’s set up for lean manufacturing. It’s fully air conditioned, heated,” Hemmingson says about his latest acquisition. “Our hope is that we find some businesses that have more significant employment than just a cold-storage warehouse.”

Hemmingson and his leadership team say they’ve had multiple conversations with both local and out-of-area manufacturers about accommodating their operations at the site.

Melissa Williams is Lakeside Capital’s president. She says the building is just one component of the acquisition.

“There’s a lot of land in the front that has an awful lot of business opportunity and to the back as well,” she adds.

Behind the existing manufacturing plant sits 20 acres of undeveloped land that can be built to suit the needs of other businesses. Meanwhile, an almost equal amount of space rests directly to the front of the building, fronting on U.S. 2, she says.

The plant originally was built by commercial aerospace company Boeing Co. in 1990 and used to make air ducts and floor panels for passenger airliners among other components. The Chicago-based aircraft manufacturer sold the land and building to Triumph in 2013. Triumph has used the plant to make composite flight deck interiors and floor panels too.

In January, however, Triumph announced it would eventually halt operations at the West Plains plant, citing significant production rate reductions to its core business due to the impact of COVID-19 and pandemic-related restrictions on the commercial aviation market and travel industry.

Hemmingson, a prominent Inland Northwest business operator and noted philanthropist, founded Lakeside Capital in 1997 with a goal of helping communities create jobs by developing businesses and acquiring land to support that effort.

Today, the private equity company manages about 20,000 acres of farmland in Washington and Idaho and has helped build more than 350 homes, according to Lakeside’s website.

Gonzaga University named its student university center the John J. Hemmingson Center when it opened in 2015, in recognition of Hemmingson’s contributions to the university and community.

Hemmingson, a native of Montana, says he decided to buy the Triumph plant as rumors swirled in aerospace circles that the company was considering closing the Spokane plant.

This despite the fact a company in which Lakeside Capital has an ownership interest, Post Falls-based ATC Manufacturing Inc., also was feeling the effects of cancelled and reduced orders due to the economic effects of COVID-19.

“I just mentioned to the (Lakeside Capital) team that it might be a great facility to buy, and Triumph wanted to sell it sooner than later,” Hemmingson says.

Lakeside Capital made the purchase before Triumph could list the properties for sale, Hemmingson says.

Jerry Reed, Lakeside Capital’s chief financial officer, says, “We’re not in a rush to just put somebody in here, or some companies in here. We want to thoughtfully go about it and make sure we’re putting the right companies in here.”

Hemmingson says the existing warehouse space remains a state-of-the art facility and rivals any across the region.

Hemmingson says the acquisition of the site is a strong recruiting tool for local manufacturers who may be giving thought to leaving the area.

“We want to make sure local businesses have an opportunity to stay here,” he says. “Absolutely a preference to local. But on the other hand, if somebody comes in and finds Spokane a great location then we want to be able to serve their needs as well.”

Hemmingson says he’s started to transition more to his philanthropic efforts and away from daily business operations in recent years.

“We’re all about building the community. I’m at that stage in my life,” he says. “I have a team that’s fully capable of continuing on what we’ve started in the area.”