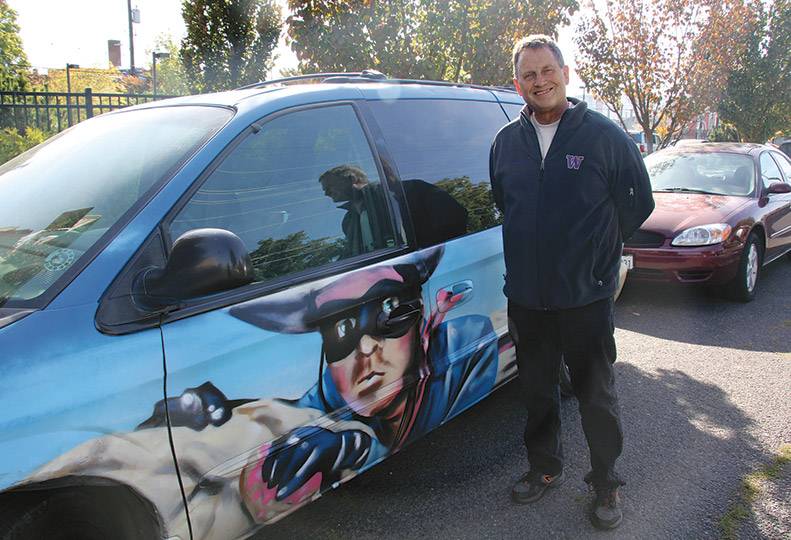 -—Virginia Thomas
David Ainley says his wife and business partner, Evelyn, came up with the creative name for the company. 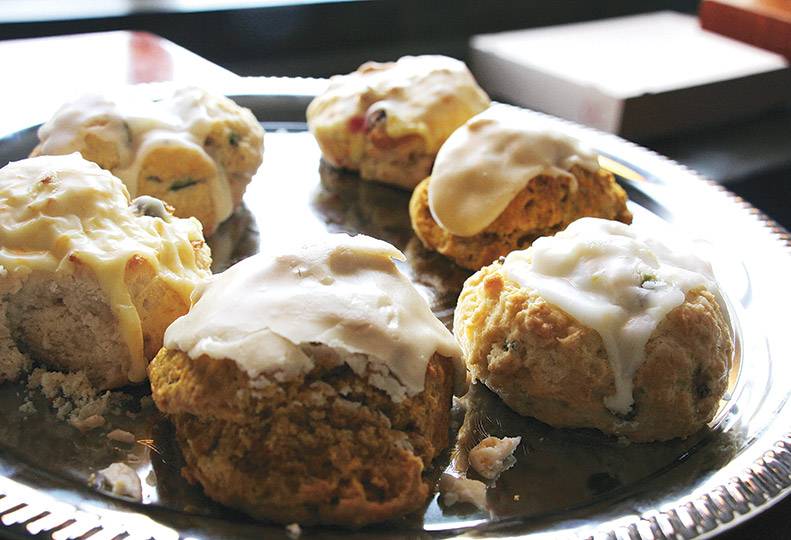 -—Virginia Thomas
The Scone Ranger sells scones to a number of Spokane-area restaurants.

David Ainley's Chrysler van features spray paint renderings of the Lone Ranger and his sidekick, wielding scones instead of pistols. In this distinctive vehicle, Ainley shuttles scones to area coffee shops and farmers markets, where he sells thousands of homemade scones each year through his business, The Scone Ranger.

Ainley has a degree in engineering, but due to head trauma from an injury he received while serving in the Air Force, he was unable to find a job at which he could excel after he left the military. He began taking accounting courses, and in the meantime discovered a love for scones at the now-defunct Cielo Bakery, which operated on Spokane's North Side.

"'This is the best scone I've ever had,'" Ainley says he once told the owner. "I'd go in every once in a while and have a maple-pecan scone."

When Cielo Bakery closed in 2009, Ainley decided to pursue a new path.

"There's a lot of accountants that have work, but one thing we don't have in Spokane is moist scones," Ainley says.

Ainley began baking scones from recipes Cielo Bakery had shared with him and soon found he had a knack for creating the pastries.

"I was making scones for a guy from our church," Ainley recalls. "We were playing pinochle, and he was on his third orange-cranberry when he said 'David, you've got something here."

Shortly thereafter, Ainley began selling scones at farmers markets under The Scone Ranger. Ainley says his wife, Evelyn, named the business after she had a middle-of-the-night epiphany.

In 2011, he was selling scones at a farmers market when he was approached by Wayne McMorris, who was a member of the board of the Spokane Public Market. Ainley began selling scones at the market a few months later, and The Scone Ranger continued to sell scones at the public market until it closed in 2014. However, Ainley says he wasn't entirely satisfied by the sales he made there.

"We had days where a good day for us would be $400 in sales, and that only happened on Saturdays," Ainley says. "When (the public market) closed, we just started selling to coffee shops and outdoor markets."

Ainley now sells more than 50 flavors of scones, as well as gluten-free, sugar-free, and vegan versions. Some flavors, like apple walnut, are fairly traditional. Others are more unusual, like the Greek Fetish scone, which is filled with sundried tomatoes and feta cheese, then topped with pesto. When he's ready to create new flavors he sits down with his daughter-in-law and the two brainstorm flavor combinations, Ainley says.

"'Habanero peach,' she'll say. I've never done that; it sounds intriguing. I'll have to get some habaneros,” Ainley says.

Ainley sells scones to Brews Bros., Tom Sawyer Country Coffee, Jacob's Java, and Wake Up Call year-round, as well as occasionally participating in events such as  craft fairs. His busiest time of year is summer, when The Scone Ranger appears at seven farmers markets in the Spokane area.

He and eight part-time employees run farmers market stands and bake three days a week at the Kitchen Spokane, in Spokane Valley. Ainley says he hopes to secure a permanent location eventually for The Scone Ranger.

"I'd love to have a place where we could sell scones, maybe a soup of the day," Ainley says. "The sooner the better, but I think in the next couple of years I'd love to try to find something we can do. It would be nice to get a little piece of earth, I could maybe put a pole building up and get it started."