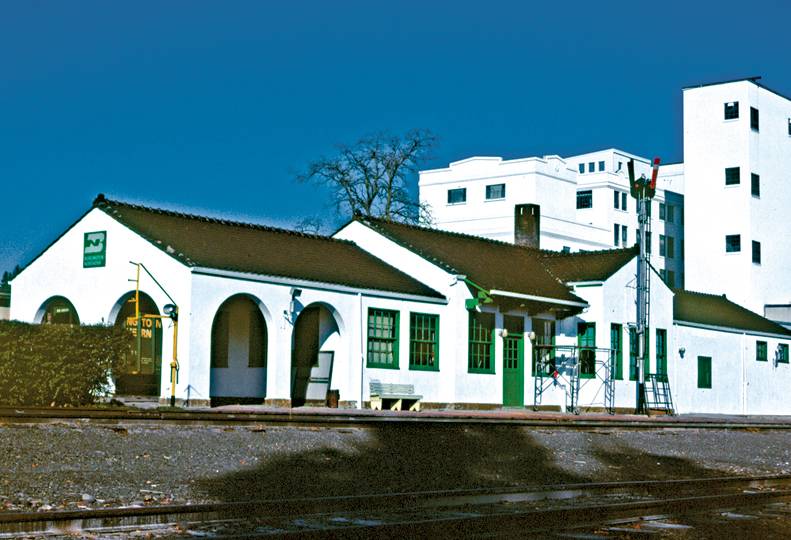 -Cheney Historical Museum
The 1960s-era photo shows what the Cheney Depot looked like when in full use. Long dormant, the building will be moved to a new location.

Plans to preserve the historic Cheney Depot are moving ahead, and the nonprofit organization supporting its preservation says the building could be moved to a new location as early as this summer.

“They’ve given us the depot, and they’ve granted us a temporary occupancy permit so that we can access the building with construction crews and get it ready to move,” Beeman says.

The Cheney Depot Society plans to move the structure from its current location between active BNSF tracks near College Avenue to a site that covers most of a city block on First Street, between Union and I Street. Beeman says part of the property was donated by a community member, and the organization bought the rest.

Moving and restoring the depot, which was designed in the Spanish mission-style by former Washington Gov. Clarence Martin and constructed in 1929, will cost about $1.1 million, Beeman says. Spokane-based Walker Construction Inc. is managing the project. D.B. Davis Structural Moving & Raising, of Everett, Washington, will relocate it.

“The building is 26 feet wide and 120 feet long, and they believe they can move it in one piece,” Beeman says. “They’re taking a lot of care not to damage the historic fabric of the building, with the idea that it’s going to be restored.”

Beeman says Terry Mourning & Associates, of Spokane, is designing the restoration of the depot.

“The goal is to have some kind of active commercial use,” Beeman says. “It won’t be a museum, although there will be some permanent displays interpreting railroad history and its impact on the town and the local area.”

The Cheney Depot was determined to be eligible for the National Register of Historic Places in 1997, but Beeman says the building was never listed.

“The railroad didn’t want to call attention to the location due to safety concerns,” Beeman says. “There are active lines on either side of the depot, and there’s no safe public access to it.”

The depot stopped accommodating passenger operations in the 1970s. BNSF used the building for office and storage space until the mid-’90s, Beeman says.

In 2013, the company declared the depot to be surplus property and announced that the structure would be demolished. Two years later, the Cheney Depot Society was formed, and began communicating with BNSF to find a way to save the historic building.

The organization received approval for a $366,000 grant from the state Heritage Capital Projects Advisory Panel last fall, Beeman says, and needs an additional $200,000 to fund the project fully.

Once the depot relocation funds are secured, the project will move quickly, Beeman asserts.

“We had a board member use the analogy of a big, heavy freight train starting to move: It takes a long time to pick up any speed, but then pretty soon it’s rolling, and you can’t stop it,” Beeman says.