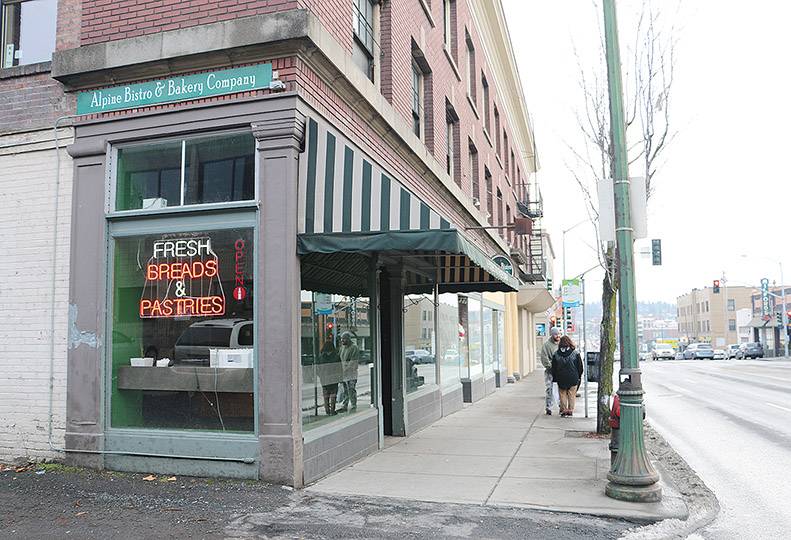 -—Judith Spitzer
The Jenkins Building, located along Monroe Street near the Spokane County Courthouse, is undergoing a $2.2 million remodel. The ground level will continue to be commercial space.

Demolition has started on the $2.2 million extensive remodel of the historic Jenkins building on North Monroe, says owner Mark Agee, Spokane business owner and developer, who purchased the building for $750,000 last May.

The 8,200-square-foot, three-story brick building will be converted to 12 to 14 apartments located on the second and third floors, with two commercial spaces taking up the main floor. Alpine Bistro & Bakery Co. currently occupies 3,000 square feet of space on the main floor, and another 4,500-square-foot space is currently available for lease.  The empty space was formerly home to a Bank of America local branch – part of the Charlotte, N.C.-based Bank of America Corp.

The building, purchased by Agee’s company Ten Talents, LLC, was named for David P. Jenkins, one of Spokane’s earliest benefactors according to early newspaper archives. Jenkins homesteaded about 160 acres north of the Spokane River when he settled here in 1880. Jenkins reportedly built the first college in Spokane, and donated the property where Spokane County Courthouse sits today.

Spokane-based Haines Architectural Service is the architect on the project. Agee Electric, Inc., of Greenacres, another Agee company, is the general contractor.

Agee is also the CEO of Spokane-based Pamiris, an HR management and payroll information systems, which he owns with his wife Alyssa Agee.

“The three bedroom units are tentative, depending on what people want,” he says. “There is also 6,500 square feet in the basement which will be used as tenant storage.” An elevator will also be added, he says.

Agee says the top two floors of the building, which was built in 1910, was a boarding house with two bathrooms on each floor, one for women and one for men. “The building has not been occupied since the 1970s. And many units on the second and third floors were in their original condition,” he says.

Work on the apartments includes restored hardwood floors, granite countertops, stainless steel appliances, and washer/dryers in each unit, he says.

“The apartments will definitely be very upscale,” he adds.

The refurbished apartments will be ready for rent come May or June, however Agee expects to start taking reservations at the end of this month.

Eventually Agee says he hopes to add rooftop access with a large patio and garden space.

Ten Talents will be the listing agents as well as property managers of the apartments.