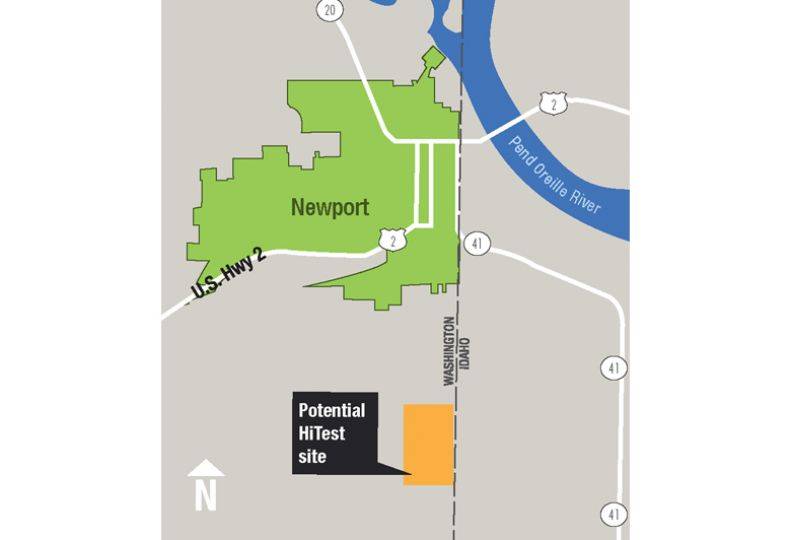 Edmonton, Alberta-based HiTest Sand Inc. is working on Plan C in its search for a site to develop a $300 million silicon smelter in northeastern Washington

HiTest Sand now is looking at a site south of Newport, says Colin Willenbrock, general manager of the Pend Oreille County Public Utility District, which would supply electricity to the facility.

It’s the third site HiTest has considered since the Washington state Department of Commerce announced a year ago that it had awarded a $300,000 development-assistance grant toward the envisioned project.

The state commerce department originally had announced the company planned to develop a smelter in Usk, about 15 miles northwest of Newport, that would create 170 living-wage jobs and produce silicon to be used by state manufacturers of solar cells and electronic devices.

Willenbrock says HiTest had dropped its request for power from the PUD and earlier this year was favoring locating the smelter at the former Northwest Alloys Inc. smelter site near Addy, in neighboring Stevens County.

More recently, however, HiTest has turned its focus to another site in Pend Oreille County, he says.

“For several months, they were doing due diligence at that site in Addy,” Willenbrock says. “They found more environmental contamination than expected.”

HiTest hasn’t submitted a new request for power yet, but the company is conducting its due diligence on the south site, which is owned by the utility and Pend Oreille County, he says.

Pend Oreille County Commissioner Mike Manus says the site is just outside of the city of Newport’s urban growth boundary, on the Washington side of the border with Idaho, a little more than a mile south of the U.S. 2-Idaho state Route 41 junction.

Pend Oreille County’s property records show the county and the PUD own three parcels of land there totaling 117 acres.

“We’re hoping to get an announcement from HiTest on that site in the very near future—by the end of the month,” he says.

The smelter could help boost the economy in Pend Oreille County, which chronically has had one of the highest unemployment rates in the state.

Manus says HiTest decided to seek alternatives to the Usk site largely due to uncertainty about the future of that property.

“A big part was property issues with the paper mill on the same site and HiTest’s needs for potential expansion,” he says. “Property negotiations weren’t working well for that site.”

Manus adds that the Kalispel Tribe of Indians also is seeking a federal air quality designation for its Usk-based reservation that potentially could tighten current emission limits for new and expanding industries near there.

He says preliminary air quality modeling that HiTest is conducting at the south site indicates the facility would be compliant with federal and state air-quality regulations even if the tribe’s request for a higher air-quality classification is approved.

“It’s bare land, so there isn’t any water, roads, or electrical infrastructure there,” he says. “There’s more of an infrastructure startup cost. The Ponderay Newsprint site was almost site ready.”

Pend Oreille County has long-term advantages over many other potential locations, he asserts.

“Cheap hydropower and the proximity to the product makes it an ideal spot,” Willenbrock says.

HiTest plans to refine high-quality silica from a mine it owns near Golden, British Columbia, about 300 miles north of Newport.

Commerce has designated the smelter facility as a project of statewide significance.

Though HiTest plans to burn large quantities of wood chips in the smelting process, Commerce has said the smelter will have a net environmental benefit in that solar cells manufactured in Washington will result in a net reduction of carbon.

Commerce spokeswoman Penny Thomas says she doesn’t yet have information to update the HiTest proposal other than the location for the smelter is in flux.

The Commerce grant has what’s called a claw-back provision, which enables the state to recover its investment if HiTest doesn’t build the smelter or meet performance requirements.