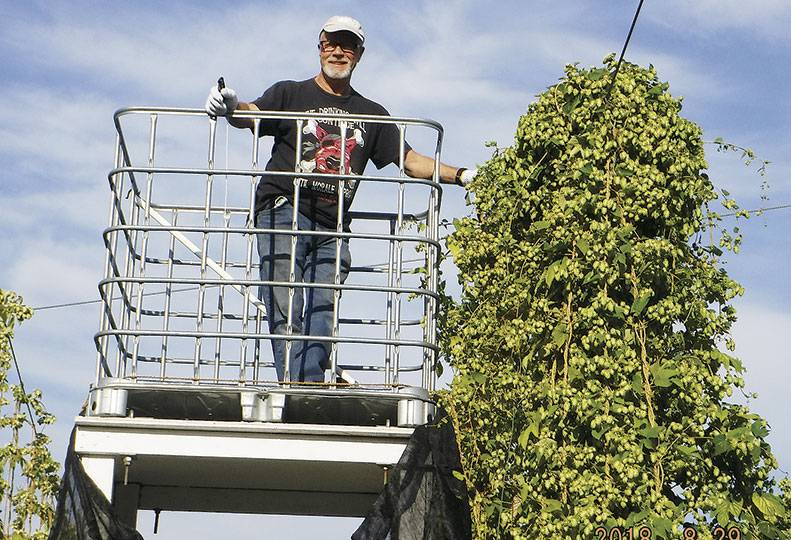 With breweries popping up all over the Inland Northwest, area hop growers say commercial hop-growing operations could germinate here—if only someone could provide a processing facility for small volumes of hops or invest the amount of capital necessary to create a large commercial hop yard.

“I think it’s pretty easy these days to sell hops to local breweries. The problem is economics,” Black says. “I did the math on it this year, and I made about $2.50 an hour selling hops. That’s not a success story.”

Black says he sold about 25 pounds of hops to three breweries this year. Lone Mountain Farms grows a quarter acre of hops, most of which Black saves for his own use. He says he first started growing hops for himself about 10 years ago, after he became involved in home brewing.

Hops used in brewing beer are the flowers of the hop plant. Because hop rhizomes, or roots, take a year to fully establish, most plants produce few hop flowers for the first harvest. Hop flower yields increase each year for healthy plants, meaning the longer the plant lives, the more hops it produces.

Black says that this is the first year he’s produced enough to sell, in addition to the hops he keeps for himself.

“We have enough space to where I could put another acre in if we really wanted it,” he says. “For us, that means a huge amount of labor. That’s going to be a hard sell for me to get that big.”

Jane Deitz, one of the owners of Green Bluff-based Big Barn Brewing and U-pick farm Bodacious Berries, says her husband began growing hops about five years ago for use in Big Barn Brewing’s beers; two years ago, they began producing enough to sell to local breweries.

Deitz says she and her husband, Craig Deitz, have invested thousands in their 2-acre hop yard.

“You need the poles, all the infrastructure, and that cost us about $10,000 to get that all up and running,” Deitz says. “The harvester that we purchased—and it was used—cost us $26,000. The pelletizer … the initial cost was about $4,000 but we’ve put money into it to keep it running every year.”

“What we sell is great, it’s just kind of frosting on the cake,” Stettler says. “Then we stick (the hops) in the freezer and make beer all year out of them, so it’s saving us quite a bit of money as a brewery because we’re not having to purchase from an outside source.”

Denise Stettler is one of the owners of Come On Get Hoppy, which is located about 10 miles northeast of Nine Mile Falls. Stettler says her husband, former Boeing electrical and mechanical engineer Paul Stettler, has built their hop harvesting and processing equipment, including a platform attached to the cab of a truck for harvesting hop vines, a harvesting machine, sorting machine, a hop dryer, and a refrigerated storage room. He and a neighbor, also a former Boeing employee, plan to build a machine to turn dry hops into pellets, which brewers say is more efficient and creates a more intense flavor. Hops are pelletized by grinding dried hops and compressing them into small pellets.

Even with her husband’s hand-built machines, Stettler says it cost about $13,000 to get the 1-acre hop yard started. Stettler, Paul Stettler, and Denise’s sister are the only workers at Come On Get Hoppy—all three are in their 60s.

“It’s the three old people that get it done,” Stettler says. “He retired from Boeing and I retired from nursing. I just wasn’t very satisfied with what we got (through) Social Security and pension, so it was just for a little bit of a boost in income. We didn’t want to bring on a whole bunch of work for us, just enough to keep us young and spry and keep a little income coming in.”

Last year Come On Get Hoppy produced a total of 55 pounds of dried hops. As their hop plants have become more established in the hop yard, the Stettlers have been able to grow a greater volume of hops each year. Stettler says they have sold 100 pounds of hops to Twelve String Brewing Co. and another 30 pounds to Black Label Brewing Co. LLC, so far this year.

Stettler says they explored other options, such as mushroom farming or running a bed and breakfast, but they found hops to be the best option—they already had a few hop plants for use in Paul Stettler’s home brewing, and hops grow well in the climate of this area.

“I think it’s the next natural step in the craft (beer) scene,” Dvorak says. “There’s enough smaller breweries like us that have popped up in the last five years that I think are all about trying to support the local smaller guys, because we are (one of them).”

However, Black says scale and costs are two obstacles to commercialization that hop growers face.

“If I was just going to be a wholesale hop farmer, I don’t think the breweries could afford what we’d have to charge,” Black says. “I think I’d have to charge about $10 a pound, wet, to make it worth my time.”

Dvorak says that volume is another challenge for hop growers who want to sell to breweries. He says Black Label Brewing Co. buys as much as 200 pounds of hops each year, and just one batch of an IPA uses about 10 pounds of hops.

Black Label Brewing Co. sometimes uses fresh hops from local growers to add to a beer for a more intense hop aroma, Dvorak says, but pelletized hops are more convenient for most brewers. Dvorak says pellets sink and disintegrate in liquid, whereas whole hops float and can clog equipment.

Black says something like the malting facility operated by Local Inland Northwest Cooperative Foods, a Spokane-based distribution co-op, could be a viable option for hop growers here.

The malting facility hydrates and dries grains from local growers before selling them to local brewers and distillers.

If a similar facility for processing hops could be established here and could process small amounts of hops from local growers, Black says a farm-to-brewery model could thrive.