Housing on the Horizon: $73.3 million in multifamily projects planned in region

Spokane-Cd'A complexes to have 542 living units 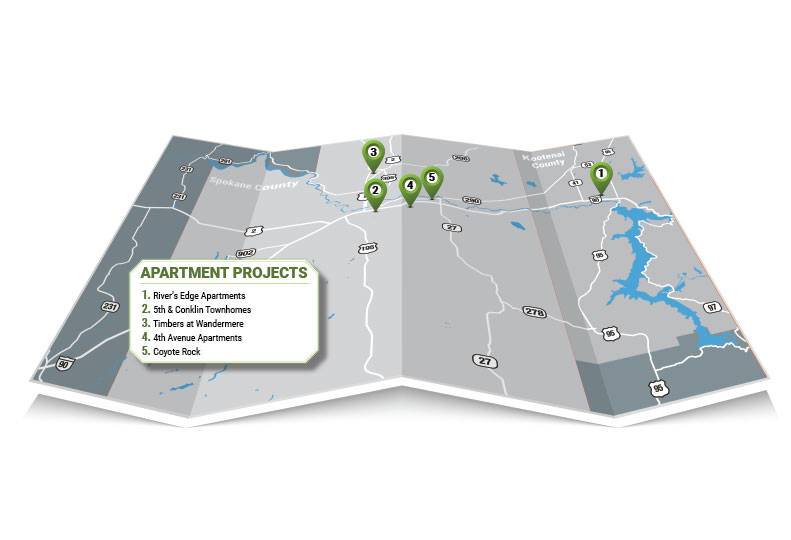 The development is the largest of several new multifamily projects in various stages of planning and construction in the Spokane-Coeur d’Alene area that will have more than 500 residential units combined with a total construction value of $73.3 million.

According to information filed for building permits recently issued by the city of Coeur d’Alene, the development by Lanzce G. Douglass Inc., called River’s Edge Apartments, will include 12 apartment buildings with 384 residential units and a club house.

Hilary Anderson, the community planning director for the City of Coeur d’Alene, says via email that construction has been completed on the water and wastewater utilities for the development. Other site work is underway, including footings and foundations, Anderson adds.

River’s Edge Apartments will be located in the Atlas District, part of Coeur d’Alene’s urban renewal district along the north side of the Spokane River, in west Coeur d’Alene. Russell C. Page Architects PS, of Spokane, is listed on Coeur d’Alene planning records as the projects’ architect, and Douglass will act as the contractor.

In Spokane, Redbone Construction LLC, of Colbert, has obtained building permits for a new residential development to be called 5th & Conklin Townhomes, located at 514 S. Conklin, south of Interstate 90, in the East Central neighborhood. The seven buildings will have 35 townhome-style units, according to city of Spokane permit records.

The permits list construction values ranging from $1.1 million to $1.7 million, with a combined value of $9.6 million.

Plans show the townhome-style structures will each have four to six units, and the buildings will have total living spaces ranging from 7,600 to 11,600 square feet.

About a mile north of the Spokane city limits, homebuilder Harley C Douglass Inc., of Spokane, has obtained building permits from Spokane County to construct three four-story apartment buildings with a total value of $12.4 million, at 724 E. Hastings Road. The three buildings will have 84 units combined, according to permit records.

The project site is located 11725 E. Coyote Rock Drive, near the south bank of the Spokane River.

Each building will have 5,000 square feet of living space. Four will have four units each, and one will have three units.

Reality Design LLC, of Post Falls, is listed as the architect for the development.