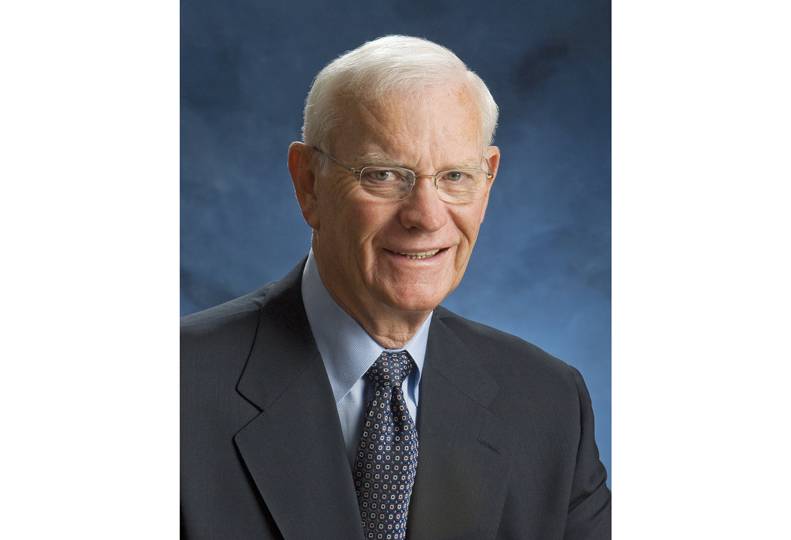 -Avista Corp.
Paul Redmond says he called Washington Water Power, now Avista Corp., upon graduating with a degree in electrical engineering. He says he pestered the company until it gave him a job.

Paul Redmond, former CEO, president and chairman of Spokane-based Washington Water Power Co., says he was warned that people would soon forget him after he retired following a 33-year career with the energy company now known as Avista Corp.

Then, about 30 days after his retirement in 1998, he called one of the managers at the company with an inquiry. When the manager’s assistant asked who the caller was, she didn’t recognize the name Paul Redmond and asked him to spell it out.

With a hearty laugh, Redmond jokes he didn’t realize he’d be forgotten that soon.

Contrary to that anecdote, Redmond’s influence and impact in Spokane won’t be forgotten readily, judging by recollections from Jon Eliassen, former chief financial officer at Avista.

Eliassen first met Redmond when Avista was still named Washington Water Power and, eventually, worked with him for at least 18 years.

Redmond was a man of the people, Eliassen says. Redmond made himself accessible to his employees, understanding the details of their work and their experiences.

Redmond navigated the company through some uncertain times as well. WWP was a part owner in nuclear power plants planned and under construction by Richland based joint operating agency Washington Public Power Supply System when that agency declared bankruptcy and shut the projects down.

The financial collapse of the operating agency in 1983 also caused WWP to suffer huge losses and write-offs, Eliassen says. The company had to make significant workforce reductions and couldn’t increase rates, so it was searching for ways to make money during the 1990s. Redmond was instrumental in creating and serving as chairman of a company called Pentzer Corp. that basically operated like an internal commercial lender and investment bank, Eliassen says.

Through investing in a lot of different companies that were separate from the utility business, WWP was able to maintain positive cash flow without raising rates, Eliassen says.

Redmond says, “I felt that by increasing our rates during that competitive time, we would just price ourselves right out of the marketplace.”

Eliassen says people responded to Redmond’s leadership with respect and a willingness to collaborate, which he attributes to Redmond’s constructive communication skills and his trust in other co-workers to fulfill their duties.

In the 1980s, when Spokane was, in the words of Eliassen, stagnant and economically unstable, Redmond and other leaders founded an organization called Momentum, which helped connect at least 100 business professionals and leaders in the area with the joint goal of improving the economic climate.

“We had to have a direction. We had to have the talent that is in our community in Spokane focused on certain areas of achievement, so we could see more jobs and results,” Redmond says.

Momentum helped set up different committees that would come up with proposals that would bring change.

Over a period of eight years or so, with the help of public input, Momentum developed 10 strategies related to venture capital, education, and infrastructure, among others, Eliassen says. He credits Momentum with shaping the University District.

The first academic building on the WSU Spokane campus, which at the time was known as Riverpoint Campus, was designed to facilitate entrepreneurship, Redmond says.

WWP, Redmond, and others at an executive level continued to heavily support education, Eliassen says.

“And I didn’t realize until after I left just how unique that was,” Eliassen says.

When Providence Sacred Heart Medical Center was putting together the new children’s hospital, Redmond and his wife, Barbara, helped raise $1 million as co-chairs of a fundraiser for the new facility.

Redmond met his wife, now of 59 years, while she was working as a head nurse on a floor of Sacred Heart.

“We’ve always been pretty busy, and I’ve always had the attitude that you needed to give back to your community,” Redmond says.

At WWP, Redmond says he was also part of a group that started meter reading company Itron Inc. Today, Itron is a successful spinoff company based in Liberty Lake that has become a global manufacturer of utility meter reading technology.

A Spokane native, Redmond attended Gonzaga Preparatory School and graduated from Gonzaga University in 1965 with bachelor’s degrees in biology and electrical engineering. By then, he had set his sights on a career with WWP, having turned down job offers from a few other companies.

The fact that WWP wasn’t actually looking to hire another engineer at the time didn’t bother Redmond. He kept contacting and calling the vice president of engineering, Joe Cannon, until Cannon grew weary of talking to him and finally succumbed, Redmond says.

On Redmond’s first day, one of his supervisors was confused and said he didn’t ask for an engineer. Another employee had to share his desk with Redmond, because there was no space for him. Yet within a year and a half, Redmond began moving through the ranks, he says.

After obtaining the position as assistant electrical engineer, he graduated to management and executive positions, eventually becoming assistant to the president before being named president and chief operating officer in 1982. He retired in 1998 after holding the chairman and CEO position for 13 years.

Redmond was also a member of the Washington Air National Guard for 21 years before retiring as a colonel. Eliassen says that Redmond’s leadership background with the guard, as well as the skills he developed at the company, made him an effective leader. During his last four years with the Guard, Redmond served as commander of a radar control squadron that was recognized twice as the most outstanding control squadron in the Air Force.

Among many other positions, Redmond has also had leadership and membership positions in Spokane United Way, Greater Spokane Chamber of Commerce, Spokane Lilac Festival, Spokane Catholic Charities and Providence Services and Providence Health and Services.

He and Barbara have three children and five grandchildren.

“The people who are most successful are the ones who are balanced between what they are, what they are doing as an occupation, and their family. They spend a lot of time with the family, as well as time with their job. They not only bring home the bacon, but also the applesauce … I think that is fundamental in success,” Redmond says. “Faith plays a big role in that, as well, because that is a guiding force.”