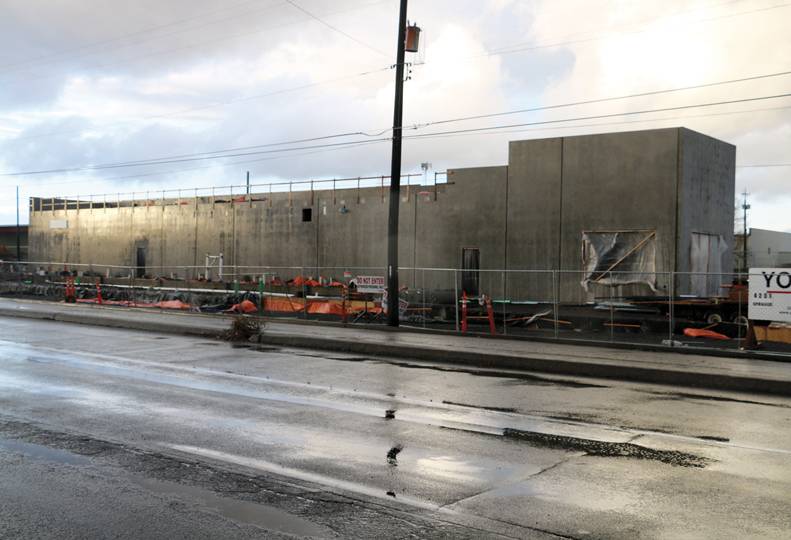 -KEVIN BLOCKER
The Metro Express Car Wash facility under construction along Sprague Avenue will be the fifth of its kind.

“There’s a rate of growth in the industry that’s never been seen before,” Martin says.

Construction started in mid-July on the 10,000-square-foot car wash building what will occupy a 1.2-acre parcel of land at the northwest corner of Sprague Avenue and Havana Street, he says.

His son, Derek Martin, who serves as Metro Express’ chief operating officer, says the company has targeted an opening of March 1 but will try to open before then if the weather allows.

Hayden-based Young Construction Group of Idaho Inc. is the general contractor on the project, and Josh Howa, of Howa Design Inc., of Twin Falls, Idaho, designed it. Verdis, a Coeur d’Alene-based design and construction company, has served as the project’s civil engineer, Bill Martin says.

Five years ago, the Martins opened the Metro Express Car Wash, in Coeur d’Alene, at 3131 Conference Drive, just east of U.S. 95, about a half-mile north of Interstate 90.

The Metro Express on East Sprague will be the fifth Metro Express, with the others located in Meridian, Idaho; Missoula, Montana; and Sheridan, Colorado, which is south of Denver.

At the time of its opening in 2015, the Sheridan Metro Express was considered the largest car wash facility in the U.S. That facility includes a 34,000-square-foot building on 3.5 acres of land, Bill Martin says.

He says the company plans to build other Metro Express car wash stations across Spokane Valley over the next few years.

“We’ve been in the Spokane market off and on, and now seemed like a good time to get back in,” he says.

In the 1990s, he developed Nu Look Car Wash, in Spokane, which he later sold to Tucson, Arizona-based Mister Car Wash, a national chain that Martin was involved in founding. Martin started Metro Express in Boise in 2004, grew it to three outlets in Southern Idaho and then sold them to Mister Car Wash in 2013 before launching the latest series of Metro Express facilities.

Bill Martin, now in his mid-70s, has been in the car wash business for 51 years.

“What’s helping to fuel the industry’s growth is the improvement of the technology in the machines used to clean the car,” he says. “Also, customers love the subscription-based services. Those two factors have helped catapult the industry in unprecedented ways.”