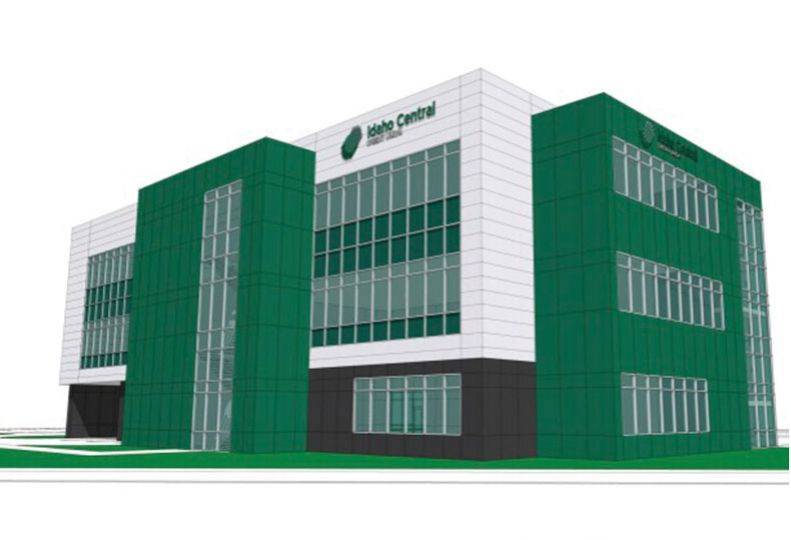 -—LCA Architects PA
The planned new Idaho Central Credit Union will have a total of 22,200 square feet of floor space. Construction is expected to be completed in late 2019 or early 2020.

The three-story building will have 22,200 square feet of space, says Wolsten. The first floor of the building will be a full-service credit union branch, he says. The third floor will house business and mortgage lenders and other administrative staff.

He says ICCU is still deciding how to use the second floor, but it could be used as space for other commercial tenants.

“Our goal and intention are to grow in Kootenai County,” says Wolsten.

Construction is expected to wrap up in late 2019 or early 2020, he says. J. Addington General Contractors Inc., of Coeur d’Alene, is the contractor, and LCA Architects PA, of Boise, Idaho, is the architect.

“We see (building this structure) as an investment in not only Idaho business but in Kootenai County specifically,” says Wolsten.

ICCU has 45 employees in Kootenai County already, he says.

Headquartered in Chubbuck, Idaho, near Pocatello, ICCU already has three branches in Kootenai County—one in Hayden, at 8760 N. Government Way, one in Post Falls, at 3343 E. Mullan, and one in Coeur d’Alene, at 1410 N. Government Way. The credit union was established in 1940, has 33 branches and about 1,100 employees in Idaho, and 300,000 members, says Wolsten.