Second-generation Gustavel to take over at first of year 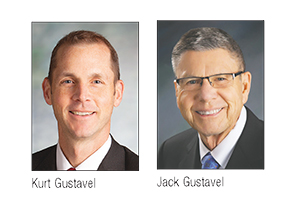 While its customers might not realize any difference in services or policy, Coeur d’Alene-based Idaho Independent Bank will face a big change come New Year’s Day.

On Jan. 1, Kurt Gustavel, 48, will take over the leadership of IIB from his father, Jack Gustavel, who founded the IIB in 1993.

The bank’s headquarters are located at 1260 W. Riverstone Drive, in the Riverstone development in northwest Coeur d’Alene.

While he’s stepping down as CEO, Jack Gustavel, 77, will continue in an essential role, serving as executive chairman of the bank’s board of directors. He says the change has been planned for quite a while, so the transition should be smooth.

“Many of the CEO and chief operating officer duties have already been divided,” he says.

There’s no lack of banking background with the younger Gustavel. “He knows the business,” his father says.  “He has more than 26 years of banking experience.”

Kurt Gustavel joined IIB in 1994, was elected to the bank’s board in 2003, and was appointed president and chief operating officer in 2005.  He has a bachelor’s degree in information systems from the University of Idaho and is a 2004 graduate of the American Banking Association Stonier Graduate School of Banking.

“We’ve been working together a long time,” Jack Gustavel says. “We think alike, and in general, the operation of the bank will remain unchanged.”

According to a recent IIB earnings report, the bank’s third quarter net income was $1.4 million, or 18 cents a diluted share, up from $1.1 million, or 14 cents a share, in the year-earlier quarter.

Gustavel attributes the rise in earnings to strong loan and deposit growth and an increase in the bank’s net interest margin.

The company’s net income for the first nine months of this year came in at $3.4 million, or 43 cents a share, an increase compared to $3 million, or 37 cents a share in the year-earlier period.

Taylor has since left the company to take time off to raise her triplet sons. “Lynn played a very important executive role for many years,” says Gustavel, who has 55 years of banking experience himself.

With its strong family origins, IIB will remain constant under the new leadership, Gustavel asserts.

“The general operation of the bank will remain unchanged,” he says. “There will be some nuances and things that will be different, but from the outside, I doubt if anybody will notice.”

The economy both locally and nationally has strengthened, increasing the demand for loans, Gustavel says.

“IIB is a relationship bank built on great service,” he says. “Our customers are prospering, and so is the bank.”

In 2016, IIB was ranked in the top 10 percent of community banks in the nation with assets under $2 billion by U.S. Banker Magazine.

Starting the bank was a challenge, and Gustavel admits there were tough times along the way.

“Through the financial crisis, we worked hard—seven days a week, long hours every day—and came out in good shape,” he says.

Having weathered the recession from years ago and coming back strong, IIB currently has about 200 employees and 11 Idaho branches located in Coeur d’Alene, Hayden, Boise, Caldwell, Meridian, Mountain Home, Nampa, Star, and Sun Valley-Ketchum.

The bank’s stockholders’ equity to average total assets was 10.1 percent as of Sept. 30, and IIB’s capital ratios exceeded the regulatory thresholds required to be considered well capitalized.

During the quarter, the bank purchased nearly 10,000 shares of its common stock for about $103,000.  IIB may still purchase shares worth up to $1.3 million under its current buyback approval.

The outlook is good, he says. “As the economy improves, IIB’s emphasis will continue to be on the customer and on relationship banking.”

He adds, “That’s a big reason the bank survived the financial downturn, and now that is what will carry IIB to the next level.”