White to serve as both CEO, CFO; Savitz stays on board of directors 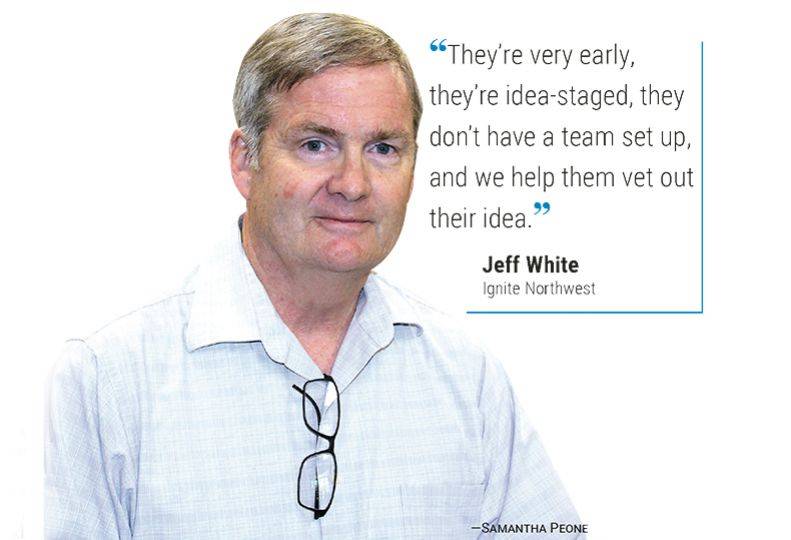 Effective Oct. 1, White also assumed the role of CEO, taking over for Bill Savitz, who will remain on the board of directors, says White.

As CFO, White handles all fiscal aspects of the organization, such as managing loans and grants, complying with audits, and ensuring Ignite Northwest is financially compliant. With his new role as CEO, White also is responsible for speaking with media, representing different initiatives throughout the Spokane area, and keeping in touch with people who have gone through the organization's programs, he says.

Both Savitz and White had gotten to the point where they only worked a couple days per week, says White, so they consolidated the positions.

Savitz says the role consolidation came down to funding.

"We didn't have adequate funding to maintain financial stability, so we came up with a cost reduction plan," says Savitz. Consolidating the CFO and CEO positions was part of that plan.

The organization acts as a business accelerator largely for technology-related and life sciences-related companies. Ignite Northwest also helps young startups find investors and investment groups and occasionally provides loans to qualifying clients through programs such as Ignite Northwest's Technology Growth Fund. The organization also keeps in touch with people who have been through its programs and offers a network of other classmates, he says.

Savitz stepped down from Ignite Northwest's day-to-day operations, rather than White leaving, for two reasons, he says.

First, White "can do my job, but I can't do his," says Savitz, laughing.

Secondly, he says he's achieved his goals for Ignite Northwest.

When Savitz originally joined the organization, he came on to help rebrand and build a business accelerator program, he says.
He also saw himself staying with Ignite Northwest between two to five years.

"At this point, I've done what I'd been brought in to do, and it was time to go and find something else to do," he says.

Savitz will remain on Ignite Northwest's board of directors as a member at large. He's been keeping his employment options open, and he says he might pursue one of the companies Ignite Northwest has helped nurture.

"I'd like to be back in the private, for-profit sector, so I'm keeping my eyes, ears, and options open," he says.

White says one of his goals as CEO and CFO of Ignite Northwest is to maintain financial stability within the organization. White declined to disclose the organization's 2018 budget, but 2019's will be about $600,000, he says.

Grants Ignite Northwest receives vary in amounts and duration, says White. Despite that, the organization still needs to stay financially viable—and it currently is, he says.

Another goal White has in his new position is to make people aware of different programs Ignite Northwest offers, such as SparkTrack, which just completed its first course and is gearing up for a second class to come through.

SparkTrack is a four-week accelerator program aimed toward people who have an idea for a product but haven't moved much further than that phase, he says.

"They're very early. They're idea-staged. They don't have a team set up, and we help them vet out their idea," says White.

Within those four weeks, people attend eight classes that discuss minimum viable products, market research, budgeting and financing, and other business topics, according to a program outline provided by White.

SparkTrack helps attendees determine whether their potential products would be viable, says White. People who go through the program might end up "back at the drawing board," he says, but attendees tend to be creative people who can formulate other product ideas.

Six people graduated from the first class, says White, and he expects six or seven people to join the second. A $500 fee is required, but Ignite Northwest can work with participants on that, he says. People who want to sign up can contact John Overby, senior business consultant with Ignite Northwest.

If students are ready, they can move on to the 12-week accelerator after SparkTrack, he says. Unlike SparkTrack, the 12-week program spends an entire week discussing a single topic.

White grew up in Ritzville, Wash. and has extensive experience in leadership roles with manufacturing companies. Prior to joining Ignite Northwest, he worked as CFO of Garco Building Systems Inc., in Airway Heights, and as CFO of Spokane-based Scafco Corp., he says.