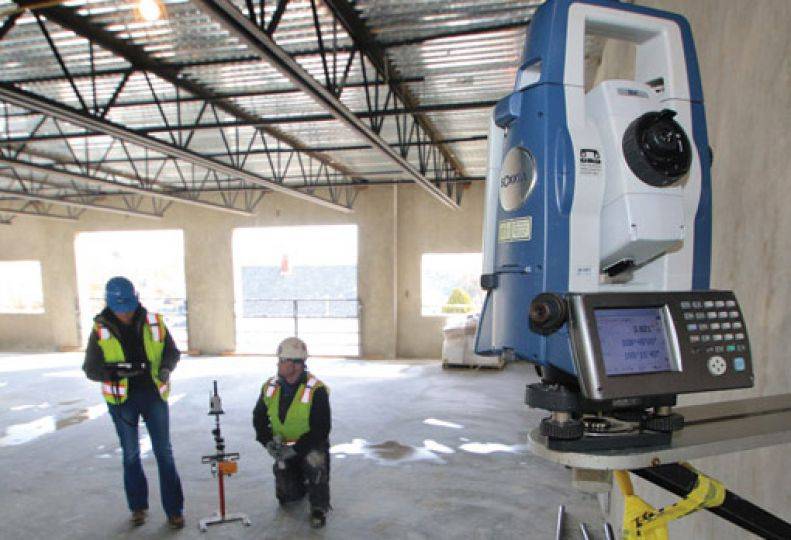 -—Mike McLean
A robotic total station device, in the foreground, communicates with its operators via a computer tablet and laser spotting device to pinpoint locations for drill sites and anchor points for installing critical building systems. 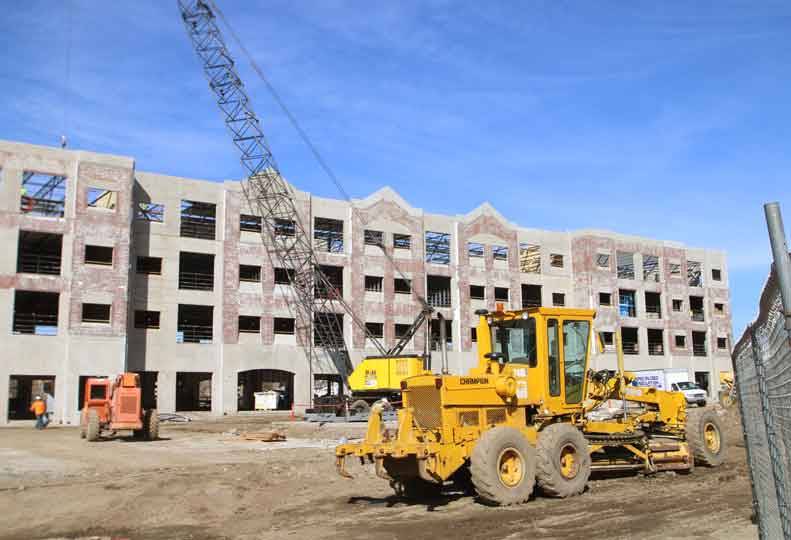 -—Mike McLean
Work began on the Matilda Building, located at 1028 N. Hamilton in the University District, last August and is expected to be completed this August.

Construction and energy efficiency contractor McKinstry Co. is introducing a technology to the Spokane market that reduces installation time for mechanical, electrical, and plumbing systems, says Gary McManus, a senior project manager for the Spokane operations of Seattle-based McKinstry.

McKinstry is debuting the RTS technology here on the 88,000-square-foot, four-story Matilda Building project under construction at 1028 N. Hamilton, in the University District.

The company has been utilizing the technology in Seattle-area projects for a few years, and the Matilda Building is the first project in which it is being used to integrate 3-D digital designs in the Spokane market.

The “robot” part of the system involves a computerized piece of equipment about the size of a home coffee maker that’s centrally positioned in the construction site. A pair of operators carry a computer tablet and a laser spotting device that communicate with the RTS to pinpoint anchor and drill hole sites for installing various systems.

The conventional method for installing systems requires a crew to grid the building manually to match installation locations with design plans.

“Using strings, squares, and plumb bobs takes up a lot of time,” he says.

The grid method can take a week or two per floor to map out anchor points and hole sites, he says.

“Now, we can do four floors in a week,” McManus says. “That’s four times the speed and half the crew size.”

RTS also is more accurate than the manual grid method, he contends.

“Structural steel deviates and is less accurate as you go up,” McManus says.

The ability of RTS to incorporate building integration modeling enables McKinstry to prefabricate building system components in its shop rather than constructing them in the field, McManus says.

“Now we’re doing more fabrication in the shop, and we don’t have a lot of broken or lost parts in the field,” he asserts.

In regards to plumbing systems, McManus claims, “It eliminates 70 percent of the joints we would have to do in the field. We’re realizing we’re not buying quite as much pipe as we had estimated.”

Efficiency improvements also apply to installing other systems, including electrical and mechanical, he say’s.

The mechanical systems for the Matilda Building will include a ground-source geothermal heating and cooling system that McKinstry will begin drilling wells for this month.

“Ground-source heating and cooling is a sustainable and efficient source of energy that will reduce the carbon emissions of the building,” he says.

McKinstry’s Spokane operations are based in the University District at its historic SIERR Building at McKinstry Station, which the company redeveloped a few years ago.

The Matilda Building construction work began last August and is scheduled to be completed this August.

McManus says, “Scheduling is a big deal. We’re pushing the envelope to try to get out in front of the schedule as much as we can.”

The development will include 57 upscale, one-bedroom to three-bedroom apartment units on three floors above ground-floor retail space.