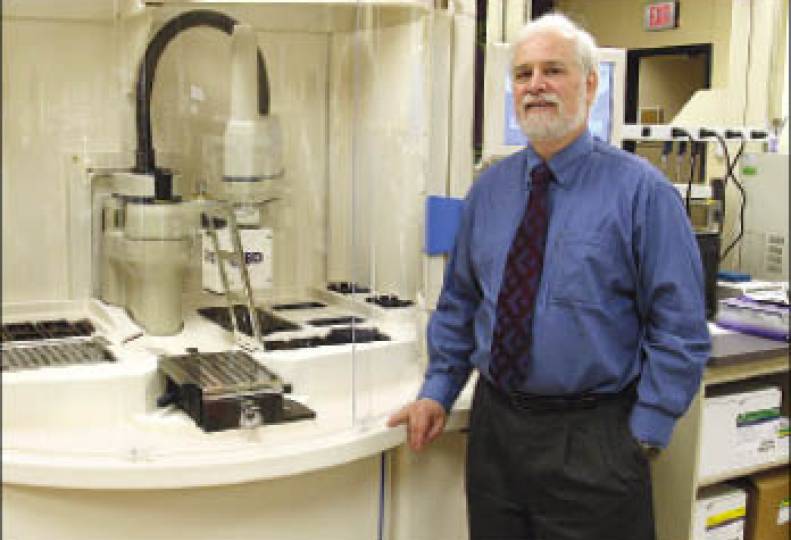 -—Staff photo by Paul Read
InCyte medical director Dr. David Hoak says new testing devices, such as this one that tests Pap smears for chlamydia and gonorrhea, help the lab compete in the marketplace.

Spurred by tightening margins and heightened competition, longtime Spokane Valley laboratory InCyte Pathology PS says it's getting more aggressive about both the services it provides and the markets in which it seeks new customers.

InCyte, which years ago was known as Pathology Associates and once was a sister operation to the big Pathology Associates Medical Laboratories, or PAML, provides tissue and cell pathology testing to hospitals and physicians across the Inland Northwest. It currently employs about 125 people, mostly at its lab in the Mirabeau Point area, although a few of its 22 medical pathologists are based in hospitals, where they provide on-site management under contract for pathology labs.

Over the past year or so, the practice, which is owned by 18 of its pathologists, has brought on sophisticated new equipment that, while also providing new capabilities and greater testing accuracy, notably positions InCyte to boost its volume, says Dr. David Hoak, the practice's medical director.

This week, InCyte is launching a new test, made possible by the purchase of a new testing device, to screen women for the presence of the human papillomavirus (HPV), which is associated with the development of cervical cancer, Hoak says. The test is done in combination with routine Pap smear testing.

Last month, the practice began using other new equipment that does amplified DNA assays of Pap smears to screen for chlamydia and gonorrhea. It also has added other new automated equipment that helps it test faster and more effectively for various cancers in human tissue, and it is ushering in new gear and processes to add or enhance bar coding to all of the more than 500 specimens it processes each day.

All of those efforts, as well as a desire to be more assertive in marketing outside of the Spokane area, are in response to stiffer competition, partly from labs located thousands of miles away, that also are looking to boost volumes in the face of tightening margins, Hoak says.

"That has driven a lot of our change," he says, adding, "There is a need to get bigger."

Hoak says that labs across the country are pressing to add specialties, create efficiencies, decrease turn-around time, and boost volume in order to compete, and that InCyte now sees labs from as far away as New York and Oklahoma trying to tap the Spokane market, by having doctors here send their patient specimens across the country via FedEx.

"The technology we use is not cheap," he says. "You have to spread the cost of using it over more and more patients."

CFO Tom Rehwald says InCyte has added much of the equipment through leases and other use agreements rather than outright purchases, so it's difficult to quantify the capital outlay of such investments, though he describes the financial commitment as "significant."

In some cases, he and Hoak say, a single piece of testing equipment can cost $200,000 or more.

InCyte is what's known as an anatomical pathology lab, which means that it focuses on diagnosing diseases in tissue, organs, and cells, as opposed to clinical labs such as PAML, which specialize primarily in testing bodily fluids such as blood and urine. InCyte does do some testing of fluids, but in such cases it studies the cells contained in such fluids, rather than the chemistry of the fluid, Hoak says.

The practice's headquarters and lab are located in a 26,000-square-foot building it developed in 2005 at 13103 E. Mansfield, in the Mirabeau area northwest of the Evergreen Road-Interstate 90 interchange.

It has no other facilities, but some of its pathologists are based in hospital labs here and around the Inland Northwest, where they, in some cases, serve as the medical directors of those labs under contract with the hospitals.

Currently, it provides medical-director management to 13 hospitals, which in some cases entails having a pathologist based at the facility full time. Among the hospitals where it provides such management are Providence Holy Family Hospital and Valley Hospital & Medical Center here, and Kootenai Medical Center, in Coeur d'Alene. It also provides laboratory consultative services to nine other hospitals. Most of its testing volume, however, comes from individual doctors and clinics, Hoak says.

One of the current initiatives at the lab is an effort to develop a bar-coding system to label the tissue samples received there. New equipment prints out bar codes that provide both patient data and digital instructions that are read automatically by the testing equipment in the lab, and the codes follow through the lab the 150 to 200 biopsy specimins it receives each day. Hoak says InCyte began the bar-coding effort late last year and should have it fully implemented on the tissue side of the building later this year. After that, it hopes to begin implementing the change on the cytopathology side of the lab, he says.

Much of the other new equipment installed in the lab in recent months generally provides faster, more accurate, and more thorough testing of specimens, including one device that can run 30 individual antibody tests simultaneously on a group of biopsy slides from a single patient.

The new device that InCyte announced this week that tests for HPV in women uses technology approved by the U.S. Food and Drug Administration a year ago. The equipment is sophisticated enough that it can isolate two specific types of HPV that together are associated with 70 percent of all cervical cancers, the practice says.

Hoak says the next big frontier for the lab will be "digitizing" specimens, or essentially creating electronic images of cells and micro slices of tissue, which then could be shared and stored electronically. That kind of technology, which already is used commonly among radiology providers, might still be five years away for a lab the size of InCyte, due to its cost, he says.

Meanwhile, InCyte is looking to accelerate further its efforts to win business outside the Spokane area, although it says it's too early to provide many details about those plans. About 18 months ago, it hired a sales and marketing manager, and it now works with hospitals and physicians from Bonners Ferry, in North Idaho, to the Tri-Cities and Moses Lake, in Washington. It even handles some specimens from as far away as Alaska, Hoak says.

InCyte also has worked to increase the number of pathology subspecialties for which it has expertise, and now has specialists in such fields as dermatologic, placental, oral and maxillofacial, renal, urologic, and gastrointestinal pathology.

InCyte was started here in 1957 and was known in its early days as Patton-Stier Laboratories. It took on the Pathology Associates name in 1965. In 1969, the practice was split in two, with the PAML operation becoming independent. Pathology Associates changed its name to InCyte in 2003.