Up to 176 new residential units proposed; upgrades to airport have been recently completed 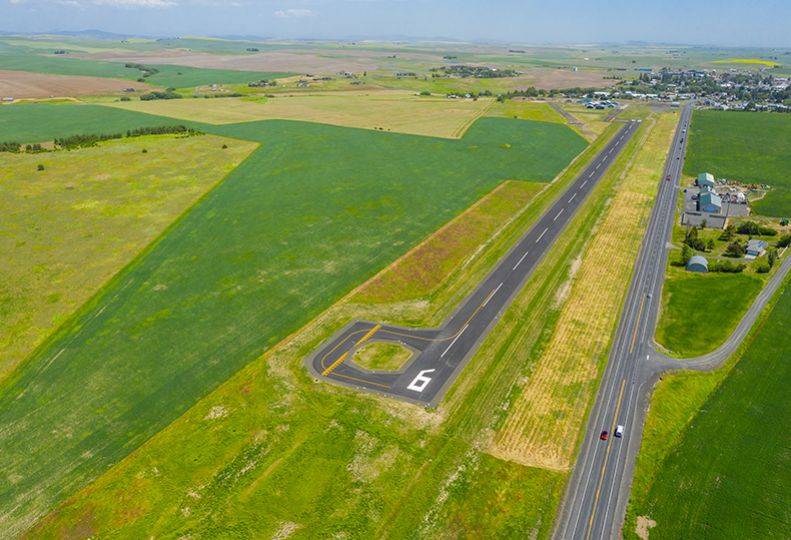 -—City of Davenport
The $5.85 million runway extension has been recently completed at Davenport Municipal Airport. Now, Airlift Northwest has secured a presence there.

The city of Davenport, 36 miles west of Spokane, is expecting an influx of up to 176 new residential units in the Lincoln County seat that had a population of barely 1,700 people as of the last U.S. Census Bureau count in 2020, says Steven Goemmel, city administrator.

With the average Lincoln County household size of 2.53, according to Census data, such a boost in the number of homes could increase the city’s population by over 25%.

“During COVID, people started buying up all the (infill) lots that we never thought would be built on, but they found a way,” says Goemmel.

With most of the infill lots sold and with the city being landlocked by farmland, two prominent developments recently have been annexed into the city, and they are the only properties on which such residential developments are possible until more land is available, such as through future annexations, he says.

The new developments are the Dugger plat, which is on a 20-acre property owned by Spokane-based Avista Corp., and the 49-acre Hill Crest development annexed into the city on the northwest corner of Davenport.

Patrick O’Rourke, the owner of the Hill Crest Davenport LLC development company, says the site’s water and sewer infrastructure has been completed. He says the site is ready to begin building, and he’s looking to sell the lots to homebuilders.

“We are in a wait-and-see mode to see if lot sales increase,” says O’Rourke, who adds that he hopes to sell the lots for about $60,000 each.

The entire 49-acre development site is slated for 115 single family residential homes, with about 6 acres set aside for 34 multifamily units, says O’Rourke.

He plans to develop Hill Crest in three phases, starting with 23 single-family homes in the first phase.

“I’m optimistic that growth is coming, and we’ll start sooner rather than later,” he says.

Goemmel says single family-homes are selling for over $300,000 for the first time in Davenport.

Avista Corp. has agreed to set aside roughly 6.5 acres in the southern portion of the Dugger plat for residential development of up to 27 single-family units, Goemmel says.

Separately from the residential development plans, the city recently completed a nearly $6 million reconstruction project at the Davenport Municipal Airport to meet the growing air traffic at the facility, says Goemmel.

Tom Headley, an engineer with Century West who oversaw the project, says the runway is nearly 3,300 feet long and 60 feet wide.

Century West also assisted the city of Davenport in securing eight grants from Washington state Department of Transportation and the Federal Aviation Administration to finance the project.

“In total, the FAA and WSDOT provided approximately $5.79 million of the $5.85 million overall cost, or roughly 99% of the overall program cost,” Headley adds.

From the start of the project, the airport has almost tripled its number of hangars to 16 from six, with three more planned, says Goemmel.

In the northern part of the airport, a crosswind runway was decommissioned and now is being used as an access road, resulting in about 700,000 square feet of free space. The city subsequently partnered with the Lincoln County Economic Development Council to secure a grant to install the water, sewer, and power infrastructure needed for future light commercial development related to airport services, such as aircraft hangars and facilities for aviation-related businesses, Goemmel says.

The airport also has secured a contract with Airlift Northwest, the nonprofit air ambulance entity of University of Washington Medicine.

“They serve all of Washington, except the northeast corner, and were looking for a home and selected Davenport,” explains Goemmel, adding that Life Flight Network, which has a base at Felts Field, in Spokane, is the only other air ambulance service in northeast Washington.

“It’s a benefit to the entire region, not just the (Davenport) community,” notes Headley.

Construction of Airlift Northwest’s permanent quarters is underway on the north side of the airport and is expected to be completed in the fall. The project is valued at $2 million, and Davenport-based Halme Builders Inc. is the contractor, says Goemmel.

The airport project was named “2021 Project of the Year” by the Washington Airport Managers Association.

The Davenport Airport was founded in 1945 and is located on the western edge of Davenport, at 200 S. Gunning Road.