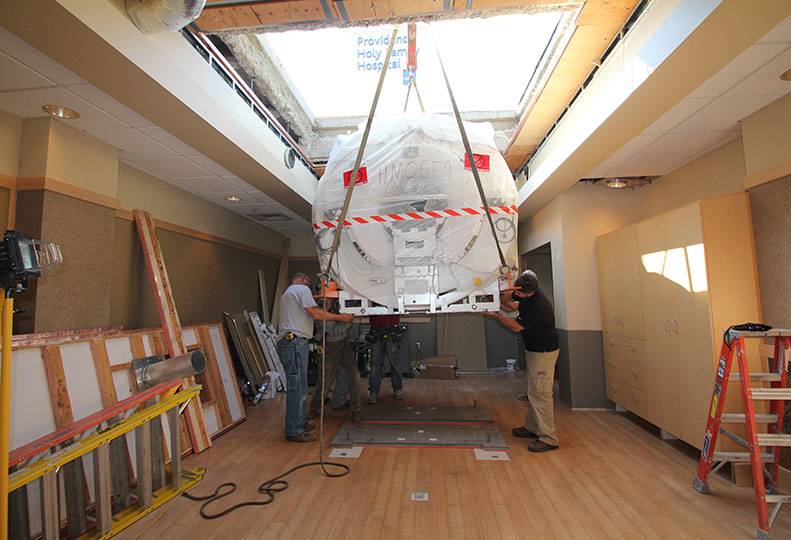 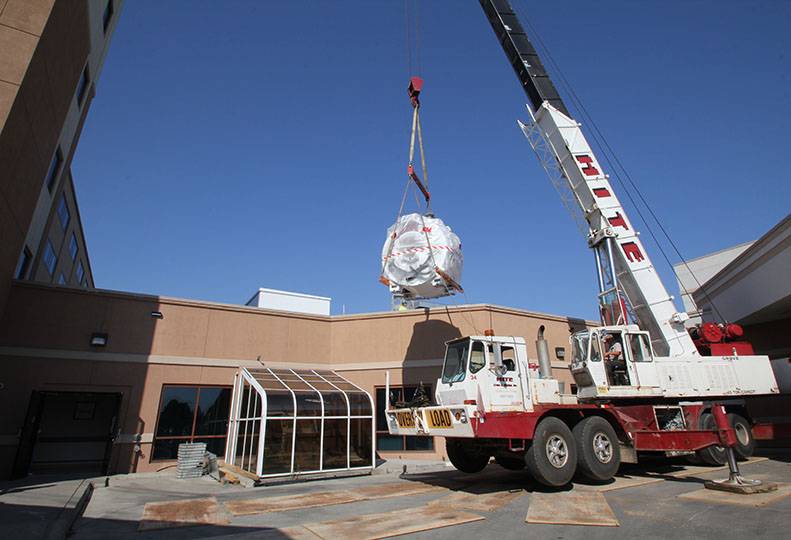 Inland Imaging LLC, of Spokane, has added a new wide-bore magnetic resonance imaging machine to its operation in Providence Holy Family Hospital, on Spokane's North Side.

Inland Imaging installed the new device earlier this month, and company Chief Operating Officer Kathleen Wilson estimates the new machine will begin running scans on patients on Thursday, Sept. 26. The time between the installation and that date will be used to get the new machine up and running and to train staff to run the new machine.

The six-week installation project will end up costing about $1.5 million, with the machine itself costing $1.3 million. Inland Imaging funded the project through its operating cash and reserves, Wilson says.

"We've been saving up to get this one for a long time," she says. "There's new technology available now, that's why we waited and saved up our money."

The MRI machine, manufactured by General Electric, weighs about 12,000 pounds and will feature a larger bore than a typical MRI machine, so it can accommodate larger patients, Wilson says. The bore is the center opening where the patient lies. The machine's table also has variable cushion densities to alleviate pressure points and reinforcements that enable it to accommodate up to 500 pounds, Wilson says.

"This allows us to image a higher percentage of the population," she says.

The new MRI machine also will use new technology that allows for better scans, Wilson says. For example, GE software known as metal artifact reduction software (MARS) will enable doctors to get clearer scans on patients who have metal implants, she says.

Implants such as joint replacements are MRI compatible, but cause what is known as an artifact, or distortion, in the image. The distortion is what happens when the metal implant causes a range of frequencies during the scan. The MARS software can capture these varying frequencies and combine them for a final image that is clearer.

"This new generation of machine is faster and clearer," says Wilson.

The machine also features what is called geometry embracing method coil technology. These magnetic coils are placed around the body part to be scanned. In this machine, the coils are built into the table that the patient lies on and follow the contours of the body. This lets doctors scan multiple parts of the body without repositioning the patient, which makes scans quicker and more efficient, says Wilson.

The GEM coil technology also allows some scans to be done in the MRI machine feet first, which along with the larger bore can help ease anxiety for patients who suffer from claustrophobia. These measures are all designed to help patients relax, which helps scans get done faster and results in better and clearer images for doctors to diagnose from.

"Quicker is better; more relaxed is better," Wilson says. "It's much easier for the patient."

In addition to the MARS software and the GEM coils, the MRI machine will have new cardiac software for heart images. However, more standard types of scans will also be performed using the machine.

"It'll do all kinds of MRI scans, such as neuro imaging, knees, head injuries, strokes, and more," says Wilson.

The process of acquiring the new MRI began with Inland Imaging officials assessing clinical needs and determining any limitations with the current machine, Wilson says. Once they decided a new machine was needed, different manufacturers were compared, and ultimately the decision was made to go with GE.

The first step in installing the new MRI, Wilson says, was for GE workers to turn off the old machine in the imaging suite. The GE staff then worked with Bouten Construction Co. and Hite Crane & Rigging Inc, both of Spokane, to remove a roof hatch above the suite so the old machine could be lifted out. Bouten then did light remodeling in the suite and assisted Hite and GE in hoisting and placing the new MRI machine in the suite.

"All this is very disruptive, and we couldn't do this project without their cooperation," she says.