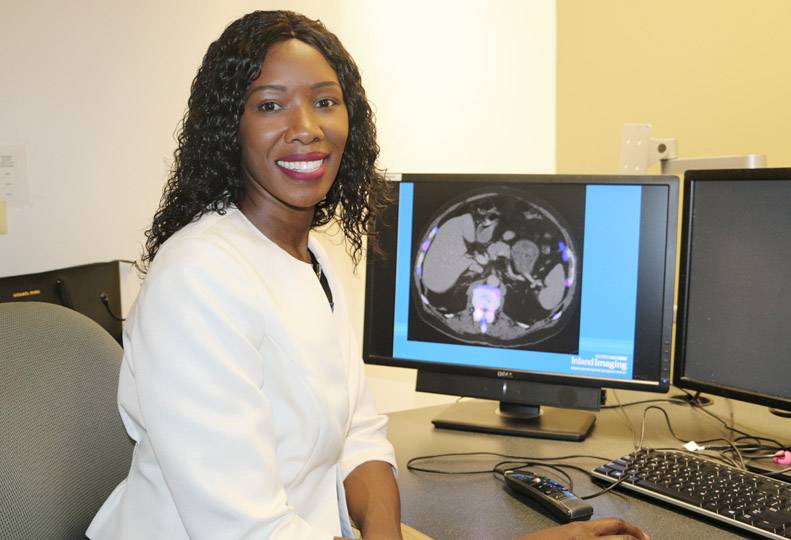 “This technology is something we’d been looking at as an improved patient offering for about five years now,” Mariner says. “It helps us to create a less ambiguous image, which allows for a more accurate diagnosis and ultimately, better patient care.”

Nuclear medicine imaging procedures like SPECT scans require the oral or intravenous injection of low-level radioactive chemicals, called radiopharmaceuticals or radiotracers, into the body. The tracer medication sticks to specific areas in the body, emitting gamma ray signals that are measured by a camera that rotates around the patient, providing a 3-D image of the system or organ being studied.

In a CT scan, images are obtained by an X-ray machine that rotates around the patient, creating multiple images or pictures of the inside of the body in greater detail than a conventional X-ray.

The images created by a SPECT scan show changes and abnormalities in cellular or organ function, bone growth, and blood flow, while images from a CT scan show abnormalities in the body’s structure such as tumors or cysts, enlarged lymph nodes, or abnormal collections of fluid, blood or fat.

He says the similarity between SPECT and CT in the method of image processing allows the images to be combined, which gives radiologists a more accurate diagnosis overall.

“In nuclear medicine, the SPECT scan image can tell us something isn’t working right, but it can’t always give us a precise corresponding location,” says Mariner. “The CT component gives us an anatomical reference for that image.”

“We began offering the procedure in June, and since then I would say we’ve averaged about 100 patient exams each month,” he says. “We hope to add this scanning capability at a second location as early as 2019.”

Dr. Irene Cruite is the lead nuclear radiologist with Inland Imaging. Dual certified in both nuclear medicine and radiology, she also specializes in body and oncologic imaging.

Cruite says the SPECT-CT scan is used most typically in assessing abnormalities in bones, lungs, the thyroid gland, and the parathyroid gland.  She says it’s also used in detection of infection and certain cancers, as well as in pre-surgical planning.

“The CT and SPECT images are complementary,” Cruite says. “The advantages of combining these images include earlier detection of disease processes and increased accuracy in identification and localization of abnormalities.”

Cruite says it’s possible a part of a patient’s body could appear normal in a CT scan, and a SPECT scan might pick up on abnormal blood flow, cellular activity, or infection. Therefore, she says, it’s common to see initial diagnoses altered by the new information that a combined SPECT-CT image can provide.

“It’s a powerful tool, which allows us to detect disease processes earlier, sometimes before structural changes start to occur,” she says. “Prior to this technology, we had to try to fuse the images, which takes more time and is much more inefficient for patient care delivery.”

Cruite says a typical SPECT-CT scan lasts about 30 minutes and requires the patient to lie as still as possible while the images are taken.

“It’s sometimes difficult for patients who’re claustrophobic or in too much pain to keep still,” she says. “In those cases, we find medication can sometimes help to relax the patient.”

While the procedure itself isn’t painful or lengthy, Cruite says patients are generally most concerned about the effects of radiation.

“The amount of radiation involved is actually very limited,” she says. “We’ve worked hard to ensure the radiation is minimal, and our levels actually are below the maximum allowed by industry standards.”

Because the SPECT scan uses an injected radiotracer, and the CT scan uses general radiation, Cruite says the training in how to use the machine and interpret the images is different for each.

“In order to use this technology, one must be trained as a doctor and a radiologist, as well as trained in how to acquire and interpret SPECT-CT images,” Cruite says.

Mariner says the majority of SPECT-CT scans done at Inland Imaging involve low exposure to radiation and don’t require staff to have both nuclear and radiological certifications.

“About 10 percent of the scans we do use what we call a diagnostic CT,” he says. “Diagnostic scans require someone who’s both SPECT and CT certified, as they involve a higher dose of radiation.”

Mariner says the typical cost of a SPECT-CT scan varies depending on the cost of the radioactive tracer needed in the SPECT portion of the procedure.

“I’d say the majority of exams are around $1,000, plus the cost of the radioactive tracer that’s used,” he says. “For simpler procedures like bone scans, the tracer is generally between $50 and $100. In more complex scans like those for cancerous tumors, the tracer alone can cost up to $4,500.”

Despite the cost involved, Cruite says SPECT-CT scans are expected to become more popular as a diagnostic tool.

“We’ve already seen an increase in the number of bone imaging patients,” she says. “As word spreads that we have this technology, I believe we’ll continue to see more patients using the SPECT-CT, particularly for pulmonary imaging, cancer, and bone scans.”

She adds that medical scan technology is constantly improving, with researchers working to refine its current uses and testing radioactive tracers for new kinds of testing.

“We are expanding our practice to image disease processes that otherwise could not be imaged without this technology,” she says.

Headquartered at 801 S. Stevens, Inland Imaging has over 700 employees companywide and operates seven imaging center locations in the Spokane area. These include one on the Providence Holy Family Hospital campus on Spokane’s North Side; one in the Sacred Heart Doctors Building, on the lower South Hill; another at the Providence Medical Park, in Spokane Valley; and another at the Spokane Teaching Health Clinic, near the Washington State University Spokane campus.

Additional locations include a Spokane Valley center, near Valley Hospital; a south Cowley center, on the lower South Hill, and a North Side center, near the Northpointe Shopping Plaza, just off the Newport Highway.