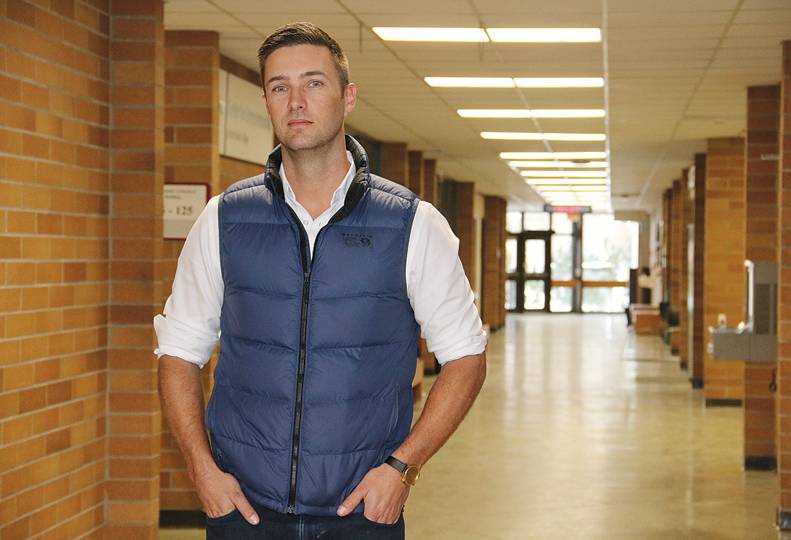 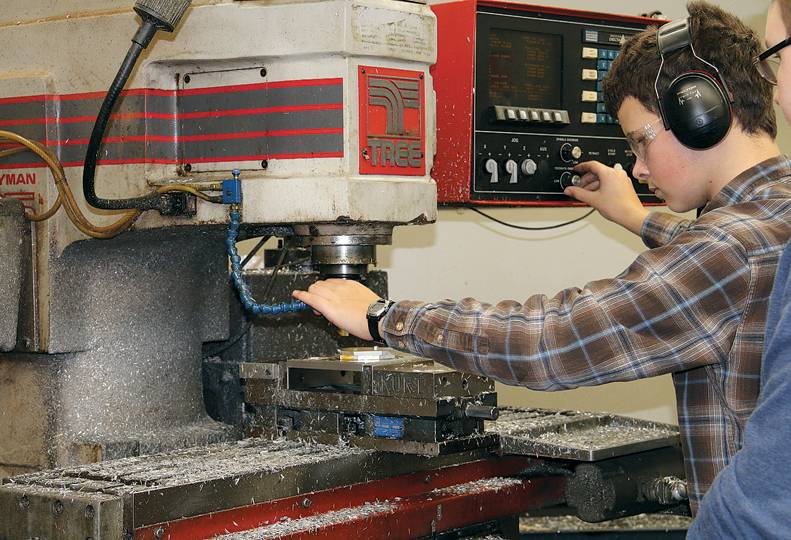 -—Natasha Nellis
A high school student works at Gizmo-CdA. The company estimates about 60 students use the lab each day and more than 400 people come through weekly.

There has long been a notion that to succeed in the technology sector, you have to relocate to Seattle, Boston, or the Silicon Valley. But a group of like-minded people in Coeur d’Alene are working to break that mold and turn the Lake City into its own entrepreneur ecosystem.

North Idaho College plans to launch the NIC Venture Center in the Hedlund Building at its lakefront campus, with the help of a three-year, $675,600 grant from the U.S. Economic Development Administration Office of Innovation and Entrepreneurship. With NIC matching some of those funds, total investment in the Venture Center will be nearly $1.3 million during the next three years.

The Venture Center will join the Innovation Den and its Innovation Collective, Ignite Northwest, and several private entrepreneurs in working to spark and maintain Coeur d’Alene’s startup scene, in the hopes of creating a sustainable ecosystem of innovation.

Coeur d’Alene has the highest density of startups in Idaho, according to research from Washington, D.C.-based Brookings Institution. The organization analyzed the Inc. 5000 list of startups nationwide and determined, based on the number of startups in relation to population, the density for each city. Coeur d’Alene, with its 17 high-performing startups mentioned by Inc. magazine and an average population of 139,501 between 2011 and 2018, has a density of 121.9, according to the Brookings formula.

That’s almost double the next Idaho city in the analysis, which was Idaho Falls, with a density of 68.6. Boise had a density of 64.3.

Rich Thrasher, co-founder of the Innovation Den in downtown Coeur d’Alene and an independent entrepreneur, says he has seen the startup scene explode in the last couple of years, especially in Coeur d’Alene.

“I think because it’s a small community, people are kind of forced into being entrepreneurs because that’s how you make a living in a small community … and one thing I’ve certainly learned is that people that live here really want to stay here, and many people who don’t live here really want to come here, but what often gets in the way is lack of jobs or opportunity,” Thrasher says.

Thrasher and his partners took the 115-year-old Elks building and renovated it to create the Innovation Den as a meeting place for innovators to network and build on their ideas. It currently houses the Innovation Collective and offers networking spaces.

“Now what we’re seeing is these companies that are springing up around here are attracting outside talent,” he says. “Instead of seeing our talent leave … not only are they starting their own businesses, but now we’re starting to lure talent away from those big city centers,” he says.

He attributes that turnaround to the quality of living in Coeur d’Alene and the strong entrepreneur ecosystem that has grown over the last couple of years.

Alvarado says his company has received multiple visits from Fortune 500 companies interested in his company’s technology, and says that consistently, most have expressed that they are more interested in companies that aren’t in big cities. He says Continuous Composites is working to prove that people don’t have to leave the Coeur d’Alene area to get good jobs in technology.

Alvarado claims the Lake City stands apart from other cities because of its beauty, and what’s more, the attitude of the people.

He says his experience with the Coeur d’Alene business world is different from that in Spokane in that it feels like what he calls the “old guard” in Coeur d’Alene is more willing to share what they have in knowledge and time, versus wanting to take a piece of the company.

In his experience, which he qualifies does not apply to all in the business community, “It’s different in Coeur d’Alene. The old guard recognizes the value in young entrepreneurs. My partner insisted on making me an equal partner … and looked past age to see the core values in me.”

A growing trend, Alvarado notes, is that a lot of the startups are involved in robotics or manufacturing, although he states he’s unsurprised by this.

“I think robotics are just the nature of where technology is going … and more people are having the courage to start their own company.”

This is a trend that Jeff White and John Overby of Spokane-based Ignite Northwest say they have noticed as well. Whereas Coeur d’Alene has a lot of manufacturing startups, White notes that a lot of startups in Spokane tend to involve life sciences, which he attributes to the high degree of medical research in the area.

Ignite Northwest offers incubator and accelerator classes to entrepreneurs and works with tech companies to prepare them for running a business or helping them find a viable business idea. White says Ignite Northwest is currently in discussion with NIC about offering its classes at the new Venture Academy.

The overall goal, says White, is to bring in new investments and industry to the region and help create jobs.

Alvarado says he has similar goals in mind and currently is expanding Continuous Composites into the former train depot warehouse next door, where the company plans to install larger versions of their 3D fiber printing machine to allow for larger components to be manufactured.

Alvarado says he has already hired three new employees and expects to grow from 25 current employees to roughly 40 by the end of the year. The company is also preparing to start a new round of funding later this Spring.

“It’s just been such an explosion over the last two years, but what we realize is so much of the stuff was there, just people were in their garages, they were all over the place, but now they have a place to go,” says Thrasher. “If you run up the street we’re on you have Ryan and the campus, and a couple blocks away you have Tyler and his group and they’re putting together a mini campus for their company, and we’re starting to have this entrepreneurship/innovation corridor that has sprung up in downtown Coeur d’Alene. It’s very exciting.”

Alvarado says he and his partner, John Swallow, own Coeur d’Alene-based McAllister Technical Services and Woodhawk Manufacturing, both of which are located at 1124 E. Sherman. Swallow also is the CEO and shareholder of New Jersey Mining Co. , which is at 201 N. Third, next door to Continuous Composites, in the former train depot that Alvardo and Swallow purchased and renovated into offices.

He says they also helped a former employee get his own company up and running, Iverson Iron LLC, a custom metal fabrication company, with which they regularly contract. Alvarado says Iverson Iron is currently working on some custom designs for Continuous Composites’ new warehouse.

Ryan Arnold, director of regional entrepreneurial strategy at NIC, says the Venture Center will offer classes focused on intellectual property and commercialization and will house a rapid prototype lab where entrepreneurs can create product prototypes before pitching to investors.

The space is intended to fill a gap in the community and create a space for small businesses, says Arnold, as currently there isn’t a dedicated place for individuals to do so. It also will allow businesses to come in and use the lab and engage with students.

The roughly 13,000 square feet of space is expected to be equipped with a metal 3D printer, plastic injection molding equipment, and a Five-Access Water Jet machine, which is a high-pressurized water jet to cut components to fabricate parts, says Arnold.

Over the past year, the Hedlund Building, located on the northern end of the NIC Coeur d’Alene campus near the corner of North Hubbard Street and East Rosenberry Drive, has become home to the Small Business Development Center, the Avista Center for Entrepreneurship, Gizmo-CdA, a new computer science program, an Emerging Media Arts Lab, and now, the Venture Center with its Rapid Prototype Lab and Venture Academy, which are expected to open in Spring 2020. Altogether, those create what Arnold calls the Venture Network.

The Hedlund Building was formerly used as the vocational technical program building, which moved to Rathdrum and left open bay spaces and classrooms that Arnold says are a perfect fit for a prototype lab.

The Emerging Media Arts Lab was born last year from a partnership between makerspace nonprofit Gizmo-CdA, NIC, and the University of Idaho as a place where students and community members can explore augmented and virtual reality using the latest technology.

Arnold says the University of Idaho has been a big partner in helping to develop such resources on campus and expects the collaboration between the university and the college to grow as more programs and plans are created.

He says a membership fee that will be associated with using the center also will give members access to the Gizmo space as well.

Students K-12 can work with Gizmo, which offers workshops in art, design, technology, and tools. Barbara Mueller, who owns Gizmo with her husband, Marty, says roughly 60 students use the lab a day, and over 400 people come through a week.

Arnold says, “(Gizmo), through a long process with NIC before I got here, came to a partnership agreement, and for the college it’s an awesome opportunity for us to have a stronger community touchpoint.”

Entrepreneurs with business ideas can work with the Avista Center, which currently has 146 NIC students and dual credit high school students enrolled for the 2018-2019 school year. Enrolled students learn the basics of entrepreneurship and leave with an Entrepreneurship Certificate.

“The past president (of NIC) and this one really wanted to grow entrepreneurship, and they also wanted to have a place that really focused as sort of a community hub and an educational hub to help entrepreneurs and small businesses grow,” Arnold says of the Venture Network.

In the community, places like the Innovation Den offer another space for entrepreneurs to network and workshop business ideas.

Thrasher also says, with the recent influx of retirees to Coeur d’Alene, that the area will continue to see a boost in investment and mentorship.

“One thing we learned early on is, there is clearly a lot more bandwidth here than people realize, there were already people who retired or had second home here, it was just getting them engaged,” says Thrasher. “My hope is certainly that we’ll be able to get them engaged with their experience and expertise. It’s very satisfying to invest and help people locally.”

Thrasher contends that few people who retire want to sit around.

“It’s not just the finance, but it’s the experience … they do want to contribute. I think it will be a major impact as more and more people come here.”