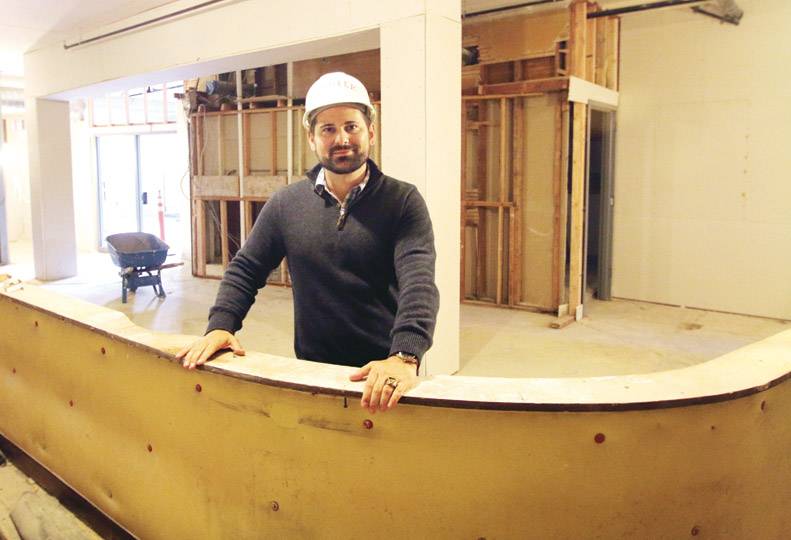 -—Mike McLean
Innovation Collective CEO Nick Smoot stands at the Lair bar of the Innovation Den, which will be an entrepreneurial center in the old Elks Building in downtown Coeur d’Alene.

After a few years convincing business, entrepreneurial, and community leaders of the importance of working collaboratively to shape the future of work in Coeur d’Alene and surrounding communities, the Innovation Collective is preparing to settle into its own entrepreneurial environment in downtown Coeur d’Alene.

They’re investing another $1.2 million to convert the building into the Innovation Den, an office building that also will include a coffee shop, gathering space for public events, and a private bar.

Renovations are expected to be completed in time for Innovation Collective to hold its quarterly summit there June 2 through June 4.

Tenants also are lining up for space in the 34,000-square-foot, three-story Innovation Den, which will have around 50 offices of various sizes, Smoot says.

“We’ve got about 30 leases on the building, so it’s moving very fast,” he says.

One charter tenant will be Lee & Hayes PLLC, a Spokane-based intellectual property law firm, which will open a Coeur d’Alene office there.

Other tenants will include a robotics company, a venture capital firm, and multiple design companies, Smoot says.

“It’s a big building, so it really does make it hard to figure out what do you do with it,” he says. “But we’ve been building Innovation Collective for about three years, so we have a bunch of tenants and people who want to be in the building together.”

The collective’s mission is to educate and inspire people to participate in entrepreneurship and the innovation economy, Smoot says.

“Each year, we’re seeing about 4,000 people through different events we do,” he says.

By some estimates, more than 40 percent of jobs we know today will be gone in 20 years, he contends.

While that might sound frightening, communities like Coeur d’Alene and Post Falls should see it as an opportunity to absorb some of those jobs rather than lose them, he asserts.

Membership in ICLN is $800 a year and includes workshops and educational materials, discussions with business executives, and networking opportunities.

“We have quarterly summits in which we bring in entrepreneurs from around the world,” he says. “ICLN members can attend those at no cost and can bring a guest with them.”

Galan is past president of the U.S. television network Telemundo and an advocate for Latino and women entrepreneurs.

“The two of them will come here and host education sessions on entrepreneurship,” Smoot says, adding that the summit will include time for socializing and networking.

“We’ll have breakfast together, and there will be late nights and cocktail hours,” he says. “It will be like an entrepreneurship camp for adults.”

The collective’s forth annual Think Big Festival will be Aug. 4 and 5. It will focus on recent developments and the future of robotics and artificial intelligence. The festival will include representatives of Microsoft Corp., Boeing Co., and Johns Hopkins University Applied Physics Laboratory.

Smoot, a Coeur d’Alene native who has lived on both U.S. coasts, says he has launched and sold three tech companies.

“None of them were billion dollar exits,” he says. “But I did well.”

As a tech entrepreneur, he says has built a network of innovators across the country.

The Innovation Collective currently is based at 410 E. Sherman, but soon will move to the Elks Building on the next block north.

The building will be set up so that entrepreneurs and startups can progress into the Innovation Den in stages, Smoot says.

The main-floor coffee shop, which will be open to the public, will be a place for anyone to share in the entrepreneurial environment, he says.

The building will have a mix of collaboration space that tenants can rent monthly for a base to bring in their laptop or mobile office equipment to work around other innovators, Smoot says.

The building also will have a number of small individual offices for one or two people, and five larger office suites, which each will accommodate up to 15 people.

“There’s really a progression here, starting with free space to come in and hang out,” he says. “A young startup might want to use co-working space, or a mature company might want larger offices.”

Tenants will have access to lounges and standing desks, three conference rooms, and other shared amenities,

The basement will be home to the Lair, a private club that will feature liquor lockers and ’40s-era bar furnishings and equipment.

“Folks can have a private high-end bar downtown that’s theirs,” Smoot says.

Club membership will be $100 per month for 24-hour access to the Lair.

The venerable structure will retain some of its historic look.

The floors are being refinished with two semi-trailer loads of red fir.

“We had them stained and beat them up so it makes it look like they’ve been in the building,” he says.

Ginno Construction, of Coeur d’Alene, is the contractor on the project, and Spokane-based Hurtado Hissong Design Group LLC designed it.

The building also will accommodate advanced communications and office technology.

One wall will serve as a 20-foot-by-11-foot laser projection screen for large-group presentations and entertainment. For free events, such as the Fireside Chats, interior “barn door” walls to the coffee shop will roll aside to expand the event space.

Smoot says it was sad to see the building was vacant for so long, but, now, it’s coming back to life.

“Originally, it was a place where people would get together and talk about important things,” he says. “Now, it’s coming back to the kind of place where we host these conversations, and we have the economy growing here.”