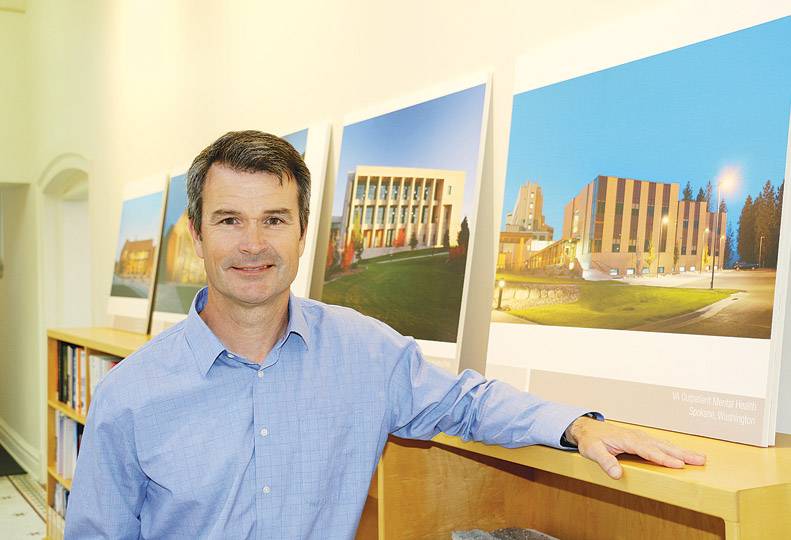 Integrus Architecture PS, of Spokane, is keeping a strong focus on public works projects, particularly those for higher education facilities. The firm is looking to build on its design expertise even as it faces a shortage of skilled architects to add to its team.

Company President Mark Dailey says the firm expects to expand its staff, which includes about 104 people, with half of those being located at its Seattle location and the other half located at the company’s headquarters here at 10 S. Cedar. Twelve of the firm’s employees here are licensed architects, an additional ten are architectural interns, and two more are project managers with architectural degrees.

Having served on the architectural advisory council for Montana State University, Dailey says he has noticed a drop in enrollment in architectural programs over the last few years.

“Following the recession, those programs and classes didn’t fill, so now there’s a bit of a shortage,” says Dailey. “While Integrus isn’t looking to hire a significant number of new staff, we have struggled to find qualified architect candidates.”

Despite the shortage of architects, Dailey says the firm has remained otherwise relatively unaffected by the Great Recession, due to the unique niche it serves.

“Our roots have always been in what we call public works projects, and that continues to be our focus today,” says Dailey. “We choose projects that reflect the company’s strategic strengths and hope to continue building expertise in the work we’re best at.”

“We were fortunate not to be as severely affected by the recession as many other architectural firms,” says Dailey. “We’ve seen some growth this year, with our net fees being higher this year than last.”

While the majority of the firm’s projects are in the Pacific Northwest, it also has worked on design projects in 28 states and territories, as well as on projects internationally, including the design of 14 U.S. embassies.

Dailey says that since the late 1970s, Integrus has been involved in several fast-track projects in the public sector that use both traditional design-bid-build, as well as alternative delivery methods. Those alternative methods include design-build, general contractor/construction manager, and most recently public-private partnerships.

Integrus is currently working on some of its first public-private partnership projects.

“Each project depends on the owner, architect, and contractor, and schedules vary,” says Dailey. “On all projects we work as the architect and engineer, but some just involve a different degree of working together.”

Dailey says a majority of the firm’s work is on education-related projects, with the Spokane office seeing a lot of higher education projects as well as a mix from the other categories, while most of the Seattle office’s projects are K-12 schools.

Dailey says because of the firm’s expertise, a high percentage of its projects involve work for established clients.

“We do some design work for private companies, but we don’t do any retail or commercial work. We’re kind of on a unique wavelength because of the types of buildings we design,” he says. “In this kind of work, it’s all a question of expertise, developing relationships, and meeting the right qualifications for a project.”

Looking ahead, Dailey says he expects to see growth in all five areas of projects the company works in, but especially K-12 and higher education.

He says because higher education projects are dependent on school funding, as well as curriculum requirements, designs have to take those changing factors into account.

“I think we will start to see design plans being affected more and more by changes in technology, as well as how people interact with the environment around them,” he says. “This evolution of technology and how it’s affecting design is exciting to see.”

Dailey says that often people don’t realize the full impact of a design until they’re inside a space, actively using it. He says another design trend the company has noticed has been within its work on justice projects.

While most of Integrus’ work focuses on the Pacific Northwest, Dailey says its overseas work also is significant. He says the firm began its international work with the design of the U.S. embassy in Bogotá Colombia in 1995.

“The international projects started as an opportunity through one of the founding partner’s business relationships. Overall, these projects are the result of the firm’s background in justice work, ability to build secure environments, and our design reputation,” says Dailey.

Integrus has served as the architect of record for 14 different U.S. embassy projects and currently is working on embassy projects in Ashgabat, Turkmenistan, in Eastern Europe; Nouakchott, Mauritania, in Africa; and Kabul, Afghanistan, in the Middle East.

Integrus was founded in 1953 by Bruce Walker and John McGough. Over the years, the firm has changed its name from Walker McGough, to Walker McGough Foltz Lyerla PS, before finally becoming Integrus Architecture in 1991.

The firm now is led by Dailey, CEO Brian Carter, and Chairman Larry Hurlbert, along with four other principals.

“We work hard at creating simple, functional, and artful buildings for our clients and owners, and it is very rewarding when our building users are excited as well,” says Dailey.