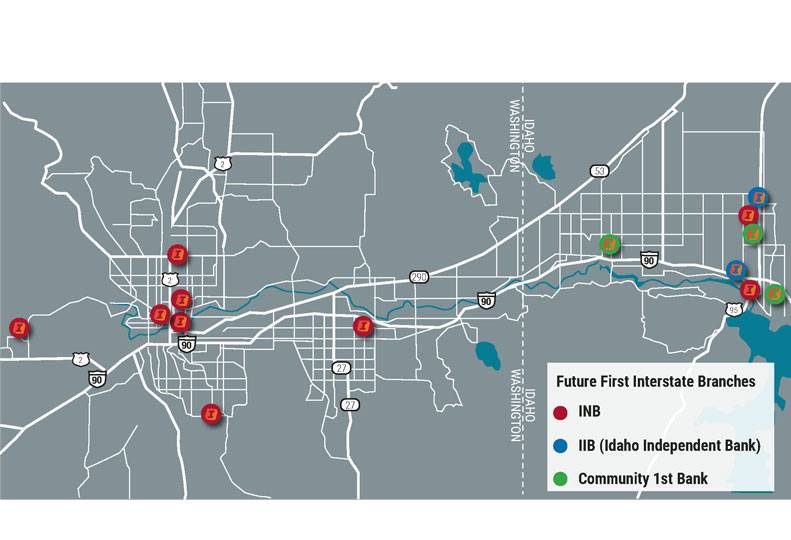 In a matter of months, First Interstate BancSystem Inc. will go from having no presence to a prominent foothold in the Inland Northwest banking community.

Kevin Riley, CEO of First Interstate, says the company hadn’t planned to acquire three banks in rapid succession, but ultimately, it jumped at the chance to do so.

“We don’t control the timing, as the buyer. If we were able to pick the exact timing of when we do acquisitions, we probably would spread them out at a more comfortable rate,” Riley says. “There’s a scarcity of good financial institutions, so we have to purchase them when they’re available.”

Not long after wrapping up its INB purchase, First Interstate announced on the same day, Oct. 11, it had agreed to acquire both Hayden-based Idaho Independent Bank and Post Falls-based Community First Bank in separate transactions valued at $181.3 million and $21.5 million, respectively. Both acquisitions have been approved by the boards of each institution; pending regulatory and shareholder approval, the acquisitions are expected to be completed in the second quarter of 2019.

According to the Journal’s most recent list of banks, published April 12, INB had $480.7 million in deposits in Spokane and Kootenai counties; Idaho Independent had $173.2 in local deposits, and Community 1st had $109.7 million, as of the end of 2017. The three combined had total local deposits of $763.6 million, which would have put First Interstate fifth on the list. Wells Fargo Bank ranked fourth, with $1.2 billion in local deposits, and JPMorgan Chase was sixth, with $710.6 million. The top three, in order, were Washington Trust Bank, Bank of America, and U.S. Bank.

Riley says each of the three banks First Interstate is acquiring has community-centered values similar to those of First Interstate, which was a major factor in the decision to acquire each bank.

“Their strategic direction of the bank, their culture, just the way they do banking is very similar to us,” Riley says. “Even though we’re bigger, we really try to operate as a small community bank.”

“Coeur d’Alene and Spokane and Boise are some of the fastest-growing economies in the Northwest, and we wanted to be part of that,” Riley says.

Riley says the acquisitions will make First Interstate the third-largest bank in Idaho’s Ada County and fourth in Kootenai County.

In a conference call held Oct. 25, First Interstate announced third-quarter net income of $41.4 million, or 71 cents a share. As of that date, the bank had assets totaling $13.3 billion.

“We’ll be able to give the customers an expanded product set,” he says. “We’ll be operating (those branches) the same way with pretty much the same people. The clients should only see enhanced services to what they’re already enjoying with the employees they’re already dealing with.”

Sara Becker, a spokeswoman for the bank, says the expanded products to be offered by First Interstate will include access to retirement and investment services, enhanced online and mobile banking services, and a credit card that includes rewards from local merchants.

Riley says First Interstate is committed to philanthropic efforts within the communities it serves.

“We are big in being part of the community and giving back,” Riley says. “We give 2 percent of our pretax earnings back into the communities philanthropically.”

Riley says the stock market responded well to news of the acquisitions.

“From Sept. 18, our stock has increased in value to a total shareholder return of 20 percent,” Riley claims.

Not counting Inland Northwest Bank or the two North Idaho banks it’s agreed to acquire, First Interstate has more than 120 branches in Washington, Idaho, Montana, Oregon, South Dakota, and Wyoming. With the acquisitions, First Interstate will have a total of 147 branches initially, Becker says. Because there are a number of markets in which First Interstate and the others have offices near one another, some branches will close. Becker says the bank expects to decide which branches it will close within the next few months.

Idaho Independent Bank, established in 1993 in Hayden, has one branch in Coeur d’Alene, one in Hayden, three in Boise, and six in Boise-area towns. The bank reported third-quarter net income of $2.2 million, or 29 cents per diluted share, an increase of 57.1 percent from the year-earlier period.

Community 1st Bank was established in 2007, in Post Falls, where it has one branch in addition to its two Coeur d’Alene branches. For the second quarter of 2018, Community 1st reported net income of $277,100, or 23 cents a diluted share, a 54.3 percent increase from the year-earlier period.