INW is tops in home affordability 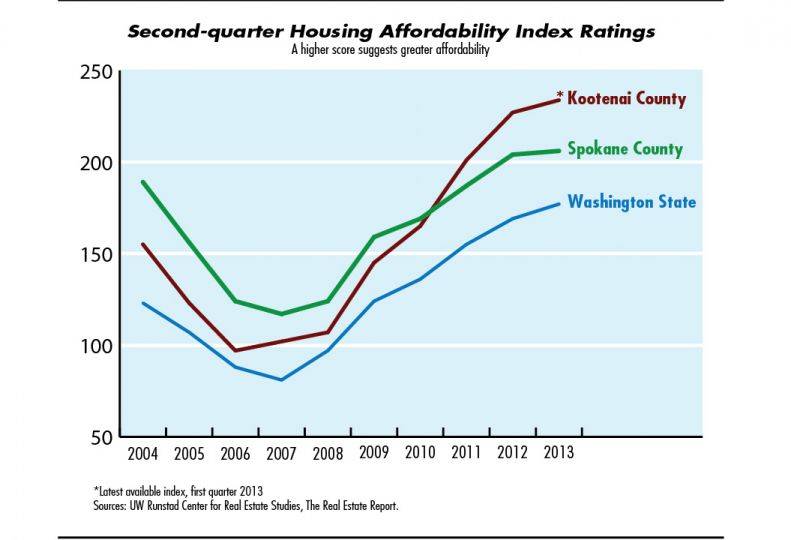 In results Crellin recently compiled for the second quarter of 2013, Spokane County scored an affordability index rating of 206, the Spokane market's highest second-quarter rating since 2003, when the county scored 208 in the index before the last boom-and-bust housing cycle.

The affordability index rating for neighboring Kootenai County, Idaho, also has reached record levels, says Crellin, who also is the director of the Washington State Center for Real Estate Research.

The affordability index is a measure of the ability of a typical family to buy a home; a higher index number indicates homeownership likely is more attainable for middle-income families.

Ratings over 100 indicate a typical middle-income level buyer likely would have more than enough income to qualify for a mortgage on a median-priced home. Ratings under 100 indicate a shortage of opportunities for such a family to buy a home.

"As challenging as it may have been, Spokane has had good affordability numbers all along," Crellin says of the protracted recovery from the Great Recession.

The Spokane County rating is consistently 20 or more points above the rating for Washington state as a whole.

Among metropolitan counties in the state, Spokane County for the last three quarters has edged above the perennial top scorer, Benton County, which had a second quarter index rating of 205. Crellin says Benton County includes most of the Tri-Cities area and scores consistently high ratings due to its high wage base, which is boosted by a preponderance of professional jobs linked to the Hanford Site, formerly known as the Hanford Nuclear Reservation.

By further comparison, King County, which includes Seattle and is the most populous county in Washington, consistently has the lowest rating among the state's metropolitan counties in the index. King County's second-quarter overall housing affordability index rating was 122. The statewide rating was 166.

Spokane County's affordability index rating has been trending upward from a 19-year low in the third quarter of 2007, when it dropped to a rating of 110 during the same year that annual median home sales prices peaked at $185,400, The Real Estate Report data show. By the end of 2011, when the median annual price fell to its post-recession low of $154,900, the index had risen to 207.

Rob Higgins, executive vice president of the Spokane Association of Realtors, says the Spokane market's rating on the affordability index is a selling point for economic development efforts.

"It's a real positive that we're rated high on the affordability index," Higgins says. "People can afford housing here more than other places, according to the index."

Through August this year, the median home sales price for homes sold through the association's Multiple Listing Service was $164,900, up from $158,500 in the year-earlier period.

"Prices here are increasing in the neighborhood of 4 percent a year," Higgins says, adding that such a gradual increase will help maintain a high affordability rating.

For the first eight months of the year, 3,658 homes were sold through the Spokane MLS, up 24 percent compared with the year-earlier period.

"As we come out of the recession, hopefully more first-time buyers will get into home ownership and start building equity," Higgins says. "That's a critical point for any family as they try to develop assets to use later in on in life."

Crellin says that Spokane County's affordability index not only rose when prices were declining, it continued to climb as home prices increased through the first quarter of this year.

"That's more related to the fact that interest rates were declining and there was some modest increase in incomes," he says. "As some people started coming back to work again, we began to see aggregate wages increasing."

The affordability rating here likely has topped out for the time being, Crellin says.

The second-quarter housing affordability index for Spokane County factored in annual family income of $63,300 and a mortgage interest rate of 3.65 percent.

"Interest rates went up about three-quarters of a percentage point in July and have been flat since then," he says. "I would expect the combination of a recovering home-price market and increasing mortgage rates is going to be enough to offset increases on the income side."

Steve White, president of Copper Basin Construction Inc., of Hayden, Idaho, says a third or more of the homes his company builds in Spokane and Kootenai counties are priced to compete with the resale market for middle-income buyers.

The company expanded into the Spokane market in 2009 and has built homes for the mid- and entry-level market in Liberty Lake, on Five Mile Prairie, and on the West Plains.

Copper Basin's sales this year are up about 25 percent from a year ago, although White questions whether homes are really more affordable this year than last.

"It was more affordable when interest was lower," he says, noting that rates are still well below historical levels.

Even as interest rates have edged upward, White says prospective homebuyers are gaining more confidence in the market recovery.

"I think more of them are coming off the fence," he says.

In the first eight months of the year, 464 newly constructed homes were sold through the Spokane MLS, up 59 percent from the year-earlier period.

Spokane County scored a second-quarter rating of 115 in the first-time buyers index, down from a rating of 128 in the first quarter, but still in the historically high range for the index.

The first time-buyers index had been below 80 for 14 consecutive quarters starting in the third quarter of 2003 and running through 2008, a period that spanned the heated housing market here, when home prices accelerated much faster than income. The first-time index has been above 100 here since the fourth quarter of 2011.

The statewide first-time buyers rating for the second quarter was 93.

In the last decade or so, Kootenai County typically had more challenges in serving median-income homebuyers because home prices tended to be higher compared with the Spokane market, Crellin says.

"Now, Kootenai County is looking more favorable, because prices took a bigger hit during the recession," he says.

Kim Cooper, real estate broker with Select Brokers LLC, of Coeur d'Alene, and spokesman for the Coeur d'Alene Association of Realtors, says the 2013 median sale price through August was $171,900, up 11 percent from the year-earlier period.

He adds that the number of homes sold through the Coeur d'Alene MLS so far this year is up 30 percent. "We have sold just over 400 more homes this year than last year at this time," he says.

The escalation in price appears to be slowing in recent months, which could help hold up the affordability index rating, he says.

"As long as interest rates stay static, we should be in good shape," Cooper says. "The current environment so far this year is good for the housing market."