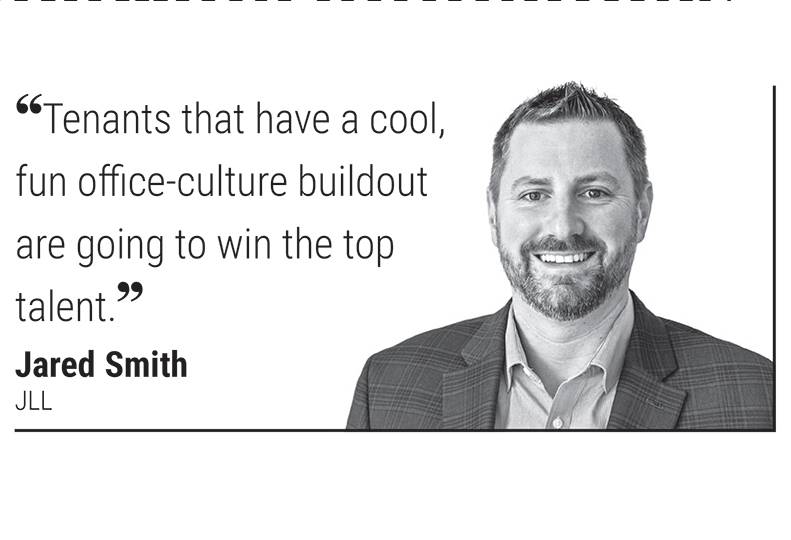 Jared Smith, senior associate with JLL, in Spokane, says employers who have invested in their workspaces are more attractive to prospective employees. According to JLL, 41% of job seekers base their decision on the physical space of a company.

“There’s such a war for talent right now, and (tenants are) so concerned about rent cost,” Smith says. “But if you look at it holistically, the tenants that have a cool, fun office-culture buildout are going to win the top talent, because they’re going to come in, they’re going to see the space, and it’s going to be a pride thing.”

Smith says one way to show companies how their space costs impact their bottom line is the 3-30-300 rule, which Smith claims JLL introduced about six years ago.

For each square foot of space it occupies, Smith says a company typically spends annually about $3 for utilities, $30 for rent—that’s closer to $25 in Spokane’s current market, Smith says—and $300 for payroll.

Using the 3-30-300 rule can help employers decide where to cut costs and where to invest in their spaces, Smith says.

“I run the process for prospects and smaller clients as well, so they understand how important and impactful a real estate decision can be, outside of just the rent impact on the bottom line,” Smith says.

For a company leasing 20,000 square feet of space for about 100 employees, about $6.2 million of its total annual occupancy cost goes toward employees, Smith says. Maintaining their comfort and well-being can boost morale and decrease attrition.

According to a 2013 World Green Building Council report, employers that provided spaces with more natural light experienced a productivity increase of 23%, while those which focused on improving ventilation saw employee productivity rise by 11%.

JLL uses the 3-30-300 rule for its own corporate spaces, Smith says, but that’s harder to do for offices of just two employees, as is the case with JLL’s Spokane office. Smith says JLL occupies about 500 square feet above the Indaba Coffee shop at 510 W. Riverside, downtown.

Michael Sharapata, managing director at the Spokane office of JLL, says some commercial landlords are wary of creating spaces that lease for more than the average local rate.

When he established a JLL office here in 2017, Sharapata says he heard from local real estate professionals that commercial rents hadn’t increased in decades.

“What that means is that there’s consolidation of the margin, and landlords aren’t going to be able to reinvest in their buildings and improve them,” Sharapata says.

Sharapata points to the Wonder Building as an example of a commercial space that’s bucking the commercial leasing price trend.

At the time construction began, Sharapata says the average commercial lease in Spokane was $18 per square foot.

“With Wonder, we took the approach of, we don’t have to compete with our neighbors,” Sharapata says. “We’re going to find out what the tenant wants, we’re going to build it, and we’re going to tell them what that costs. The first deal we did in there was over $26 a square foot. That was higher than anything else downtown.”

JLL continues to receive at least one phone call per week about the Wonder Building.

“If I had four Wonders, I’d fill them all,” Sharapata says of demand for the building.

Most of the buildings JLL handles in the downtown area are full, Sharapata claims.

As previously reported by the Journal, a fall 2021 market survey compiled by the Spokane Valley office of Valbridge Property Advisors Inc. showed office spaces in the downtown core at 17.3% vacancy. That survey involves 70 buildings with a total of 2.9 million square feet of floor space.

Finding sufficient space for companies that require larger offices is difficult in Spokane, Sharapata says. For example, it can be difficult to find an existing building that’s appropriate for a growing life sciences company, but finding land on which to develop a building can be just as tricky.

“Where do you develop it? How about at the airport? Well, the airport has lots of land, but they have lots of conditions,” Sharapata says. “You have all these smaller parcels that have a bunch of different contingencies. Kendall Yards, for example, you’re going to be spending $6 million for an acre there. Those are the things that keep us up at night.”