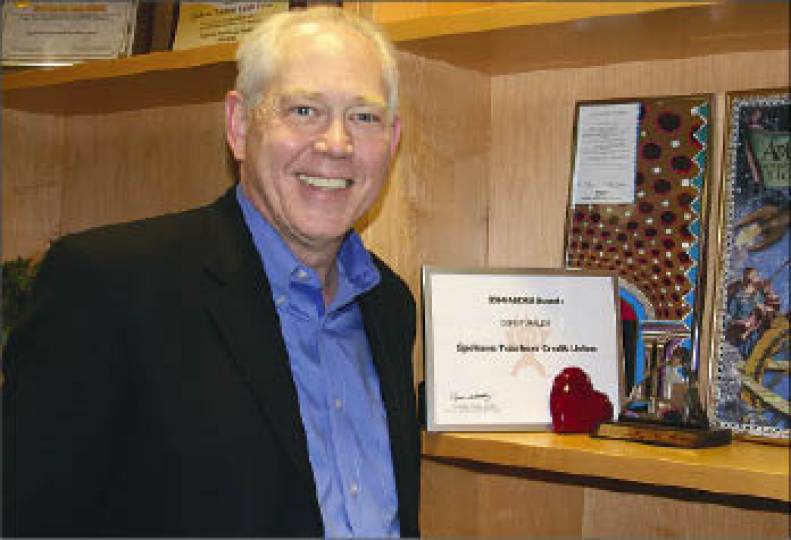 -—Staff photo by Jeanne Gustafson
Tom Johnson says his experience with STCU as a vice president and on its board has given him a lot of knowlege of the culture of the Spokane-based credit union.

Tom Johnson is preparing to take the reins of Liberty Lake-based Spokane Teachers Credit Union during a dynamic time in the financial institution's history.

The credit union's deposits grew 22 percent last year under the guidance of outgoing CEO Steve Dahlstrom, who will retire on Dec. 31. Johnson has been named executive vice president and will become president and CEO on Jan. 1.

That should continue to be a very active time for the credit union despite a slower rate of growth the institution expects this year, Johnson says. STCU is preparing to implement new software on both its online banking and in branch-banking systems, and is working to adapt to regulatory changes in the industry as well as help its members manage continuing economic challenges, he says.

"We've had a number of members who have had a difficult time," Johnson says, adding that the credit union has been offering a program to help its members restructure their loans when they are struggling to make payments.

With 88,000 members, 400 employees, and $1.4 billion in assets, STCU now is the third largest credit union in Washington state and the 101st largest in the country, Johnson says. Dahlstrom has worked at STCU since 1980, when the credit union had 10,000 members, and has been its president and CEO since 1991.

One of Johnson's first responsibilities in his interim role as executive vice president will be to fill his former position, of vice president of administration, he says. STCU has a history of hiring from within, and Johnson says several internal candidates are under consideration for that position, which he has held since 2006.

Johnson says some responsibilities of the position are similar in many ways to his work at Whitworth University, where he had served as a vice president from 1989 to 2006. For example, he has been supervising the human resources and training areas at STCU, a role he also played at the university here.

Johnson says he became connected to STCU while at Whitworth when he served on a search committee that ultimately selected Bill Robinson as president of the university in 1993. At that time he got to know Terry Wilson, a Whitworth alumna and current chief operating officer of STCU, who also served on the search committee. She suggested Johnson seek election to the credit union's board.

Johnson won the election and served on the board for 12 years. He says he got to know the culture and the organization well through that lens over his years of board service.

"I became a pretty big fan," he says. When he decided to make a career change, he talked with Dahlstrom, and they decided it would be a good fit for him to take a position at the credit union.

In his role as vice president, Johnson, among other responsibilities, has served as liaison to the board of directors, which helps set policy for the organization.

Johnson says he also has been overseeing regulatory compliance issues, which he says will be key this year and in coming years.

"In today's economy, that's a very active position," he says. "In 2009, we looked at the previous year, and there were six pieces of new regulatory revision or change." For 2010, he says, there are 28 such changes, and Congress is considering more. Meanwhile the credit union is working on complying with new rules, including, for example, a rule requiring that members opt in for what used to be automatic debit-card overdraft protection.

Right now, one of the big issues making its way through Congress is possible limitations on the fees institutions can charge businesses for debit-card transactions. Such fees are needed, Johnson asserts, because where businesses used to have to pay for companies to collect funds on bounced checks, that cost has been shifted to financial institutions now that consumers primarily use debit cards.

In addition to regulatory issues, Johnson says he's also actively involved in strategic planning for the credit union. He says that though the strategic planning committee does produce a five-year planning document, the 20-person committee meets monthly and evaluates how the institution needs to adapt to current and ever-changing conditions.

"Our principal focus is on the process" of planning, he says, which makes the document more dynamic than if it were looked at once a year and put on a shelf.

Johnson says STCU's long-term planning is guided by three core values: to grow its market share, to improve its customer service, and to be as efficient as possible.

He says that most of the changes coming for STCU are a result of the direction in which the credit union already has been heading, and he's happy with the course the institution took under Dahlstrom's guidance.

Even in the face of tough economic times, the credit union achieved rapid deposit growth last year, although Johnson anticipates that growth will slow to about12 percent this year, as the economy continues to struggle. The credit union has worked to help about 250 of its struggling members restructure debt, but Johnson says loan losses are at a high level that the institution has not seen in probably its entire history.

The credit union has pulled back on branch expansion to work on updating its core technology, including replacing its in-house computer systems, an update that should be completed around the first quarter of 2011, Johnson says.

This month, STCU will launch its updated Web site and online banking system, converting about half of its members' accounts to a new interface that Johnson says will give members more control over their accounts. The rest of the members will have their online banking shifted to the new system in July, he says. Of the credit union's 88,000 members, more than 50,000 currently use online banking services, Johnson says.

Though there are some incremental costs with the regulatory banking system changes, Johnson says STCU has not incurred huge expenses because of those shifts. STCU has been a pilot site for a new internal computer system being adapted for credit union use from a system that was designed for bank use, he says.

Once the technology updates are completed, the credit union will look at developing a new branch in Spokane Valley, at 13211 E. 32nd, where it bought property last year, Johnson says. It also has land in Airway Heights, at the intersection of U.S. 2 and Centre Way, for a future branch.

Johnson, now 59 years old, says he told STCU's board he plans to serve as president for between five and seven years, which he says will take him to retirement. A new grandfather just last month, Johnson says that at that time, he'll be ready to spend more time with his family.