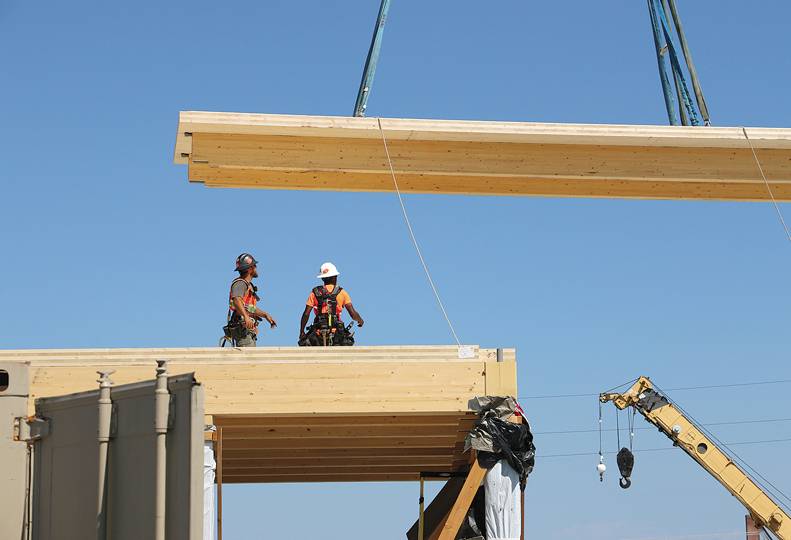 -Mike McLean
Workers guide a Katerra cross-laminated timber panel into position at the Catalyst project site on the south edge of the University District. 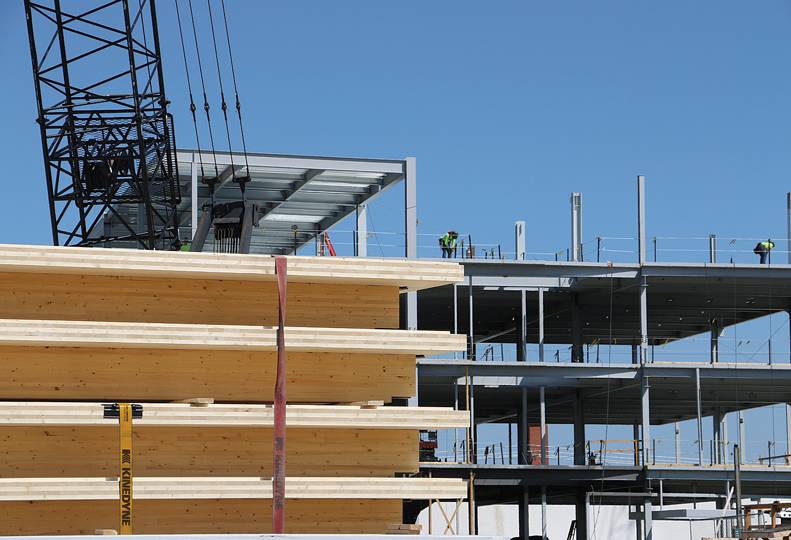 -Mike McLean
Katerra cross-laminated timber panels are delivered in the foreground for the Catalyst project, while ironworkers erect the HUB project in the background.

Meantime, the company also plans to move its Spokane offices to the north side of the Spokane River from its current downtown location.

Katerra’s 270,000-square-foot Valley manufacturing facility is dedicated solely to the manufacturing of CLT, a wood panel consisting of several layers of wood glued together at 90-degree angles to form sturdy structural panels.

“We continue to complete commissioning of the facility while concurrently beginning limited production,” Katerra spokeswoman JZ Rigney says. More than 500 panels will be used to create the building’s floors, Rigney says.

According to an update posted on Katerra’s website, its three-layer and five-layer cross-laminated timber panels completed product testing in early July at Cottage Grove, Wisconsin-based PFS-TECO Corp.’s testing laboratory. The panels, which primarily are used for floors, were tested for structural integrity, fire resistance, and acoustic performance.

Those panels were delivered Wednesday, July 24 to the site of the 159,000-square-foot Catalyst building currently under construction on the southern edge of Spokane’s University District, at 601 E. Riverside, Rigney says. More than 500 panels will be used as structural materials to create the building’s floors.

Construction crews broke ground on the $40 million Catalyst building last fall, and the project is expected to be completed in mid-2020. Katerra is the project contractor and designer.

Next to go through the testing and certification processes are seven-layer and nine-layer panels, including CLT shear wall panels to be used for lateral stability. Katerra claims the Valley CLT press is the largest in the world, with the capability to manufacture panels measuring 12 feet wide by 60 feet long.

The panels are created with spaces for windows and doors built in and can include pre-installed plumbing and electrical wiring. The wood for the panels is sourced from small-diameter trees that aren’t economical to be used for conventional lumber.

The company also claims that the Spokane Valley factory, which occupies 29 acres of a 52-acre parcel of land Katerra owns, will have the capacity to create more than 11 million square feet of floors and roofs, making it the largest capacity CLT facility in the U.S.

“Katerra’s CLT factory is the first high-volume production facility in the United States,” says Hans-Erik Blomgren, Katerra’s technical director of mass timber. “Our ability to supply a high-performance, quality product to projects nationwide is a significant advancement in changing the way we build with mass timber in North America.”

When Katerra’s Spokane Valley CLT manufacturing facility is fully staffed, it will employ about 150 people.

Separately from its CLT operations, the company is remodeling a space in the Wonder Building, at 821 W. Mallon on the north bank of the Spokane River, where it intends to move its Spokane office from its current location in the Numerica Building, at 502 W. Riverside, downtown.

According to building permits on file with the City of Spokane, Katerra is working to remodel 10,500 square feet of space on the first floor of the building. Katerra is acting as its own contractor and architect on the $778,000 remodeling project. Energy Control Inc. and Pennell Consulting Inc., both of Spokane, are providing plumbing and electrical work, respectively.