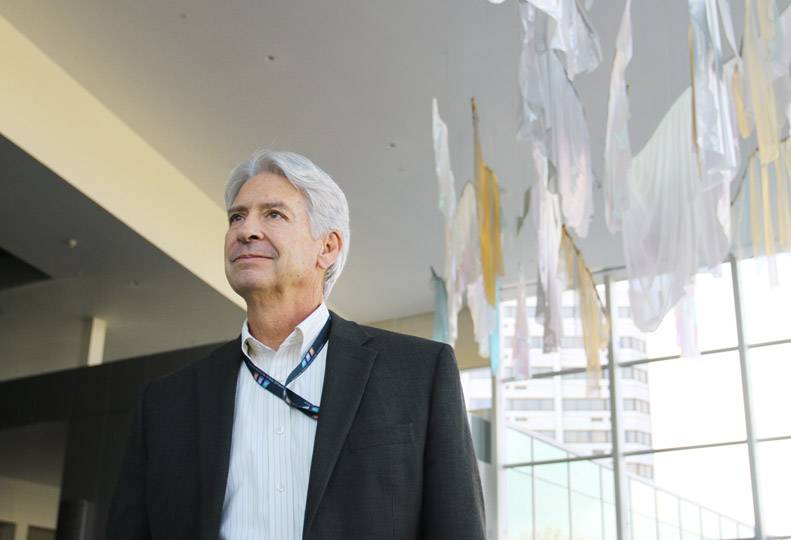 -—Kevin Blocker
Spokane Public Facilities District CEO Kevin Twohig is retiring from his position effective Feb. 1, 2018. He has led the district for the past 16 years.

Since Spokane Public Facilities District CEO Kevin Twohig publicly announced his retirement, more than a few people have taken it upon themselves to give him credit for changing Spokane’s skyline.

They’ve pointed to the fact that during his 16-year tenure as CEO, he’s helped to expand and improve the International Ag Trade Center, the Spokane Veterans Memorial Arena, the INB Performing Arts Center renovation, the Spokane Convention Center Exhibit Hall, and the convention center completion project.

Each time, Twohig says, he’s scoffed at the notion that somehow he’s been the one responsible for the projects completed by the PFD.

“These projects would’ve happened with or without me,” Twohig says. “But if it weren’t for those initiatives passed by Spokane residents (for those projects), then not much changes. The people of Spokane changed their skyline.”

Larry Soehren, chairman of the PFD board, however, asserts those who say Twohig helped change Spokane’s skyline perhaps aren’t giving him enough credit.

“The shoreline, they forgot to include the shoreline. He had a vision to change it,” Soehren says. “That part of the Centennial Trail down the by the convention center is a direct result of what he had in mind.”

He says it was Twohig’s idea to make that part of the Centennial Trail more conducive to foot and bicycle traffic, making it more palatable to recreational enthusiasts including families with young children.

“Yes, you can build buildings, but if they’re not compelling, then it’s just construction,” he says. “Kevin is a key person to having helped give birth to the current business climate in Spokane.”

Soehren credits Twohig for helping the facilities district develop a vision for those major projects and then articulating them to the public to persuade Spokane voters to approve them.

In 2008, the PFD bought 2.75 acres of property across Spokane Falls Boulevard from the INB Performing Arts Center for $7 million and five years later sold it to Spokane developer and hotelier Walt Worthy, who eventually built the Davenport Grand Hotel there. Under the terms reached with the PFD, the Worthys committed 300 of the new parking spaces for INB and Convention Center patrons. The PFD paid for a skywalk over Spokane Falls Boulevard linking the Convention Center and the new hotel.

Spokane developer and PFD board member Mick McDowell says Twohig’s legacy extends beyond his tenure as CEO. It dates back to his efforts as a city employee and when he participated in Expo ’74.

“He was very instrumental in helping Spokane move the PFD from its roots as a city bureaucracy to an entity that is now creative, economical, and entrepreneurial in the way it operates,” McDowell says.

He adds, “Kevin has a staff that is allowed to be all of those things. Look at the success of Garth Brooks this past week. Kevin is leaving behind a phenomenal legacy.”

The Spokane Public Facilities District announced at the end of October it named Stephanie Curran, the current general manager of the Spokane Convention Center, to replace Twohig as the PFD’s CEO on Feb. 1. Curran has held her current position since 2015.

The PFD hired Brentwood, Tenn.-based Venue Solutions Group to lead a national search process to fill the position. Curran, a PFD employee since 2003, has served in roles including event supervisor and assistant general manager of the convention center and INB.

“We’re excited to have Stephanie step into this role,” Soehren says. “She’s been committed to the district for many years and has demonstrated her excellent ability to lead our exceptional facilities like the INB and Spokane Convention Center.”

Says Twohig of Curran: “I’m very pleased to see Stephanie emerge as the successful candidate from what was an extensive national search process. I have great confidence in her ability to lead the district.”

Twohig, who’s 68, graduated from Brophy College Preparatory high school, in Phoenix, in 1967. A product of a Jesuit education, Twohig owns the distinction of being the first Brophy Prep grad to attend Gonzaga University, where he earned his undergraduate degree in business administration in 1971.

After graduating college, Twohig owned and operated a sound, lighting, and production company that eventually provided services for Expo ’74. At its conclusion, Twohig accepted a position with the Spokane Opera House and says he’s been responsible for operating public facilities in Spokane ever since.

As CEO, his responsibilities include marketing, sales, maintenance, and operations of the arena, convention center, and the INB—all of which make up the PFD. The three facilities average a combined 800 events per year with more than 1 million attendees annually.

Twohig says he believes it’s important for managers within the PFD to provide solid training and feedback to staff and allow them to flourish in their jobs.

“If employees are properly trained and invested in what they’re doing, then that allows us to be able to think about where we want to be in five, 10 and 20 years from now,” he says.

The Spokane PFD has a total of 45 employees. For large-scale events, the PFD hires private contractors for custodial positions and stage hands among several others, Twohig says.

“Our board is five business people who like things that work,” Twohig says. “We’ve been successful and that’s been in large part because of the support of the board.”

Twohig won’t be a complete stranger to the PFD after stepping down as CEO. He will serve as a consultant for the PFD for the scheduled renovation of the INB, which is set to start in mid-2018.

Twohig says he hasn’t thought much about his past work as CEO of the PFD and doesn’t plan to after he retires.

He and his wife, Barbara Twohig, have a home in Medical Lake, one on Spokane’s South Hill, and another in Phoenix.

“At least initially, I know there’s going to be a lot of time and energy centered on projects involving those,” Twohig says.