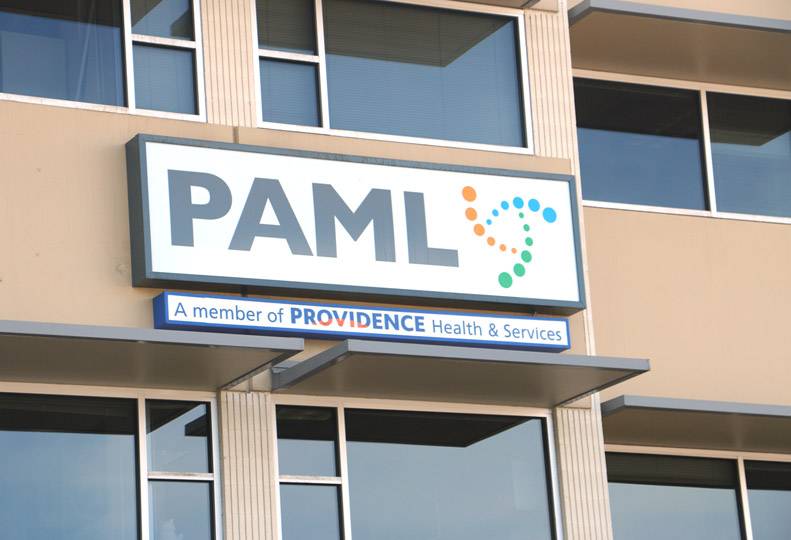 Donald R. Von Hagen, vice president of corporate communications for LabCorp, disclosed those intentions in recent voicemail and email exchanges with the Journal, saying the company “very much understands the historic role and importance that PAML has played in the greater Spokane area.”

What remains unclear for now, though, is exactly how permanent that regional lab emphasis here will be and how other looming changes still being worked out for the PAML operation here will affect the size of its workforce. The possibility that LabCorp might move PAML’s functions out of Spokane, entirely or partially, has been a concern among economic development leaders here.

“We continue to evaluate the services that will be performed in Spokane,” Von Hagen said in an email response to phone and email queries from the Journal seeking an update on plans for PAML. “While that will result in some functions being scaled back or relocated to other locations over time, we also expect that other functions will move to or be increased in Spokane.”

As one example of the latter, he mentioned the company’s plans to make Spokane the site of its primary western U.S. workplace and toxicology testing lab.

“Now that PAML is a LabCorp company, we remain committed to Spokane and the other communities that PAML and its joint ventures serve,” Von Hagen said.

PAML ranked 23rd on a Largest Spokane County Employers list the Journal published last November, with more than 800 full-time equivalent employees in the county and nearly 700 more located elsewhere. Its total employee count as of Nov. 1 was up by more than 100 workers from a year earlier.

The local effort to pitch King on the benefits of keeping the PAML operation here appears to have made a lasting positive effect. In Von Hagen’s email message to the Journal, he said, “Over the past few months, we have appreciated the chance to develop a closer relationship with Mayor Condon and other business, civic, community, and academic leaders and institutions in the greater Spokane area, and we look forward to building on that in the future.”

LabCorp didn’t comment specifically on the future of the operation here in a press release issued May 4 about completing the PAML acquisition, other than to say there would be no significant changes to operations or services here until all joint venture transactions are completed.

In acquiring PAML from former joint owners Providence Health & Services and Catholic Health Initiatives, LabCorp assumed PAML’s ownership interests in a number of joint ventures, which collectively serve customers in six Western states and Kentucky. Those joint ventures include PACLAB Network Laboratories and Tri-Cities Laboratory, both based in Washington state; Colorado Laboratory Services, based in Lakewood, Colo.; MountainStar Clinical Laboratories, based in Salt Lake City; and Kentucky Laboratory Services, based in Lexington. In addition, PAML, as a LabCorp subsidiary, has acquired certain assets of Alpha Medical Laboratories, a former PAML-affiliated joint venture with Coeur d’Alene-based Kootenai Health, from its hospital owner.

LabCorp said in the May 4 press release that the acquisition of PAML represented just the first step in completing the overall transaction. Through the rest of this year and into 2018, it said, it will acquire the ownership interests in three of those five joint ventures from their hospital co-owners. It said the hospital partners in Tri-Cities Laboratory and MountainStar Clinical Laboratories are evaluating future options for their interests in those joint ventures, which might include a sale to LabCorp.

It said there will be no significant changes to operations or services at PAML until all joint venture transactions have been completed.

PAML, which turned 60 this year, maintains corporate headquarters at 629 N. Iron Court on the Iron Bridge Office Campus here. Its main laboratory is located at 110 W. Cliff Drive on the South Hill. It also operates a number of patient service centers in Washington, Idaho, Oregon, and Montana.

LabCorp, which operates one of the largest clinical laboratory networks in the world, says on its website that it processes tests on about 500,000 specimens a day. It employs more than 50,000 people in 60 countries and reported revenue of about $9.5 billion last year.