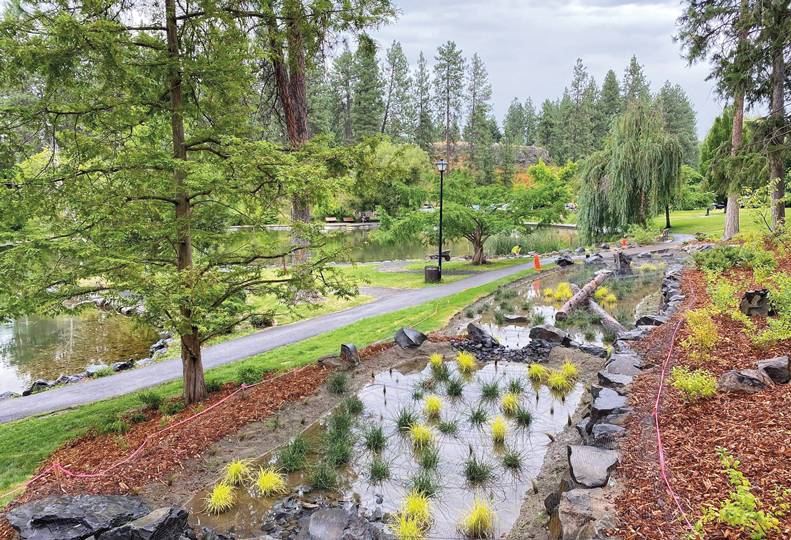 AHBL Inc., a pioneer of the green infrastructure adoption in Spokane County, has seen expansive growth in recent years, and a company official says it’s on track to see its strongest year ever.

The company has championed low-impact development techniques, which have grown in popularity in Eastern Washington since the early 1990s.

AHBL entered the Spokane market in 2008, says Craig Andersen, director of landscape architecture, who joined the company in 2011.

“I was drawn to AHBL because we have a strong focus on sustainable design and innovative design strategies, and a real focus on our clients,” Andersen says.

Low-impact development, or green infrastructure, is a land-use planning and engineering design method of managing stormwater runoff that imitates the natural world, according to the U.S. Environmental Protection Agency.

“Finding more sustainable low-impact strategies for stormwater management is something that is a focus for the firm, and really has that benefit when we combine civil engineering and landscape architecture together,” he says.

“We’ve actually seen it embraced a lot in the Spokane region,” Andersen says. “When I started with the firm almost 10 years ago, it was just an emerging strategy in Spokane. It seems like now it’s almost become more ubiquitous in projects.”

Low-impact developments were first adopted by the city and county, followed by more widespread implementation by private developers, says Andersen.

“I think it takes an entity like the city or the county to make the test and sort of prove that it works, and then you start seeing that trickle down into other public agencies,” he contends.

The company has seen substantial growth in demand and is expecting 2020 to be its busiest year on record, he says.

“We had thought that last year was (our) busiest year,” Andersen claims. “But even with COVID we’re a bit busier than we were last year.”

Within the last two years, the company has expanded its office space at 827 W. First, in downtown Spokane, to accommodate continued growth and to create the ability to distance employees in light of the COVID-19 pandemic.

Nine employees currently are based at the company’s Spokane office, and AHBL has more than 140 employees companywide. The company also has offices in Seattle and Tri-Cities.

Andersen says he expects the Spokane office to expand should the company stay on its growth pattern of the last five years.

AHBL is looking to add up to three employees here next year — one landscape employee, and one or two civil engineers, he says.

Recent projects include the $70 million, 135,000-square foot Shaw Middle School replacement on the 4100-block of North Cook Street, the nearby alternative high school On Track Academy, and the Hillyard branch of Spokane Public Library.

The company also is working on a project for Wenatchee Valley College, and multifamily projects such as a 20-unit, $1.6 million apartment complex being developed in Coeur d’Alene by Hayden-based Whitewater Creek Inc.

The Spokane office primarily serves Eastern Washington and North Idaho. It also is working currently on some government projects in India, Africa, and Europe, he says.

Additionally, the company has branched more into specialty commercial projects with boutique architects. One such project is the design of a brewery, he says.

AHBL’s projects are evenly split between the public and private sectors, Andersen says.

Looking forward, Andersen says he’s optimistic about the current state of the construction market in Spokane.

Budget shortages likely will slow public projects, but Andersen says he remains hopeful that public work will continue to be strong.

“There’s still enough population pressure from the coast moving into the Spokane area that housing and multifamily housing seem like they’ll still be strong.”