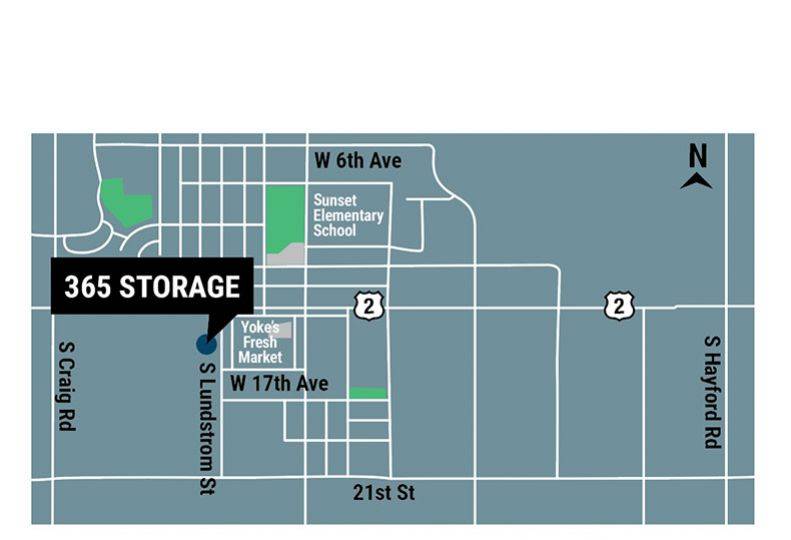 A new 100,000-square-foot storage facility is planned on the West Plains, at 1722 S. Lundstrom, in Airway Heights, an environmental application on file with the state of Washington shows.

The project, dubbed 365 Storage, will be located on 7 acres of land zoned for commercial uses, situated within a highway corridor zone.

The site is two blocks south of U.S. 2 and about 2.5 miles east of Fairchild Air Force Base in an area surrounded by commercial, industrial, and vacant land.

The storage facility will have about 300 enclosed storage units in several structures, environmental documents indicate. Buildings will range in size between 7,000 square feet and 20,000 square feet.

Construction costs aren’t available on the environmental application. For comparison, the Journal reported in 2020 that an 83,000-square-foot storage facility was valued at about $5.5 million in Spokane Valley.

A conditional-use permit application has been submitted to the city of Airway Heights for the development. No building permit has been filed yet.

Construction is scheduled to occur in three phases over 10 years, plans show. If permitting is approved, the first phase of the storage development is expected to be completed next April.

A portion of the land, that comprises about 1.3 acres of the property, was previously used as an outdoor cannabis farm with multiple greenhouses, engineering documents show, although no permanent structures currently are on the site.

A traffic study conducted by Spokane-based TD&H Engineering indicates the development isn’t expected to affect traffic on nearby arterials.

Wyoming-based real estate company LLM LLC, which owns the property, purchased the land in April for $495,000, according to Spokane County Assessor’s Office records. A representative of LLM couldn’t be reached immediately for comment.

Information provided by the applicant states that the storage facility project is expected to help meet the increased demand for storage in the area due to a growing population in Airway Heights from new apartment and single-family housing developments.

•A 22-unit multifamily apartment building is being developed at 702 W. Hastings Road, in North Spokane, according to permit information on file with Spokane County.

The apartment project is valued at $1.7 million.

Construction plans call for a 17,300-square-foot structure on about a half-acre of land.

Bouten Construction Co., of Spokane, is the contractor for the project, and Spokane-based Trek Architecture is designing it, permit records show.

The apartments will be located north of the Fairwood Shopping Center and west of Mead High School.

Representatives of the development couldn’t be reached immediately for comment.

•In Hayden, a new 8,600-square-foot office and storage building is planned at 8512 N. Wayne Drive, by Coeur d’Alene-based Leviathan LLLP, permit information on file with the city of Hayden states.

Shorewood Homes LLC, of Hayden, is the contractor on the project, and Miller Stauffer Architects PA, of Coeur d’Alene, is designing it, according to permit information.

The project site is about one mile north of Silver Lake Mall and a few blocks east of U.S. 95.

Scout Distribution was established in 2018 and is headquartered in San Diego. The company serves San Diego, Orange County, Los Angeles, and the states of Idaho and Arizona, according to its website.