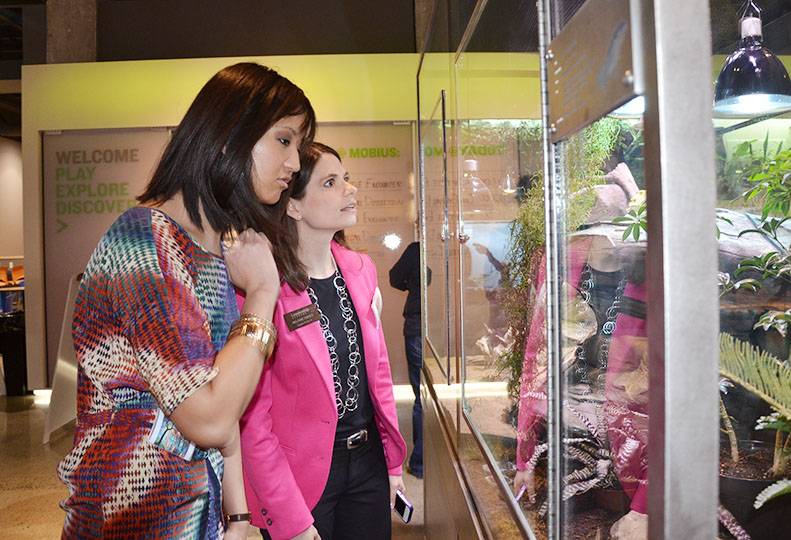 -—Judith Spitzer
Bailee Neyland, left, of Gonzaga University, and Melanie Fisher, of Inland Northwest Blood Center, check out a gecko between classes at the Mobius Science Center in downtown Spokane. 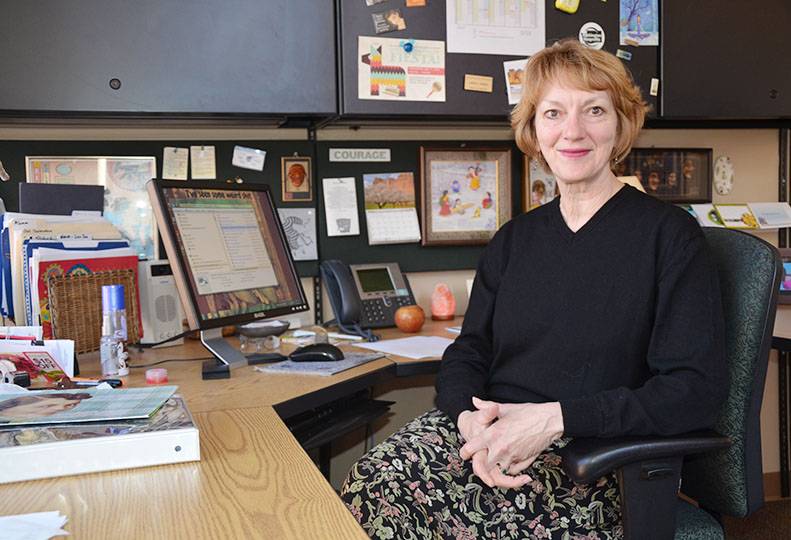 -—Judith Spitzer
Finney says she is proud of Spokane leaders for committing to leadership and investments they’ve made in business with the future in mind. “It really gives people the courage and power to step forward and take a chance.”

Over the last three decades, more than 1,100 people have graduated from the adult program at Leadership Spokane, a nonprofit that the Spokane Area Chamber of Commerce and area business leaders created in 1982 to help foster civic leadership skills here. Outgoing Executive Director Linda Finney says recruitment during the past three years, despite a slight dip during the recession, has remained strong.

“We have lots of new companies represented. People are referred by alumni and through their companies, and new people to town who went through leadership programs in their prior city sign up,” Finney says, adding that she also does a lot of active recruiting by scanning local newspapers and social media sites such as LinkedIn and Facebook.

Leadership Spokane offers a civic leadership training program every year to a group of about 40 to 50 individuals from public entities, private businesses, and nonprofit organizations in the greater Spokane area. In recent years, it has added a smaller program for teens.

The adult program is comprised of 11 days of curriculum spread over 10 months, consisting of a one-evening orientation, a two-day retreat at Camp Lutherhaven at Lake Coeur d’Alene and nine one-day classes on different topics such as education, arts and culture, healthy communities, leadership, and communications. The program runs September through June.

Gaia Borgias Brown, executive director of the Inland Northwest Aerospace Consortium, a student in the current leadership class, says she has been impressed by the content of the ongoing classes she’s attended.

“I have referred everyone I know,” Borgias Brown says with a laugh. “It’s given me so much insight into so many aspects of the community that we all wouldn’t have otherwise experienced.”

Finney says, “The curriculum is challenging, topically relevant, and dynamic. It changes every year as the city changes.”

The cost for the program is $3,000 per student. If the cost is prohibitive for some individuals, there are a limited number of scholarships available, up to $2,000 per student. The organization budgets between $15,000 and $18,000 for scholarships every year, depending on need. The class of 2014 received about $14,000 in scholarships.

Alison Zecha, a local leadership coach who owns her own small business called Coach AZ, graduated from the program in 2007. After moving to Spokane from Hawaii several years ago, Zecha says she heard about the organization and thought it was a great way to get to know the community. She says she cultivated and nurtured many relationships with other business leaders through the program, “many I would not otherwise have met, and I had my eyes opened to all that Spokane has to offer as well as the challenges this community faces.”

She says she also discovered how to become involved where she could make a difference in her own way and provide leadership to make Spokane a better place. As both alumna of the group and a current facilitator of classes, Zecha encourages people to apply for the program.

Ultimately, Finney says, the organization itself models leadership. Finney herself is a finalist in this year’s Inland Business Catalyst’s Women in Business Leadership Awards.

“We invest in 50 people, and it’s important to those organizations (and their alumni) that we use our resources well. That we use stewardship and we are good stewards,” she says. “These people are going to be making policy decisions, hiring people, spending dollars, and directing resources, and they need to make good decisions as leaders.”

Finney believes the best decisions are made when there’s a wide array of hearts, minds, eyes, and backgrounds brought to bear.

It’s a justice issue, she says, because, “If we leave out any group of people within the community, it runs counter to what we say we are as a democracy.”

Finney estimates that she has gotten to know about half of Leadership Spokane graduates over the course of her 15-year tenure. Today though, she is almost ready to hand the baton on to her as-yet-unnamed successor and will retire in June.

“The graduates are an amazing group of people,” Finney says. “We recruit and cultivate people who want to enhance their leadership skills, form relationships with peers and business leaders, and gain skills that will serve them well in their civic and professional lives.”
She says she informed the board of her decision to retire early two years ago.

“I know that it can create alarms within an organization when leadership changes, and we needed to do it thoughtfully, carefully, and model good leadership,” she says, adding that she has seen the process go awry and harm other organizations, especially “when decisions have been played out in a public arena.”

Finney says she has learned a great deal during the last 15 years and has strong opinions on gender and leadership.

“I think there is a difference between men and women when it comes to leadership,” she says. “While it may be somewhat of a generalization, men tend to work in a ‘command and control way.’ In other words they say ‘this is due by this date, you can do this, I’ll do that and then … come back on this date.’ Command and control can be easier.”

She adds, “When you listen, solicit opinions, collaborate and cooperate, it takes more time. But if you do that, oftentimes it creates more trust and allows people to take risks and be more creative.

“Women (tend) to have a more collaborative way of (communicating) in general. That’s been my observation. Although sometimes you need to say, ‘The building is on fire and we have to leave,’ and lead directly—but most of the time we gain some things if we work collaboratively,” she says.

Potential students can apply independently to participate in the Leadership Spokane program, and candidates are chosen from a pool of up to 75 individuals. Applicants have to be dedicated to personal growth and integrity and committed to policy-level civic leadership, she says. Everyone who applies is granted an interview.

“I think we have about 60 people in the applicant pool for (next) year,” she says. “We are still sorting everything out.”

Finney says one of the core values of the organization is diversity, the idea that all sectors of the community should be represented and their voices heard, to ensure that the community as a whole is healthy and thrives.

“Cultural competence and diversity are important, and that means we each have to communicate and need to identify our values and be straightforward and honest,” she says. “We need to understand that so we can operate efficiently.”

The youth leadership program, founded in 1996 and named Youth Leadership Spokane, trains 25 to 30 high school students. The cost is $125.

Many times graduates from the adult program will bring in their own teenagers to the leadership retreats, Finney says. “The teens study servant leadership, are introduced to community issues and start to look at skills like project management, communication, interviewing, and philanthropy.”

The teen students are not necessarily the typical student body president with a 4.0 GPA.

“Often, YLS is a place where young people first find a ‘voice’ and, for some, it is where they make an important decision about whether their lives will take a positive and healthy direction—or not,” Finney says.

Youth Leadership Spokane has been run in partnership with the YMCA of the Inland Northwest since 2010.

Is there life after retirement?

Finney says she hasn’t seen her piano for a while and she also has three grandchildren ages 6, 4, and 2.5. “I will get to spend even more time with them than I already do. They are a delight.”

She may go back to school but doesn’t plan to jump into anything career related for at least six months.

Leadership Spokane has hired Red & Associates LLC, of Spokane, to do a national search for her replacement. “They know the organization and have brought in great candidates who are a good fit and will transition in well,” she says.

Leadership Spokane’s search committee currently has a list of 10 finalists which will be whittled down to four before the board hires a replacement.

Finney says she is proud of Spokane leaders for committing to leadership and investments they’ve made in business with the future in mind.  “It really gives people the courage and power to step forward and take a chance.”