Learning the publishing business in retirement

Some Spokane seniors intend to supplement income through writing 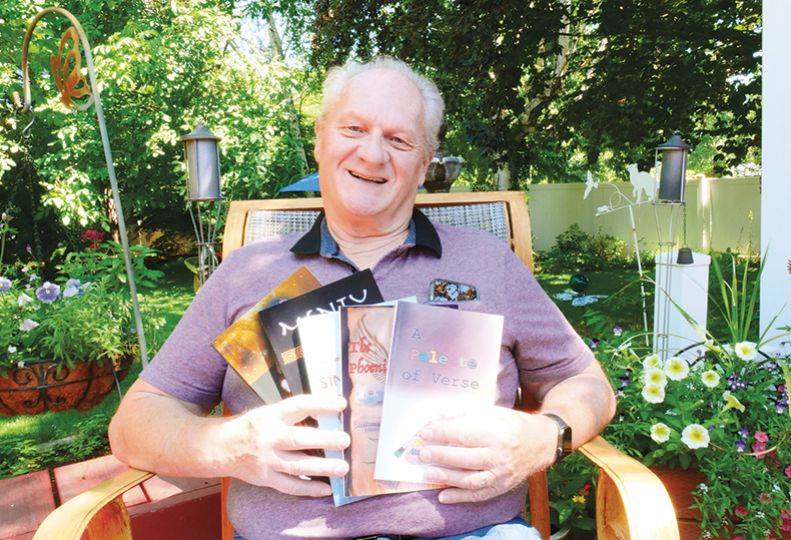 This year, Stephen Lalonde, a retired high school teacher, published his fifth book, “Anissi,” the final in a trilogy for which he says had a waiting list of people ready to purchase it. He is 72 years old.

David McChesney and Russ Ford are also retirees who have published books and are members of the Spokane Authors and Self-Publishers group. McChesney, who is in his early 70s, has published three books pertaining to the Age of Sail (1570 - 1860), and Ford, 68, has published two novels he describes as “techno thrillers.”

The three authors have used different methods of publishing from the myriad of options the industry offers. They are among Spokane-area retirees who hope to supplement their income through their love of writing.

Lalonde, who is in his fifth year in business since publishing his first novel in 2017, says he has broken even this year, and all sales for the rest of the year will be profit. He estimates that he has sold roughly 300 books since starting.

Lalonde is a member of several writing groups in Spokane, including Spokane Authors and Self-Publishers and Inland Northwest Writers Guild, in which he has made contacts and learned more about how to be in business as a writer.

“It’s a retirement activity, and I don’t want it to have a negative cashflow,” he says.

Lalonde retired in 2014 after 27 years teaching classical mythology and media production at University High School in Spokane Valley. His writing is influenced by his knowledge of the ancient world, and he also spends considerable time researching the 600 B.C. era for his historical novels. What he isn’t able to share in his stories, he publishes in a weekly “Historically Speaking” newsletter.

With the advent of technology, the dynamics of the publishing and self-publishing industries have been changing, making it easier for writers and authors to put their work out in the world, he explains.

For many retirees in the Inland Northwest, learning about self-publishing, hybrid publishers, and traditional publishers has helped many learn the trade.

For the first two books in his trilogy, Lalonde used Amazon’s self-publishing platform, Kindle Direct Publishing, through which his books can be read electronically or printed on demand, he says.

According to Amazon.com Inc., in 2019, authors earned more than $300 million from the Kindle Direct Publishing Select Global Fund. Since the launch of Kindle Unlimited KDP authors have earned more than $1.1 billion through the program, and, in 2019, more than 1,000 authors had royalties of $100,000 or more, Amazon says.

For his third book in the series, however, Lalonde decided to print through Spokane-based Gray Dog Press after the owner, Russ Davis, led a presentation at a meeting of the Inland Northwest Writers Guild.

Lalonde says he believes Gray Dog Press’s print quality is better than Amazon’s and he’s willing to pay extra for that.

Because of a shortage in paper supply, Lalonde’s cost to print each book with Gray Dog Press was  $6.65. He sells them for $10.95.

“Russ, in my opinion, is magic. He is tremendously supportive of local writers,” Lalonde says.

Lalonde says he has been thinking about raising funds via global crowdfunding company Kickstarter to reprint his first two books through Gray Dog Press and sell them as a bundled trilogy package.

He claims several members of the writing groups that have grown their fanbase have been successful with the fundraising platform.

Lalonde says he has grown his readership through social media, word of mouth, craft fairs, and yard sales.

According to Kate Bernyk, senior director of communication for Kickstarter, since the corporation launched in 2009, pledges to publishing projects have totaled $285.5 million.

McChesney retired in the summer of 2017 and is the current treasurer for Spokane Authors and Self-Publishers group. A sailor in the Navy for 22 years, he says his first novel “Beyond the Ocean’s Edge” was first written when he was in high school. He returned to it when he was nearing retirement and reworked the decades old story into a finished book.

However, McChesney says he found a lot of errors in the finished products. For his third novel, he hired retired author, freelance writer, and editor Sue Eller to edit his manuscript. Eller charges a half-cent per word to proofread and edit a writer’s work line by line. She also is the current president of the Spokane Authors and Self-Publishers.

Another member of the group did “beta reading” or developmental editing for his third book.

McChesney claims that the whole process was much cheaper than using a hybrid publisher, and he was happier with the editing. He estimates he paid Eller roughly $600 to edit and deliver a finished manuscript.

“Sue charged me much less and did all the formatting. All I had to do was upload it to KDP,” says McChesney.

His books are listed for $13.95 on Amazon and he receives about $3 in royalties per book sold.

Russ Ford is semi-retired from safety services and real estate. His first novel, “de-pop” about population control, was an idea he says he had for 15 years before he sat down to write it.

He published it in 2015 through a Seattle-based publisher that was recommended to him. However, that publisher charged $30,000 to publish his book plus additional costs, says Ford.

“We won’t be going that path again,” he says. “It became very cumbersome, somewhat adversarial, and very expensive.”

At the time, he was working in British Colombia and didn’t understand the process, but quickly became educated.

For the sequel, “re-ring,” he changed his business tactics and printed his books through Gray Dog Press for roughly $1,500, he says.

Ford says he has sold about 150 copies of the sequel and is working on a third book in the series about the Hanford Nuclear Reservation, in the Tri-Cities area, where he worked in waste treatment projects.

He claims that one of the strengths of his business plan is the roughly 75 beta readers who review his manuscripts and give him feedback.

“The whole one-man band doesn’t exist anymore,” says Ford. “I would encourage any author to have beta readers who are not your friends and can be honest and brutal.”

Ford says he was in conversations about turning “de-pop” into a film in 2020, but such talk stalled due to the onset of the pandemic. He adds that his marketing techniques include sending out free copies to contacts on his LinkedIn and Facebook accounts, which eventually led to him meeting a film director and producer.

However, Ford says he is realistic in his approach and simply enjoys writing.

“If you’re thinking about writing and have an idea for a story, don’t wait,” advises Ford.