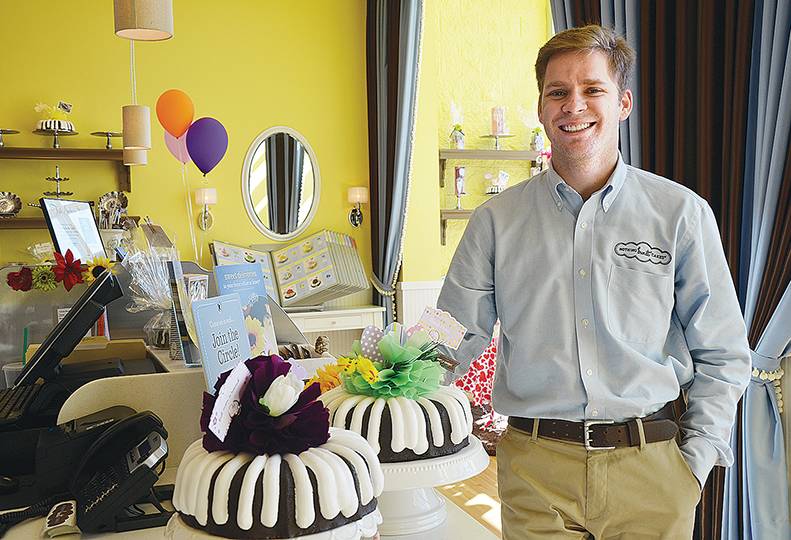 -—Judith Spitzer
Samuel Canty displays two of the most popular cakes at Nothing Bundt Cakes, at 2525 E. 29th, on Spokane’s South Hill. 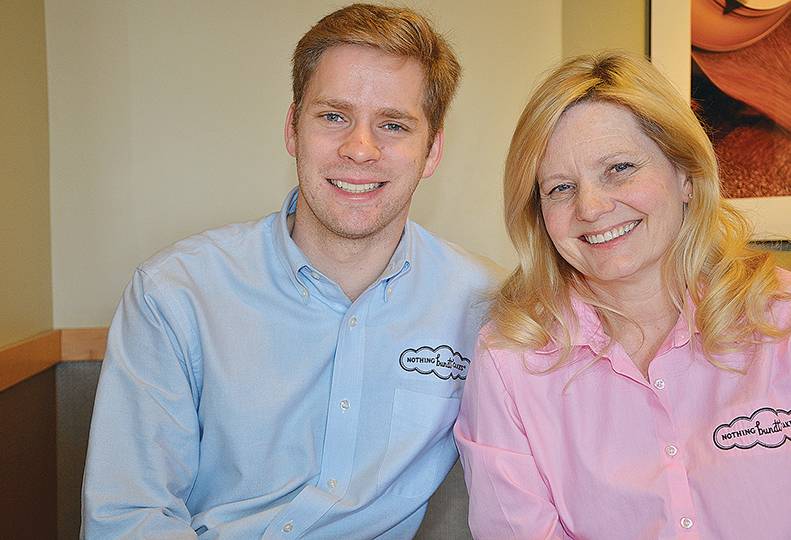 Samuel Canty, 25, and his family were on their way to brunch with friends one Sunday when his mom, Jolyn, realized she had forgotten to bring the coffee cake she’d promised the host. Earle, Sam’s father, offered that he had eaten “‘the best thing you’ve ever tasted” at his office recently from a place called Nothing Bundt Cakes in the San Francisco Bay area, where they were living at the time.

They stopped at a Nothing Bundt Cakes store and bought a lemon bundt cake. Sam, who wasn’t that keen on any kind of cake, tried the fluffy, homemade-tasting bundt cake with cream cheese frosting and agreed.

“For Sam, that was it,” says Jolyn. “He ran out to the car and was Googling the company to find out more about it.”

When they realized it was a franchise and that Spokane was one of the potential sites available, Sam loved the idea of coming home to the Pacific Northwest to start a business.

Last October, the mother-son team of Samuel and Jolyn Canty, who are originally from the Hayden, Idaho, area, opened Nothing Bundt Cakes at 2525 E. 29th on Spokane’s South Hill, as the first Nothing Bundt Cake franchise in the state.

The Cantys operate the bakery out of a roughly 1,800-square-foot space in a strip mall in the Lincoln Heights neighborhood.

Besides the Cantys, the bakery employs 11 people, including one full-time baker and 10 part-time, mostly-college students who do everything from baking to dishwashing to decorating the cakes from predesigned kits and, of course, delivering the cakes. Jolyn Canty is in charge of marketing and just about anything else that needs doing, while Sam manages the business side.

The total investment to begin operating a Nothing Bundt Cakes franchise ranges from $340,000 to $480,000 which includes a $25,000 franchise fee, signage, equipment, initial inventory, and working capital of about $40,000. After the franchise is open, there is an ongoing royalty fee of 5 percent net income and a 3 percent fee of net income for advertising.

Earle and Jolyn Canty have three biological children and three they have adopted, Sam being one of the latter. They adopted him at age 2 from an orphanage in Romania, says his mother, who had to battle on Sam’s behalf to become a franchisee with Nothing Bundt Cakes.

His mom went to bat for him at a meeting with the parent company’s owners, telling them if they knew who her son was and what he’d done, they would approve him. After all, while he and was earning his bachelor’s degree, he also nearly earned his pilot’s license, was a member of the ROTC. He had dabbled in politics, substitute teaching, and had researched several other franchise opportunities.

The owners finally agreed to approve the mother and son with the caveat that they partner up as a team and Jolyn would agree to work at the store as marketing manager.

Sam, a graduate of UCLA, says the approval process was a long one. “I started the process in September 2012 and finally was approved the last week of February 2013,” he says.

“So, I’m his sidekick,” his mother says with a smile.

The cakes themselves come in either an 8- or a 10-inch size decorated with one of 40 designs based on holidays and other celebrations such as birthdays, and are frosted in a trademarked pattern called leaves. The store offers 10 flavors plus a special seasonal flavor, including the store’s most-popular white chocolate raspberry, red velvet, chocolate chocolate chip, and lemon. They also come in bite-sized morsels sold by the dozen called Bundtinis and smaller one-serving Bundtlets --all topped with the signature frosting made from cream cheese, real butter, and vanilla. Larger, tiered bundt cakes are also available and serve up to 30 people. They offer a gluten-free option in the bundtlet size as well.

The Cantys’ opening of the store here was a homecoming not only for them but also for Nothing Bundt Cakes franchise co-founder Debbie Schwetz, who grew up in Spokane, graduated from Lewis & Clark High School, and was crowned Lilac Princess in 1975. She graduated from the University of Washington in Seattle and later married and moved to Nevada.

She and her husband ended up in Las Vegas in 1981 where she started to raise her family. In 1998, she and close friend Dena Tripp were mulling over what type of business to start when they came upon the idea of combining Tripp’s fluffy, moist, homemade bundt cake with Schwetz’s signature cream-cheese-and-real-butter frosting. Then they set out to find a way to frost the cakes in a unique pattern.

“Bundt cakes are hard to frost with all those hills and valleys and the big hole in the middle. We wondered if we used Dena’s bundt cake recipe and my frosting if we could make it work as a business,” Schwetz says. Although their respective husbands told them it was a bad idea for a business, the two women forged ahead with a business plan and set a goal of selling 10 cakes a day, which they did for several months.

“We didn’t know a whole lot about business, but we figured out we could cover our costs and expenses at that rate,” she says. Then one day they got orders from two companies to do 400 cakes a month. That was the impetus to open a storefront.

The two women opened the first Nothing Bundt Cakes store in Las Vegas in October 1998 and their cakes were such a big hit during that holiday season they had to completely close down for three days to keep up with demand.

“It wasn’t that popular then to have a business that wasn’t more diversified,” she adds.

Two years after a very successful run in Las Vegas, they opened two more Nothing Bundt Cakes stores in Phoenix for a specific reason.

“We wanted to learn to do a remote location,” she says. “We wanted to see if we could do it with a manager on site but a location that was close enough (to us) that we could be there if need be.”

That idea didn’t work out well because their manager “took advantage of the situation,” Schwetz says. They decided, after several people approached them about franchising though, to research the topic and consult with other people who also had franchises. Ultimately they developed a program they felt comfortable moving forward with.

“Selling franchises is very complicated,” she says. “It was important to us to do it right.”

In 2007, the first franchisee opened a Nothing Bundt Cakes’ store  in San Diego and today they have a total of 89 open stores with another 11 scheduled to open by mid-July. The next two Nothing Bundt Cakes outlets in Washington state are expected to open in the Seattle area, in Mill Creek and Issaquah, in August 2014.

The Spokane location was a natural for Schwetz who still has many friends and family here. She was in the store here in October to help the Cantys with their grand opening and says she gets back to the area frequently for visits.

“It was exciting to see my (business) name go up on a business in my hometown,” she adds. “Spokane has a special place in my heart. I love Spokane.”

Schwetz is the founder of another company called Shipp that makes and distributes the dry ingredients for the cakes, as well as the accoutrements and designs for the franchise.