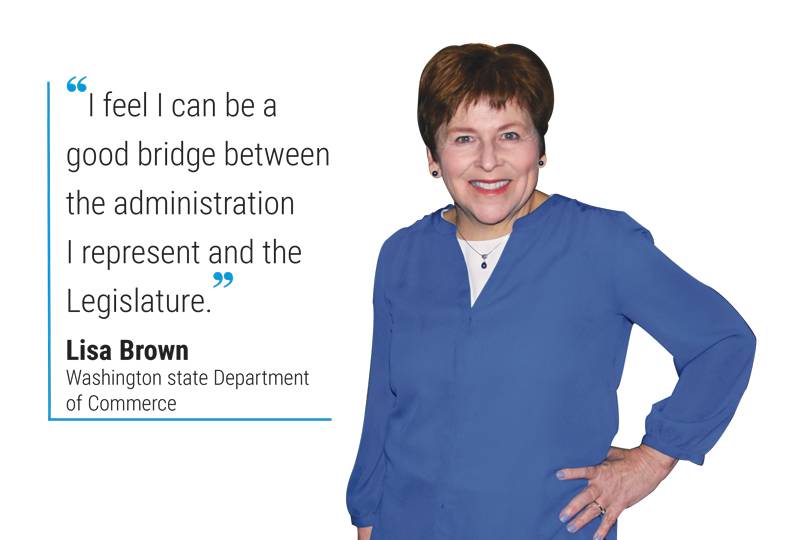 Veteran Spokane politician Lisa Brown has started a new role as director of the Washington state Department of Commerce, a position that she hopes will be enriched by both her previous experience serving in the state Legislature and her time spent living and working on the eastern side of the state.

“This position is a chance to continue working on things I’m interested in and care about,” says Brown. “Coming from Eastern Washington and knowing the agency wants to take a statewide focus, I bring that perspective to this work as well.”

As the three were each hired separately, for different roles, Brown says she hadn’t previously met Nielsen but was familiar with Toth’s work from her time spent on Greater Spokane Inc’s board while serving as WSU chancellor.

“I also was aware of the aerospace work being done in Eastern Washington, having worked on some of the land acquisition on the West Plains while I was serving in the state senate,” she says.

Brown says she and her colleagues in Commerce are keeping an eye on Washington’s aerospace industry, as Chicago-based Boeing Co. considers the launch of its new middle-market airplane, the 797, which would fill a gap between the narrow-body 737 MAX and wide-body 787 Dreamliner.

Brown, along with Spokane International Airport CEO Larry Krauter, was appointed recently to the governor’s Choose Washington New Middle-Market Airplane Executive Council, which is tasked with convincing Boeing to choose Washington state for the design, production, and final assembly of the new aircraft.

Last month, the Journal reported on efforts to attract Boeing to the West Plains, an area which could offer the company a shovel-ready site for a facility that would be close to its supply chain.

However, a March 10 crash of a Boeing 737 MAX aircraft, coming just five months after another crash involving the same type of aircraft, has caused aviation regulators in many countries along with airlines and passengers to question the safety of Boeing’s latest aircraft models.

“Regardless of what happens with this most recent situation, this next generation of aircraft is of great interest to all of Washington state,” says Brown. “I can say that we’re still actively engaged in discussions on what’s next for this aircraft (the 797).”

“Spokane has the Smart Cities Initiative in the U District, and there are a lot of other exciting things happening in Eastern Washington, including the solar farm in Lind and new wind farms,” she says. “The things we’re doing now in this sector will have big implications for us in the future.”

Brown has made two overseas trips recently that focused on business development agreements and investment in clean energy.

The first was a trade mission to Spain last month, in which Brown and several other officials toured clean energy company Iberdrola. The company’s subsidiary, Avangrid Inc., is working with Puget Sound Energy on the Lund Hill Solar Project in south central Washington’s Klickitat County, which is expected to be the state’s largest solar farm.

“We met with Iberdrola and toured the facility there, and after we left, they announced a partnership that will build a major solar project in central Washington,” she says. “This is the first time they’ve made a memorandum of understanding with a state rather than a country, and it’s a wonderful acknowledgement of our partnership that we hope will result in more clean energy projects and investment here in Washington.”

During the trip, she met with officials from the American Chamber of Commerce Japan and the Japan Bank for International Cooperation, to discuss strengthening economic and trade relations, as well as support for and coordination on clean energy partnerships and opportunities.

Brown says she’s excited to work with Commerce on partnerships in Eastern Washington that are engaged in the development of cross-laminated timber, a wood panel consisting of layers of wood glued together to form sturdy structural panels, that’s swiftly becoming a common building component.

“It’s an exciting product because it contributes to forest health, strengthens the wood industry, and it sequesters carbon, which contributes to a clean energy economy,” she says. “It’s such a triple win, and Washington is on the forefront of it.”

She notes that Katerra Inc., which is constructing a CLT plant in Spokane Valley and Colville, Wash.-based Vaagen Bros. Lumber Inc., which has a new CLT press, are leaders in the effort to produce such mass timber products.

One of Brown’s goals is to ensure all of the department’s programs and services designed to assist families and businesses continue to be accessible.

When it comes to economic development projects taking place on the east side of the state, Brown says there are several she’s interested in continuing to support, starting with the Vision 2030 imitative led by Greater Spokane Inc.

“I know the Vision 2030 process is looking at taking our health and life science research to the next level,” she says. “I’m looking forward to connecting our sector lead and activity at Commerce with that process.”

Another area in which Brown says she sees Commerce interacting with the eastern side of the state is that of homelessness and affordable housing.

“There’s a lot of attention on those issues on both sides of the state,” she says. “Commerce has the Housing Trust Fund and Office of Youth Homelessness, and we remain engaged in policy around affordable housing.”

In her new role at Commerce, Brown succeeds former director Brian Bonlender, who held the position for six years before announcing he was stepping down in December.

Brown previously served as chancellor of Washington State University Spokane where she worked primarily in health sciences and played a major role in the creation of the new Elson S. Floyd College of Medicine. She resigned her post at WSU to run for Congress in 2018.

“For me the move to Commerce was perfect timing,” she says. “I’d left WSU behind to focus on my campaign for Congress, and I’m very familiar with the agency, having helped start several of the programs it currently manages while I was serving in the Legislature.”

“I’m used to working with legislators, senators, representatives, Democrats, and Republicans, and I understand how the state budgeting process works from both the operating and capital sides,” she says. “I feel I can be a good bridge between the administration I represent and the Legislature, where I still have many former colleagues and relationships.”

Commerce works with local governments, businesses, and civic leaders to strengthen communities across the state. Brown says the department has 11 employees in its downtown Spokane office, at 10 N. Post, and a total of 316 between its offices in Olympia and Seattle.

She describes the department as managing a broad scope of programs, including housing and community services, economic development and competitiveness, energy, and programs that assist local governments with infrastructure funding.

“Every sector has a lead person who understands what’s next for that industry and helps to ensure our state and regional economies are well positioned to take advantage of upcoming opportunities in each,” she says.

Despite losing her congressional race in the fall, Brown says she learned a lot from her time campaigning in each of the 10 counties in Eastern Washington’s 5th congressional district.

“That’s been valuable experience in my new position, because our core mission is to strengthen communities, and addressing the needs of rural and underserved areas is one of our priorities right now,” she says. “All of these areas are so geographically interesting and diverse, and I got to see and appreciate firsthand what some of the more rural communities are doing to reinvent themselves.”