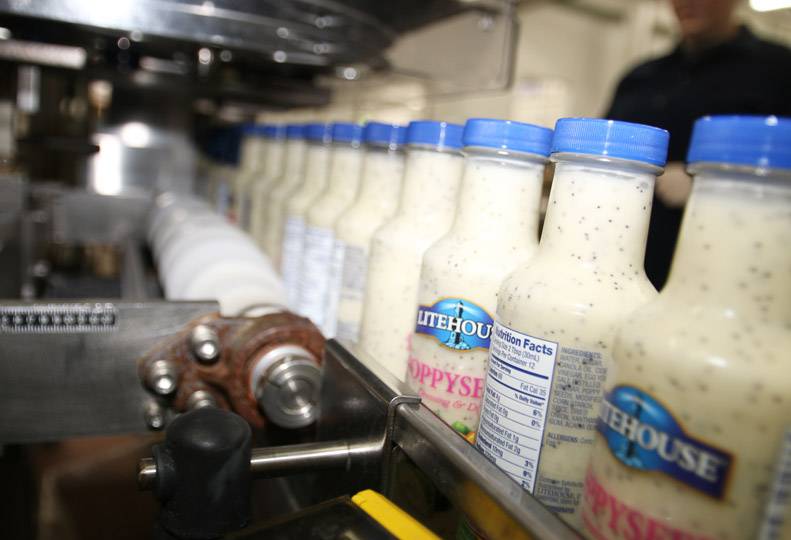 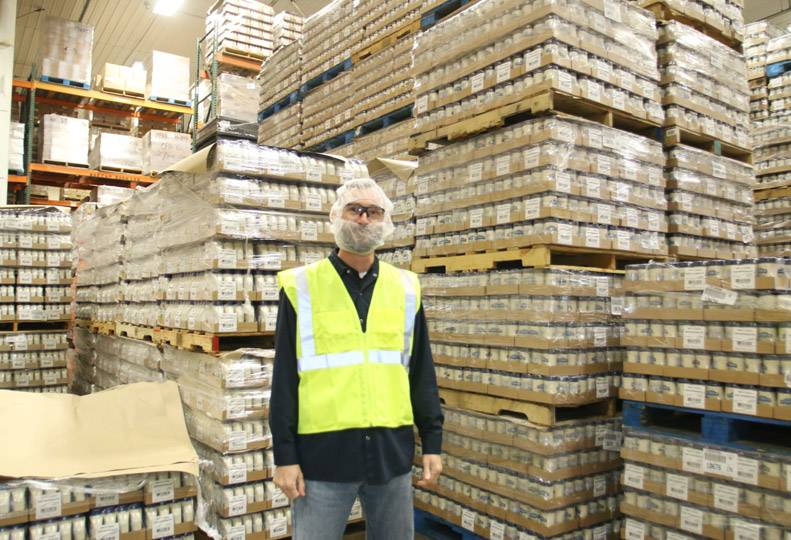 -—Mike McLean
Ben VanGerpen, Litehouse director of Sandpoint operations, says the cooler at the Sandpoint plant is regularly filled to near capacity in preparation for the company’s peak weekly shipping day.

Litehouse Inc., the Sandpoint-based salad dressing maker is in the midst of a $6.2 million expansion project at its Sandpoint manufacturing plant where it hopes to continue increasing its production and its workforce.

The company plans to break ground before year-end on a new, 26,000-square-foot cooler on the north end of its manufacturing facility, says Jim Frank, Litehouse CEO.

The 120,000-square-foot complex is in an industrial area at 1109 N. Ella, about a mile northwest of Sandpoint’s central business district.

“We’re going into a big renovation of the entire facility and grounds,” Frank says.

The overall project includes a recently completed $1.3 million, 4,000-square-foot wastewater treatment facility in a separate building on the northeast portion of the manufacturing complex.

The cooler phase of the expansion will free up the plant’s current refrigerated space, Frank says.

“Then we can use that space inside to expand production with more manufacturing equipment to keep up with our growing capacity needs,” he says.

Ben VanGerpen, Litehouse director of Sandpoint operations, says the current industrial cooler, which is larger than some high school gymnasiums, often is stacked and filled to near capacity as products are readied for weekly shipments via the Litehouse fleet of trucks and refrigerated trailers.

Equipment upgrades will include more automated packaging systems, he says.

New construction also will include modern loading docks that will be level with semitrailers. The loading docks currently are at ground level, meaning shipments have to be lifted onto and off of trailers, VanGerpen says.

“The dock will speed up the loading process dramatically,” he says.

Frank says construction is slated to begin in December with site work, footings, and concrete work.

“There will be some demolition work to get the pad site ready,” he says.

The project is scheduled to be completed next June, although Litehouse still is in the process of selecting a contractor for the next phases, Frank says.

“We’re looking at everyone we can possibly use locally,” he says. “We feel confident in the talent and skill set of contractors in Sandpoint and North Idaho.”

Litehouse is designing much of the project in-house, Frank says.

“We’ve been doing about six months of nonstop hiring of manufacturing employees,” Frank says. “We’re doing the same at our other facilities around the country.”

The company’s other manufacturing facilities are in Utah and Michigan.

“We’re looking at growth throughout the nation and putting additional growth into whichever facility makes sense,” he says, adding, “The biggest driver with the Sandpoint facility is it’s time to update.”

The company also operates a cheese-manufacturing facility in downtown Sandpoint and a buttermilk plant on the northeast outskirts of town.

Two years ago, Litehouse bought the 35,000-square-foot administration building on the former Coldwater Creek Campus on the north edge of Sandpoint and relocated its corporate headquarters there from the Ella Avenue complex.

Frank says the company is enjoying double-digit sales growth due both to new product offerings and growing geographic market penetration.

In addition to a variety of refrigerated dressings, Litehouse also makes bleu and gorgonzola cheeses, dips, herb and spice blends, and apple cider.

The company’s recent successful innovations include its new Opa line of pourable dressings made with Greek yogurt, Frank says.

“It’s resonating with younger consumers looking for those types of products,” he says.

Litehouse products also are being used in a growing number of party tray, produce, and deli applications, he says.

Litehouse is expanding its distribution network, especially in the eastern U.S., where it’s emphasizing an integrated marketing campaign through conventional and social media, he says.

“We’ve made investments on the sales and marketing side to fuel growth,” Frank says. “In the retail channel, we’ve added a significant amount of people on the East Coast.”

As a 100 percent employee-owned company, the future of Litehouse is predicated on growth, Frank asserts.

“That’s definitely how we go about everyday business—innovating new products, building better relationships, and creating new channels we haven’t seen before,” he says. “We feel there are many potential customers and many opportunities left.”

Frank declines to disclose current revenue figures, but earlier this year told the Journal the company had increased annual sales and its number of employees by nearly 100 percent since 2010. That year, the company reported annual revenue of $120 million.