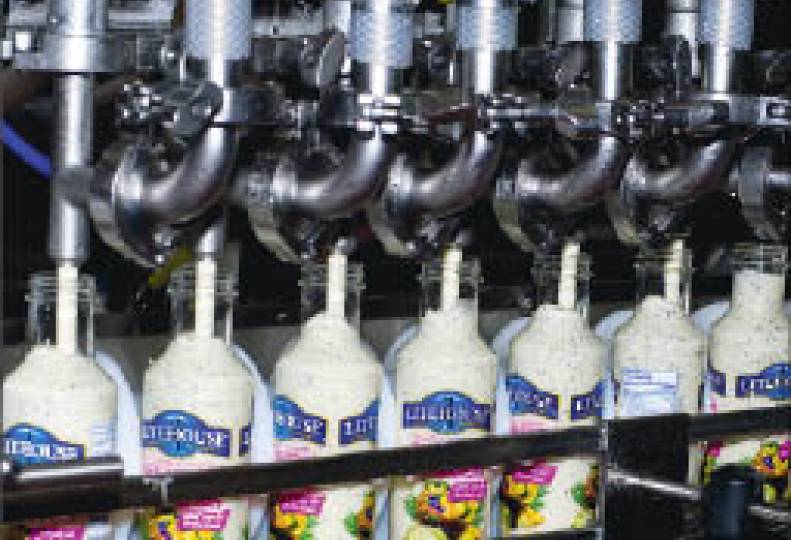 -—Photo courtesy of Megan Owens
Litehouse bottles its Poppyseed dressing in Sandpoint with an English and French label for sale in Canada.

Within five years, the company aims to increase its sales by about 78 percent, and hopes eventually to be one of the top 10 food producers in the country, he says. The company does not disclose its sales.

Frank says the employee-owned company made a decision to not back off of its efforts to expand when the economy tanked in 2009, and has backed up its resolve with specific plans, such as increasing its marketing, expanding its product line, going into new sales territories, including in Chicago and other markets nationwide, and investing more, rather than less, in research and development.

"It's an aggressive goal, and we're putting together the plans to do that," Frank says.

Those plans include expansion in several ways, from expanding its products and where they're available to growing market share where the company is already, to moving into different kinds of stores and departments within stores.

Litehouse plans to add lemonade and sweetened and unsweetened bottled teas this year to a line of ciders it launched last fall, all of which will be bottled at Joanna Beverage Co., of Spokane, says Paul Kusche, Litehouse's vice president of marketing and innovations.

Also, the company just launched a line of 20 products, including eight salad dressings, as well as caramel, chocolate dips and Litehouse's strawberry glaze, throughout Mexico, for which it has created plastic packaging that's less cumbersome, Frank says.

The company hopes to tap into a market of about 35 million consumers in Mexico who shop at stores such as Wal-Mart, and the Soriana and Futurama, grocery chains, Kusche says.

In the U.S., instead of being satisfied to market products in the produce sections of supermarkets, where its refrigerated dressings have had a longtime home, Litehouse now is setting its sights on grocery-store delis for a new line of cheese it's launching. It's a new way the company has found to showcase the talent of its resident cheese maker, Ralph Stuart, who one company executive calls a "rock star" in the cheese world, by launching a line of artisanal cheeses that will be sold in supermarket delis and also in wineshops or other specialty stores, Kusche says.

Litehouse has invested heavily in both marketing campaigns and research and development and has added some staff positions in both of those departments, in order to grow market share and diversify its product line, Frank says.

The company has about 500 employees altogether, including 340 at its Sandpoint plant and headquarters, and another about 150 at a plant it operates in Lowell, Mich., along with some temporary employees at different times.

Frank says Litehouse's investment in creating new products to broaden its reach will continue to drive its growth.

"Our commitment to innovation is the lifeblood of our company," he says.

It's proved to be a successful strategy in rolling out new products, such as a line of varietal apple ciders Litehouse introduced last fall, Frank says. This year, Litehouse expects to sell about 3.75 million gallons of cider nationwide, up from about 500,000 gallons last year, all of which was sold in the western U.S. between September and December. The company has committed to using all Washington-grown apples in its cider production, which will strengthen the brand recognition, Frank says.

Frank says Litehouse has been aggressive in its marketing program for both new and established products as it seeks to create a more nationally and, ultimately, internationally recognized name, eyeing Latin America and Asia, and Europe as potential future markets. It has gained market share for its signature refrigerated salad dressing line in two big markets, Sacramento and Minneapolis, by concentrating on advertising in those markets. Frank says that over the past year, Litehouse has become the top selling brand of refrigerated salad dressing in Minneapolis, up from its previous position as the second-biggest, and moved up from third best-selling to second-best in Sacramento.

Litehouse has added social media to its marketing mix, and has worked on revamping its Web site, buying banner advertising on the Internet, and adding a healthy-recipe Web site using its products to engage consumers further, Kusche says. Though it's hard to quantify the benefits of that approach as far as hard sales numbers go, the company sees a strong social media presence as another way to build brand recognition, Kusche says.

Frank says that though Litehouse has land available in both Sandpoint and Michigan for expansion of its production facilities, it still has capacity to increase production in its current facilities and has no plans to expand its plants yet.

With its permanent employees and some occasional temporary hires, the company can ramp production up or down as needed, he says, and for now it expects to remain fairly stable on the numbers of people it employs. The positions it has added recently mainly have been in marketing and product development, which the company sees as key ingredients for moving toward its aggressive goals, he says.

Kusche says the company will continue to emphasize development of new products, and is in the process of installing a research-and-development kitchen in one of two former houses it has bought adjacent to its Sandpoint factory. There, a team of nine food developers will come up with new products for the company, he says.

"We're looking at all avenues of growth, not just adding another bottle of dressing," Kusche says.