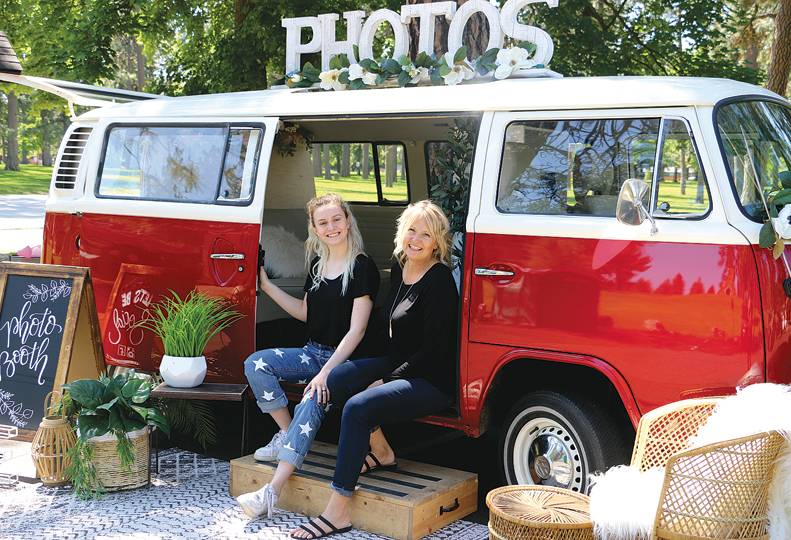 -—Virginia Thomas
Kyla Haggerty and her mother, Deanna Haggerty, started Little Photo Bus Company as a reason to buy one of the iconic Volkswagens.

“Whenever we’d see one, we’d say, ‘It would be so cool to own one of those.’ But there was never really a reason to have one,” Kyla says.

About two years ago, the pair found a reason to own their dream vehicle: as the centerpiece of their mobile photo booth business, Little Photo Bus Company LLC.

Deanna says that when it came time to take Kyla’s high school senior pictures in 2016, the two had decided that a Volkswagen bus would make a perfect prop. Deanna began searching online for vintage buses for rent, and during that search she encountered a business in Utah that was offering a vintage bus as a photo booth for events.

“I started investigating more and started thinking that we could do this,” Deanna says. “We never did find that bus for her senior photos, but we did find the business idea.”

Deanna found a 1976 Type 2 Volkswagen bus for sale in the Spokane area, bought it, and began the process of restoring the vehicle.

“It took us about a year and a half to have it completely restored,” Deanna says. “We changed its color. We had our body guys take it all apart, basically stripped it inside and outside, and then we rebuilt it.”

She says that while the bus can be driven for short distances, she typically hauls the bus behind her own vehicle to ensure they arrive at their destination. Between events, the bus is kept in a storage unit near Haggerty’s North side home.

While the bus was being restored, Deanna and Kyla worked to set up the business, and Little Photo Bus Company was launched in early 2018.

Deanna says when she told her friend, Chrissy Dunham, about the idea, Dunham quickly decided to launch Little Photo Bus in Portland, where she lives.

Deanna says the Spokane side of the business will soon add another vehicle, a blue 1978 Type 2 Volkswagen bus.

“I have two weddings on June 22, and we’ll be launching our other bus that day,” Deanna says.

Little Photo Bus is nearly booked up for the summer, she says, though a few weekends are still open.

“I get inquiries every day,” Deanna says. “I definitely have doubled what I did last year already.”

The business is seasonal, she says, running from early spring through early autumn. Little Photo Bus is primarily hired for weddings, though Deanna says it’s also been rented for birthday parties, photoshoots, and other events. She says most clients find Little Photo Bus through Instagram.

The photo booth is much like a conventional photo booth, with a touchscreen that starts a 3-second countdown. Each guest immediately receives a print of their photo, and guests can visit the photo booth as frequently as they wish. At the end of the event, the host — typically a bride — receives a USB drive loaded with all of the photos from the evening.

Deanna says she uses a digital single-lens reflex camera hooked up to a laptop that runs photo booth software so that guests receive high-quality photos and so she can fix any technical issues on the spot.

“The great thing about the whole system we have set up in the bus is that it pretty much runs itself, so we can sit and hang out and talk to people,” Kyla says. “It’s fun to hear people’s stories when they come in. … There’s a sense of nostalgia that comes with it that people connect with.”

Children are especially enamored of the photo booth, Deanna says, and often leave an event with a stack of photos.

Deanna and Kyla are the only employees of Little Photo Bus here, Deanna says, though Deanna’s son, Nick, helps out occasionally.

“It’s an awesome business model because I don’t have to be at a storefront every day,” Deanna says. “I can do my work out of my office. I don’t have to go out until I’ve got a gig.”

Kyla adds, “There’s really no need to have anybody else. It makes it easy that it’s just us.”

With the addition of the second bus, Deanna says Little Photo Bus could get so busy that she needs to hire additional employees.

“If we get super busy, then I’ll start hiring people, if we just can’t handle it anymore,” she says.