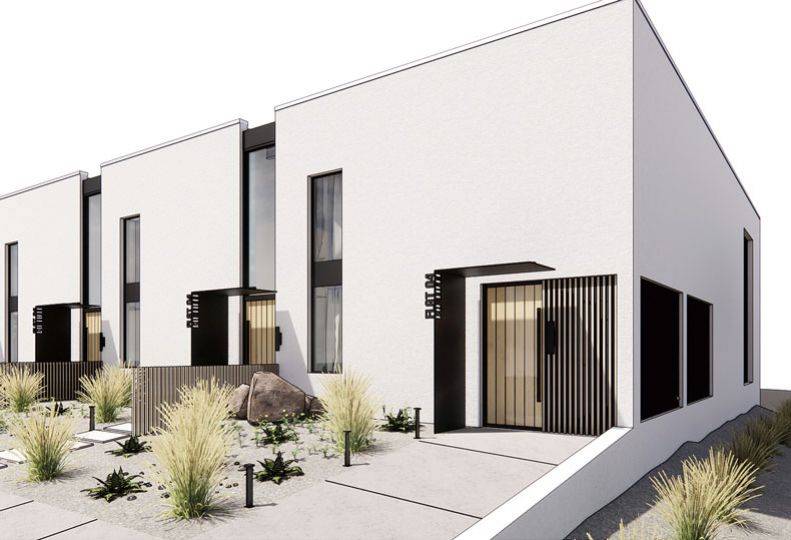 Plans to redevelop the 56-year-old Northwest Microfilm warehouse building, located at 441 W. Sharp, have changed to residential use from a bar and restaurant concept, says Jordan Tampien, a Spokane real estate developer and owner of 4 Degrees Real Estate.

“We’ve owned the building for a little while now,” he says. “We were going to put a restaurant in there, and that’s not very desirable right now, so we switched to the housing option.”

A change-of-use and remodel permit application was filed in late December by Spokane-based Trek Architecture requesting that the city of Spokane approve the conversion of occupancy to residential use from commercial.

The residential units would occupy the 12,000-square-foot former microfilm warehouse, which originally was built in 1967 with one story and a mezzanine, according to Spokane County Assessor’s Office records.

“One of the cool things we’re doing here is this indoor-outdoor space that will have a sliding door that goes out to an exposed patio area for each unit,” he says.

The exterior of the cinderblock-built structure will have windows added to bring natural light to the interior spaces, he says. The inside of the building will be split into five 1,200- to 1,300-square-foot units, including loft space and the outdoor patio in each unit.

The apartments each will have two bedrooms, including one bedroom on the mezzanine, and a den.

The onsite parking lot will be fenced for security, he adds.

Tampien says Sharp Flats will be similar to Lolo Lofts, at 1229 W. First. That project called for the conversion of a two-story office building on the southeast corner of First Avenue and Adams Street, in downtown Spokane, into 11 loft-style residential units.

He says the Lolo Lofts were leased quickly and that helped him determine that similar commercial-to-residential conversion projects could be worth pursuing in the future.

“We’re just testing this concept because there are so many of those buildings out there, and this one seemed like a low barrier of entry to test the concept,” says Tampien. “It’s not too big of a project to test this. This is a good size for it.”

If the Sharp Flats project is a success—measured by rent per square foot—then he will look for additional warehouse-to-residential development opportunities.

The Sharp Flats apartments will be priced at, or just above, market rate, he adds.

Spokane Valley-based T.W. Clark Construction LLC is the contractor for Sharp Flats, and the Spokane office of DCI Engineers is providing engineering services.

Tampien says the units could be available for either long-term or short-term rentals.

“Since it’s so close to the arena and all that, we could do it short term,” he says. “This will be a test of building something with a little more living space in it to see if that’s desired near downtown.”

Salt Lake City-based Maverik Inc. plans to construct a 5,600-square-foot convenience store in North Spokane, at 3615 E. Francis, a block east of the North Spokane Corridor, according to a commercial pre-application on file with Spokane County.

A contractor isn’t listed for the project yet.

Maverik operates 11 stores in Spokane County and five in North Idaho, according to the company’s website.